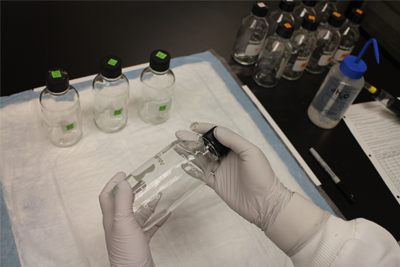 The use of insecticides to kill mosquitoes that spread Zika, dengue, and chikungunya viruses, is one part of an integrated mosquito management program. Insecticides may be used by professionals and by homeowners. Insecticides can be applied by hand (indoor and outdoor sprays and foggers), by truck, or by aerial (airplane) spraying.

How Insecticide Resistance is Measured

Monitoring for resistance in the vector population is essential and is useful in determining the potential causes for control failures, should they occur. CDC has developed an assay to determine if a particular insecticide active ingredient is able to kill mosquito vectors. The technique, referred to as the CDC bottle bioassay, is simple, rapid, and economical compared with alternatives. The results can help guide the choice of insecticide used for spraying.

Programs in the continental United States and its territories can order free Insecticide Resistance Kits by sending an email to USBottleAssayKit@cdc.gov and requesting an order form. Kits include bottles, insecticide, and manual.

How the Bottle Bioassay Works