The U.S. drug epidemic is evolving, including among women. Studies have highlighted rising rates of drug overdose deaths among women aged 45–64 years.

Overdose deaths continue to be unacceptably high, and targeted efforts are needed to reduce the number of deaths in this evolving epidemic, including those among middle-aged women. 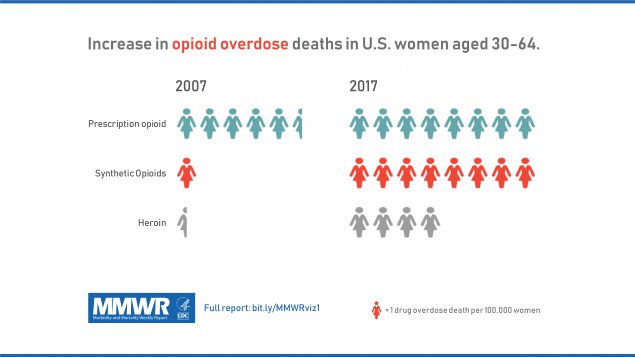 Mortality data for U.S. residents were obtained from the 1999–2017 National Vital Statistics System,* which is based on information from all death certificates filed in the 50 states and the District of Columbia. Deaths of nonresidents (e.g., nonresident aliens, nationals living abroad) were excluded. Mortality data were provided to CDC’s National Center for Health Statistics through the Vital Statistics Cooperative Program and coded according to the International Classification of Diseases, Tenth Revision (ICD-10). Analyses were restricted to deaths with an underlying cause of death based on the following ICD-10 codes for drug overdoses: X40–X44 (unintentional), X60–X64 (suicide), X85 (homicide), and Y10–Y14 (undetermined intent). Among deaths with drug overdose as the underlying cause, the type of drug involved was based on ICD-10 codes for antidepressants (T43.0–T43.2), benzodiazepines (T42.4), cocaine (T40.5), and opioids (all T40.0–T40.4 and T40.6, including those for heroin [T40.1], prescription opioids [T40.2–40.3], and synthetic opioids, excluding methadone [T40.4]). Deaths involving more than one type of drug were counted in multiple categories. Crude rates are reported as deaths per 100,000 population. Percent change was calculated on unrounded rates. Joinpoint regression† was used to test the significance of overdose trends from 1999 to 2017. Annual percentage change estimates that were statistically significant (p<0.05) are presented to indicate the magnitude and direction of significant trends. Age distribution changes in drug-specific overdose deaths were calculated by 5-year age groupings, with average age of death analyzed for drug type for the years 1999 and 2017.

From 1999 to 2017, the crude rate of drug overdose deaths among women aged 30–64 years in the United States increased by 260%. The rates of overdose deaths increased for all drug categories examined, with a notable increase in rates of deaths involving synthetic opioids (1,643%), heroin (915%), and benzodiazepines (830%). These findings are consistent with recent reports highlighting an overall increasing trend in deaths involving drugs, especially with shifts in the type of drugs involved (e.g., heroin) (4).

Other reports have highlighted the overall increase in overdose deaths and emergency department visits related to drug use, especially among women aged 45–64 years (1). In addition to demonstrating the varying drug overdose rate increases by age group, this study determined that the age distribution of decedents shifted from 1999 to 2017, and the average age of women aged 30–64 years dying from drug overdoses increased for every drug class analyzed except synthetic opioids. Prevention programs might need to shift response options as the overdose epidemic experiences demographic shifts. Further, as women progress through life, individual experiences can change in the type of substance used or misused and in the experiences of pain that might result in an opioid prescription (5–8).

The findings in this report are subject to at least three limitations. First, rate estimates of specific drugs involved with deaths might be affected by factors related to death investigation, such as the substances tested for or the circumstances under which tests are performed. For example, toxicology testing cannot distinguish between pharmaceutical fentanyl and illicitly manufactured fentanyl. Second, drug categories presented are not mutually exclusive, and deaths might have involved more than one substance. Increases in deaths involving certain drugs might be the result of increases in certain drug combinations. Finally, the percentage of deaths with specific drugs identified on the death certificate varies over time. Changes in testing and reporting of drugs might have led to observed increases in some drug entities involved in drug overdose deaths.

Substantial work has focused on informing women of childbearing age about the risk and benefit of the use of certain drugs, particularly for the risk posed by neonatal abstinence syndrome as a result of opioid use during pregnancy (9,10). The current analysis demonstrates the remaining need to consider middle-aged women who remain vulnerable to death by drug overdose. A multifaceted approach involving the full spectrum of care services is likely necessary. For example, health care providers who treat women for pain, depression, or anxiety can discuss treatment options that consider the unique biopsychosocial needs of women (2). Providers can consider implementing the CDC Guideline for Prescribing Opioids for Chronic Pain (3), and Medicaid programs can also examine whether prescribing of controlled substances to their clients meets established guidelines. Access to gender-responsive substance use disorder treatment services, especially for pregnant women and women with drug use disorders, can reduce harmful outcomes. Overdose deaths continue to be unacceptably high, and targeted efforts are needed to reduce the number of deaths in this evolving epidemic among middle-aged women.

* Rates in 1999 for certain age groups are not displayed because counts were <20 deaths.