Active Epilepsy and Seizure Control in Adults — United States, 2013 and 2015

Approximately 3 million American adults have active epilepsy (doctor-diagnosed history of epilepsy, currently taking medication or having at least one seizure in the past year, or both). Uncontrolled seizures harm health, impair quality of life, and increase health care costs.

Although 90% of adults with active epilepsy were taking epilepsy medication, less than half (44%) of those taking medications were seizure-free in the past year. Seizures were more common among persons with lower household income, the unemployed, and the divorced, separated, or widowed. 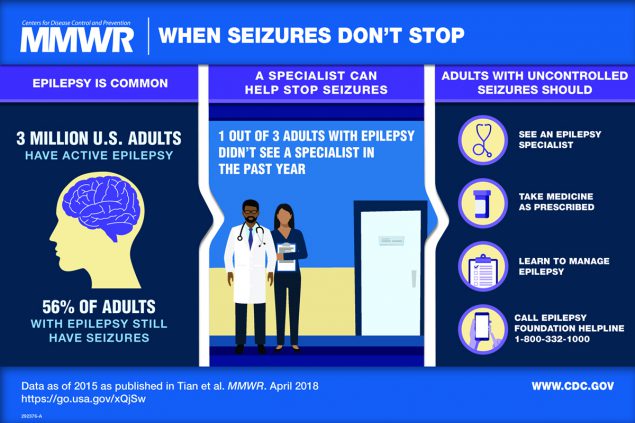 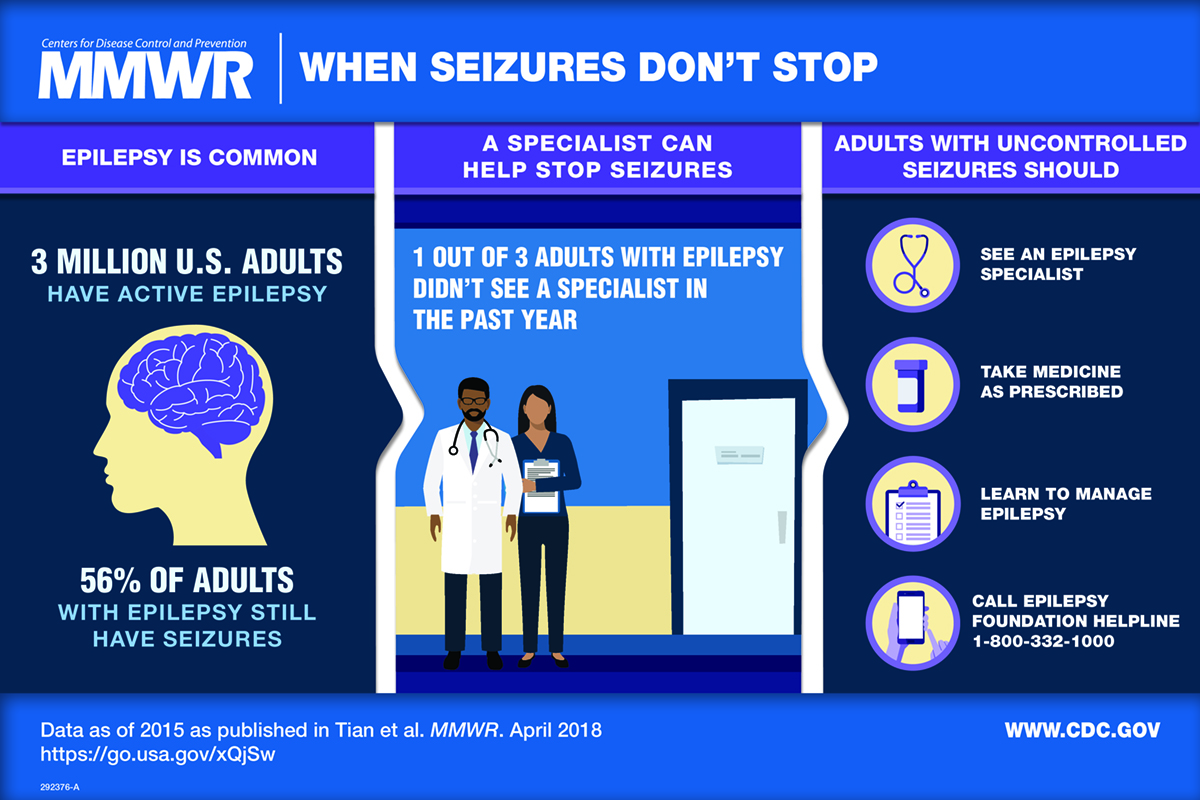 Approximately 3 million American adults reported active epilepsy* in 2015 (1). Active epilepsy, especially when seizures are uncontrolled, poses substantial burdens because of somatic, neurologic, and mental health comorbidity; cognitive and physical dysfunction; side effects of antiseizure medications; higher injury and mortality rates; poorer quality of life; and increased financial cost (2). Thus, prompt diagnosis and seizure control (i.e., seizure-free in the 12 months preceding the survey) confers numerous clinical and social advantages to persons with active epilepsy. To obtain recent and reliable estimates of active epilepsy and seizure control status in the U.S. population, CDC analyzed aggregated data from the 2013 and the 2015 National Health Interview Surveys (NHISs). Overall, an annual estimated 2.6 million (1.1%) U.S. adults self-reported having active epilepsy, 67% of whom had seen a neurologist or an epilepsy specialist in the past year, and 90% of whom reported taking epilepsy medication. Among those taking epilepsy medication, only 44% reported having their seizures controlled. A higher prevalence of active epilepsy and poorer seizure control were associated with low family income, unemployment, and being divorced, separated, or widowed. Use of epilepsy medication was higher among adults who saw an epilepsy specialist in the past year than among those who did not. Health care and public health should ensure that adults with uncontrolled seizures have appropriate care and self-management support in order to promote seizure control, improve health and social outcomes, and reduce health care costs.

NHIS is an annual, nationally representative household survey of the U.S. civilian, noninstitutionalized population.† Epilepsy data were collected in the NHIS Sample Adult component, which includes one randomly selected adult aged ≥18 years from each randomly selected household. In 2013, 34,557 adults (61.2% final response rate) responded to the survey, and in 2015, 33,672 adults (55.2% final response rate) responded.§ Data for 2013 and 2015 were aggregated to provide more reliable estimates (58.2% combined response rate). After excluding respondents with missing information on epilepsy history, 68,174 (99.9%) respondents were included in the analysis.

Adult respondents answered three questions about epilepsy to identify persons with active epilepsy and one question regarding specialty care.¶ These case-ascertainment questions have been validated for use in community surveillance (3). Prevalence of active epilepsy and percentages of respondents with epilepsy who had seen a neurologist or epilepsy specialist in the past year, who were taking epilepsy medication, and whose seizures were controlled (i.e., had no seizures during the past year) among those taking epilepsy medication were estimated for each survey year, both survey years, overall, and by selected sociodemographic characteristics. The percentages of adults taking epilepsy medication and the distribution of seizure frequencies among those with active epilepsy by epilepsy specialty care were also estimated. Prevalences and percentages were age-standardized to the projected 2000 U.S. adult population by four age groups: 18–34, 35–54, 55–64, and ≥65 years. Unless otherwise noted, the relative standard error of all estimates was <30.0%. Statistical software that accounted for the respondent sampling weights and the NHIS complex sample design was used for analysis. All reported differences between subgroups were statistically significant (p<0.05 by two-tailed t-tests).

During 2013 and 2015, the annual prevalence of active epilepsy was 1.1% (approximately 2.6 million adults) and was significantly higher in 2015 (1.2%) than in 2013 (0.9%). The age-adjusted prevalence of active epilepsy was significantly higher among respondents who were non-Hispanic white (white) and non-Hispanic black (black); never married, divorced, separated, or widowed; had less than high school diploma; were unemployed, or living in lower-income families (e.g., families earning <200% of federal poverty level [FPL]) than among other groups (Table).

The number of adults reporting that they have active epilepsy has significantly increased from 2010 (2.3 million) (4) to 2015 (3 million), with about 724,000 more cases identified from 2013 to 2015. In 2010, just over half (52.8%) of adults with active epilepsy saw a neurologist or epilepsy specialist (4). This study found that approximately two thirds (65.7% in 2013 and 68.3% in 2015) of adults with epilepsy saw a specialist. Most (90%) respondents with active epilepsy were taking epilepsy medication. Epilepsy medication use, but not reduced seizure frequency, was more common among those who had seen an epilepsy specialist; however, only 44% of respondents who took epilepsy medication had their seizures controlled in the past year. These results suggest that apart from the improvement associated with prompt diagnosis and treatment, other factors that might affect seizure control need to be addressed. The finding that blacks and respondents with less education and lower income had higher prevalences of active epilepsy is consistent with previous reports (4,5). This study also found that poor seizure control was associated with low income, unemployment, and being divorced, separated, or widowed. Socioeconomic disadvantage among adults with active epilepsy might preclude their accessing health care including specialty care (because of barriers such as cost and transportation) (2), thus affecting seizure control. More importantly, socioeconomic disadvantage (e.g., less education) and social isolation (e.g., lack of social support associated with being divorced, separated, or widowed) (2) might lead to nonadherence to epilepsy medication (6), an important clinical factor that significantly hinders seizure control (6,7).

Among adults taking epilepsy medication, those aged ≥65 years had better seizure control than among younger adults aged 35–54 years. This finding is also consistent with a previous report (8). The apparent better response to epilepsy medication in older adults might be attributable to differences in seizure etiology, drug pharmacokinetics, or better adherence to prescribed antiseizure medication regimens, possibly because of their experience with other chronic conditions or better access to care, including Medicare prescription drug coverage.

Only 44% of respondents with active epilepsy on epilepsy medication in this study were seizure-free in the past year. According to the Institute of Medicine, about 70% of all patients with epilepsy might become seizure-free under appropriate epilepsy treatment (2). To optimize seizure control, clinicians’ decisions to treat epilepsy should be based on individualized assessments of both disease-based (e.g., age of disease onset, seizure etiology, type, and comorbid conditions) and treatment-based factors (e.g., adherence to antiepileptic drugs), as well as patients’ personal characteristics, preferences, and their social context (6,7,9). Improving access to care, providing social support and epilepsy self-management education to improve medication adherence, and encouraging other self-management behaviors such as avoiding seizure triggers (e.g., sleep deprivation, stress, flashing lights, and alcohol or drug use) might also improve seizure control (10).

The findings in this report are subject to at least five limitations. First, estimates of epilepsy prevalence are based on self-reported data and are subject to error; however, because previous studies have validated the NHIS epilepsy questions, this bias is expected to be small (3). Second, active epilepsy might be overestimated because of the mistaken reporting of other nonepileptic seizures (5) or underestimated because of respondents’ reluctance to disclose epilepsy (2), as well as by the exclusion of institutionalized adults (e.g., adults in long-term care facilities and incarcerated persons) from NHIS. Third, these surveys did not objectively measure medication adherence or seizure frequency. Fourth, although respondent survey weights were adjusted to the U.S. population, the potential for nonresponse bias cannot be eliminated, given the low overall response rate (58.2%). Finally, the lack of differences in seizure frequency by seeing a specialist could be confounded by epilepsy severity and other untreated comorbidity such as mood disorder. However, no data regarding epilepsy severity is collected on NHIS

These findings highlight both the substantial burden of uncontrolled seizures in adults with epilepsy and the persistent sociodemographic and socioeconomic disparities in active epilepsy prevalence, access to neurologic specialty care, and seizure control. Health care and public health should ensure that adults with uncontrolled seizures have appropriate care and self-management support in order to promote seizure control, improve health and social outcomes, and reduce health care costs.

* Among those reporting that a doctor or health professional had told them they had a seizure disorder or epilepsy, those who reported taking medication, having had one or more seizures in the past year, or both were considered to have active epilepsy.

FIGURE. Age-standardized prevalence of epilepsy medication use and seizure frequency among adults with active epilepsy, by receipt of specialty care in the past year — National Health Interview Survey, United States, 2013 and 2015

The figure above is a bar chart showing the age-standardized prevalence of epilepsy medication use and seizure frequency among adults with active epilepsy, by receipt of specialty care in the past year, in the United States, in 2013 and 2015.