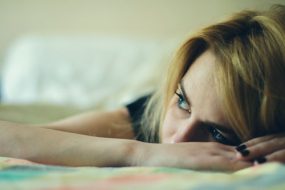 It all happened around my 16th birthday. I started to throw-up, had a sore throat, and was very tired. My pediatrician did a test to check for mononucleosis (also known as mono) but it came back negative. Next I went to an ear, nose, and throat doctor for a second opinion and they did more blood work and eventually diagnosed me with mono.

Before this all started, I was an avid softball player. In fact, I had played since elementary school and was on the All-Star team in little league and pitcher for my high school team. After I got mono, I had to stop for a while.

This was the beginning of my junior year of high school, and initially I planned to miss school for 3 to 4 weeks per the doctor’s orders. Despite still not feeling well, I tried to go back, but it just didn’t work. I experienced severe fatigue, POTS (postural orthostatic tachycardia syndrome)* and I couldn’t concentrate. Pretty soon, I had to drop classes as I could not meet deadlines and there were too many assignments. The assignments were not necessarily difficult, it was just a matter of them piling up due to missing class and not feeling well enough to concentrate on them for hours at a time. Also, I would often have to spend time teaching myself the material before I could even start some of the assignments, so the time commitment was huge. The more the assignments piled up, the longer I would have to concentrate at a given time to catch up on them. It became more and more overwhelming the more days I was out of school.

We got a homebound tutor to help me out. It was tough for me as a teenager because I felt like most of my friends did not understand what I was going through. I often had to cancel going out at the last second, and I felt very bad about that.

After many months had passed with no relief, I was referred to a pediatric infectious disease doctor, but the doctor didn’t seem to be too concerned. Over time I started to do my own research and the next time I went to my pediatrician, I asked about ME/CFS. He was reluctant to give me this diagnosis but eventually did.

My senior year, I started to train for softball again. I had a personal pitching coach helping me and I managed to play a couple of games. However, I had a major “crash” – my body felt so heavy and I just had zero energy. At this point I had to quit softball for good.  I came to realize that I could do what I could do and couldn’t do what I couldn’t do.

Eventually, I travelled out of state to see an ME/CFS specialist. When I found this doctor, I felt like I was finally supported. I also found an adult infectious disease doctor locally who was willing to work with the ME/CFS specialist to come up with the best treatment plan for me. I also learned how to budget my energy, meaning that I need to listen to my body and not over do things. I think having a doctor who believed in me made a huge difference.

The good news for me is that I was able to graduate from high school and attend college. In fact, it was easier to attend college than high school because the college class schedule allowed for more flexibility. I could take breaks between classes and go at my own pace. When you get ME/CFS as a teenager, you don’t have much control over your life. School and other activities are not so flexible. As an adult I could control things more.

I would like people to know that everyone with ME/CFS is different. I cannot stress this enough. Because ME/CFS symptoms vary by person (we do not all have the same ones), what may work for one person, may not work for another person. You need to listen to your body and not feel bad about the limitations. But, you also have to try and have a life.

*POTS, postural orthostatic tachycardia syndrome, is a change in the regulation of heart rate when going from lying down to standing. It causes light-headedness or dizziness and an abnormal increase in heart rate but the heart is normal. It is common for patients with these symptoms of ME/CFS who have been diagnosed with POTS to use this term.