Surveillance of Occupationally Acquired HIV/AIDS in Healthcare Personnel, as of December 2010

Investigation of cases of HIV infection in healthcare personnel without identified risk factors is coordinated by the Centers for Disease Control and Prevention (CDC) and state health department HIV surveillance staff. These investigations have been conducted since early in the AIDS epidemic, but it was not until 1991 that a standardized investigation protocol was developed and implemented by CDC. Since then, healthcare personnel with HIV who are reported without any known risk for HIV infection are to be investigated by state and local health departments using this protocol, as “Cases of Public Health Importance (COPHI)”

Because of the voluntary nature of the reporting system, there is likely underreporting of cases, and the relatively low numbers of documented and possible cases may not reflect the true numbers of cases in the U.S. Documented cases of occupationally acquired HIV are those in which HIV seroconversion is temporally related to an exposure to an HIV-positive source and in which the exposed worker has no reported nonoccupational risk factors for acquisition of HIV. Possible cases of occupationally acquired HIV are those in which a worker is found to be HIV positive, has no known nonoccupational risk factors for HIV, and has opportunities for occupational exposure to blood, body fluids, or HIV-positive laboratory material. Although data was often incomplete and seroconversion after exposure was not documented for these personnel, occupational acquisition of their infection might have been possible.

Of those healthcare personnel for whom case investigations were completed from 1981-2010, 57 had documented seroconversion to HIV following occupational exposures

(see table for occupations).The routes of exposure resulting in infection were: 48 percutaneous (puncture/cut injury); five, mucocutaneous (mucous membrane and/or skin); two, both percutaneous and mucocutaneous; and two were of unknown route. Forty-nine healthcare personnel were exposed to HIV-infected blood; three to concentrated virus in a laboratory; one to visibly bloody fluid; and four to an unspecified fluid. In addition, 143 possible cases of HIV infection have been reported among healthcare personnel.

The most recent possible new case of occupationally acquired HIV reported to CDC occurred in 2009; no new documented cases have been reported since 1999, although several cases are currently in various stages of investigation. The figure shows the number of exposures/injuries leading to documented transmission by year, from 1984-1999. There are usually delays between the exposure and the reporting of the case to CDC. The number of possible cases may decrease if individuals are reclassified when a nonoccupational risk is identified or may increase if new cases are reported.

More than 90% of healthcare personnel infected with HIV have nonoccupational risk factors reported for acquiring their infection.

All cases of suspected occupationally acquired HIV should be reported to state health department HIV surveillance staff and the CDC COPHI Coordinator at 404-639-0934 or 404-639-2050.

This graph is from the article by Do AN et al. Occupationally acquired HIV infection: national case surveillance data during 20 years of the HIV epidemic in the U.S. Infect Control Hosp Epidemiol 2003;24:86-96. 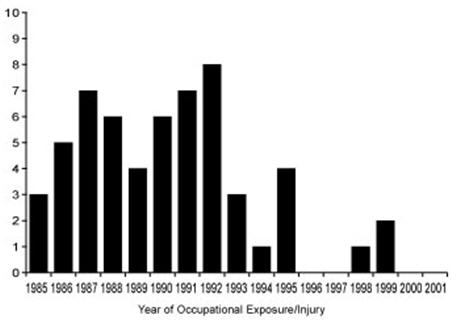