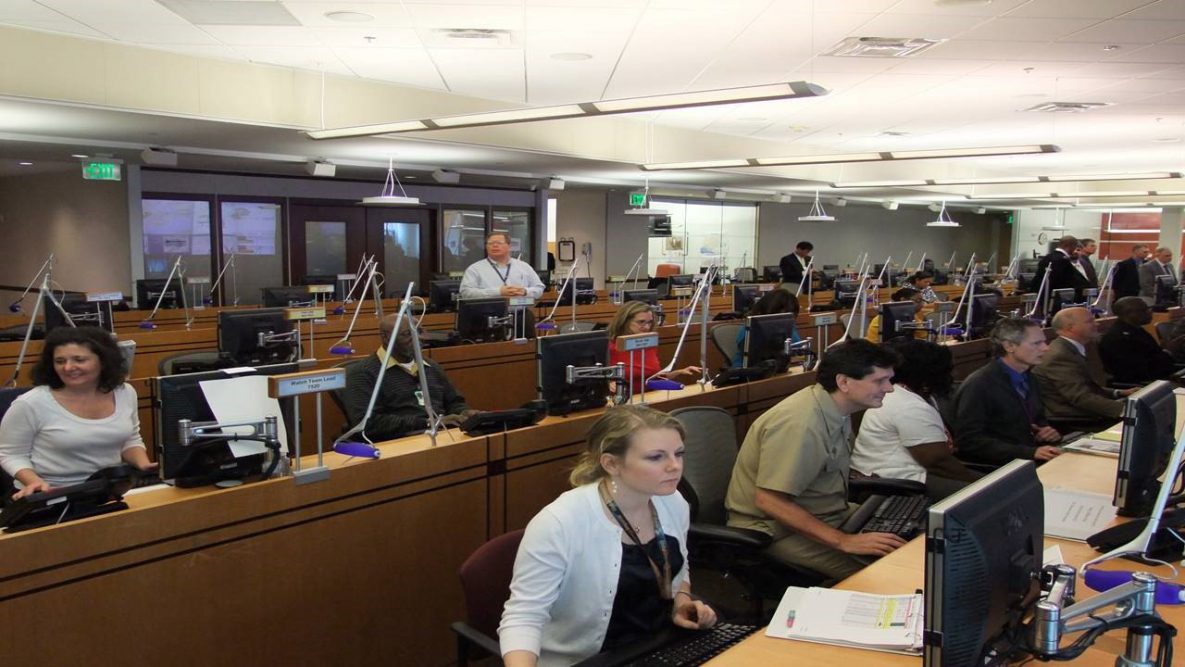 CDC staff work in the Emergency Operations Center 24 hours a day, every day, to monitor and respond to public health crises.

We recognize World Polio Day on October 24, 2017 as an opportunity to commend the accomplishments of the Global Polio Eradication InitiativeExternal (GPEI), along with the unsung heroes of polio eradication who dedicate their lives to end polio and whose work emphasizes the need for continued commitment to achieve global eradication.

Progress against polio has been strong and consistent. Since the launch of the GPEI in 1988, the number of polio cases has decreased by over 99.99% due to the coordinated efforts of the many individuals who have been involved in the polio program and the sustained commitment of partners and donors. Of the many unsung heroes of polio eradication, CDC provides direct support to three major programs: the Stop Transmission of Polio (STOP), the National Stop Transmission of Polio (NSTOP) Program, and the CDC polio lab.

STOPping polio is just the beginning
Since its inception in 1999, STOP has deployed over 2000 participants to 75 countries. STOP consultants are on the frontlines, working to fill gaps in national immunization and surveillance programs. These gaps would substantially undermine the polio eradication effort if left unaddressed. STOP consultants conduct critical polio and other vaccine-preventable diseases (VPD) surveillance activities – often in the most hard-to-reach areas, and among marginalized populations – in an effort to detect poliovirus before it can spread. STOP consultants also support efforts to strengthen immunization through planning, monitoring, and reporting. At the same time, STOP team consultants aid with building national capacity to ensure the work continues long after they are gone. In addition, the STOP Program played a key role in last year’s global withdrawal of poliovirus type 2 containing trivalent oral polio vaccine (tOPV), with the participation of STOP team members around the world ensuring that tOPV was no longer used.

The STOP Program has and will continue to actively participate in and contribute to three major areas of immunization: poliovirus detection and interruption, immunization strengthening, and polio transition planning. Its success is evidenced by the fact that the STOP programmatic approach and lessons learned assisted in the development of other workforce capacity initiatives, including the National Stop Transmission of Polio (NSTOP) and Strengthening Technical Assistance for Routine Immunization Today (START) strategies. Without these unsung heroes, there would be fewer polio fighters in the most hard-to-reach locations, which could result in prolonged timelines to achieve eradication. Without STOP, the thousands of health care workers who have served as STOP team members would not have gained the critical hands-on experience, tools to thrive in challenging environments, leadership skills, knowledge, technical capacity, and other competencies afforded to them by the program. The STOP Program has contributed immensely to the polio eradication effort, and its legacy will continue long after the world is polio free.

With more than 300 personnel at national, state, and local government area levels supporting the program’s projects across the states and local government areas, the National Stop Transmission of Polio (NSTOP) programs train health care professionals, native to and living in their respective countries, in polio eradication and field epidemiology. Modeled after the CDC-World Health Organization (WHO) STOP program, the programs receive financial support from the CDC and other international agencies, while receiving technical assistance from CDC’s Global Immunization Division and Field Epidemiology and Laboratory Training Programs (FELTPs).

NSTOP staff around the world have influenced polio eradication efforts by providing significant contributions not often seen through other initiatives. For example, NSTOP Nigeria’s flagship project was an initiative to vaccinate children younger than 5 years with oral polio vaccine (OPV) in remote nomadic, scattered, and border populations in Northern Nigeria. Meanwhile, Pakistan’s NSTOP often assigns consultants where other partner organizations are not able to place staff safely, such as the North Waziristan Agency, South Waziristan Agency, and Khuzdar Districts of Pakistan. A major contribution of Pakistan’s NSTOP is their role in establishing and running functional District Polio Control Rooms, which are the main polio offices at the district level. Because many NSTOP officers are also FELTP fellows, they go beyond their critical role in polio eradication and support or lead other major outbreak investigations in their geographical area of assignment. Thanks to the many advancements in polio eradication, NSTOP developed a reputation for trained, innovative, and accountable public health professionals who continuously contribute their expertise to the design and implementation of national immunization policies and health information management systems.

The Polio Lab: A Legacy of Its Own
The CDC polio lab started in Atlanta in 1956 with the introductions of the first polio vaccines in the United States. By 1998, the lab had grown to a staff of eight people and a budget of less than $1 million. Today, 60 people work in the CDC polio lab. Although originally created for the purpose of surveillance and detection, the lab expanded its reach by developing the capacity and tools for molecular epidemiology to track the polioviruses globally. Currently the laboratory continues to develop and evaluate new methods for the detection and characterization of polioviruses.

In the last decade, the lab expanded its reach to focus on many aspects of vaccine research, development, and evaluation. The CDC polio lab has provided significant support for vaccine evaluations, clinical trials of new vaccination schedules, and monitoring of population immunity around the world. As we near polio eradication, CDC is increasing its support to the GPLN by continuing to assess and anticipate the needs of the laboratory component of poliovirus surveillance in the post-certification period. This includes the development of new diagnostic methods, strategies for the incorporation of core capacities into broader and sustainable laboratory systems, and developing coordinated laboratory approaches to support other public health priorities.

Going the Last Mile
Unfortunately, poliovirus still circulates in a few hard-to-reach areas, but we remain hopeful that eradication is within our reach. The efforts made to date would not have been possible if not for CDC-affiliated programs like STOP, NSTOP, and the polio lab. Each group has contributed to global capacity to detect, respond, and prevent polio transmission. Through their work, along with the continued commitment of parents, volunteers, governments, partners, and the many others, we will be able to reach every child. This is why they are OUR unsung heroes of polio eradication.