Emergencies can happen anywhere, at any time. To stop public health threats at the source, it is important that countries are prepared to respond quickly to minimize impact on the public.

“Learning from the Ebola virus disease outbreak, my Government is taking action to build a resilient health system that is well positioned to prevent, detect, and respond to any public health threat of either the same or of similar nature to Ebola…An Emergency Operational Centre and a National Public Health Agency for capacity building have been established…to coordinate field activities during outbreaks.”

National public health institutes (NPHIs) are the focal points for public health and can improve management and coordination, much like the CDC does in the United States. Although there are benefits to these efficiencies during routine times, the value of, and need for, NPHIs is particularly evident during public health emergencies, when quick information exchange and decision-making driven by on-the-ground facts can make the difference between life and death.

NPHIs are often closely linked to functions essential to preparedness and response activities, including public health emergency management (PHEM) programs and workforce development programs like the Field Epidemiology Training Program (FETP). When surveillance, emergency management, and a skilled workforce combine, NPHIs create a one-stop shop for functions central to public health emergencies. NPHIs are also natural focal points for inter-ministerial and cross-border collaboration that enables a One Health or multi-country approach to emergencies.

“We started seeing cases in early January, one, two cases, three cases,” NCDC Incident Manager Elsie Ilori said of this seasonal, endemic disease. “By the end of the third week in January, we noticed there was a tremendous increase in cases reported in a week. We went from two cases a week to eight to 10 cases. It was at this point the EOC was activated.” 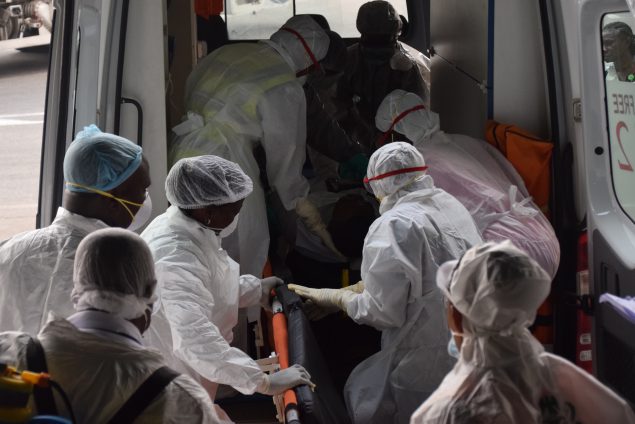 Through a substantial effort to build NCDC’s PHEM function in recent years, NCDC was more prepared than ever. Dr. John Oladejo, Head of NCDC’s Health Emergency Preparedness and Response Department, with support from the International Association of National Public Health InstitutesExternal (IANPHI), participated in CDC’s PHEM Fellowship in 2017. He used the knowledge he gained in this program to bring together the essential elements for an effective response. With a preparedness plan developed in partnership with the Africa Centres for Disease Control and Prevention (Africa CDC), a trained rapid response team, logistical planning, and the “foot soldiers” of FELTP, NCDC was ready for the outbreak.

“The PHEM training … helped to build our incident coordination center… It has helped not only this Lassa fever outbreak, but other outbreaks that are going on,” said Ilori.

From Zika to the Pope’s Visit: Strengthening preparedness in Colombia pays off

When the Zika outbreak hit Colombia in late 2015, the country’s National Institute of Health (Instituto Nacional de Salud, INS) drew upon its legacy of public health service (100 years in 2017) and more recent NPHI strengthening by CDC and the International Association of National Public Health Institutes (IANPHI). An efficient laboratory system, built before the outbreak, was ready to better manage the rapidly increasing specimen numbers – and in a safe manner.

The January 2017 opening of Colombia’s public health emergency operations center (PHEOC) was the culmination of more than three years of CDC and IANPHI support to strengthen the country’s emergency preparedness and response capacities. During the Zika outbreak, this helped INS to better conduct outbreak surveillance and communicate risk to the public. When Pope Francis visited Colombia in September 2017, INS again employed their emergency preparedness and response capabilities by activating the PHEOC to prepare for potential health emergencies among the huge crowds that came to see the pontiff.

A complex, widespread cholera outbreak around the Zambian capital, Lusaka, prompted the Zambia National Public Health Institute (ZNPHI) to activate, for the first time, its Incident Management System and utilize its public health emergency operations center (PHEOC). CDC and IANPHI provided technical support and funding for development of the PHEM functions and outfitting of the PHEOC space.

As the number of cholera cases grew, a multi-sectoral, multi-ministry response taskforce was convened, which ultimately took over responsibilities of coordinating all response activities, led by ZNPHI. The ZNPHI’s leadership was evident at various levels. Its CDC-supported FETP-trained disease detectives supported the response from the field, while other core staff analyzed field and laboratory data, updated epidemic curves, and wrote daily briefs for the minister of health and permanent secretaries, so that the leadership could make evidence-based decisions as the outbreak evolved.

This response underscored the key role the ZNPHI plays in management of public health emergencies. ZNPHI plans to conduct an after-action review (AAR) to discern best practice, identify gaps and areas for improvement, and formulate corrective actions that can inform Zambia’s emergency management strategic plan. ZNPHI can leverage this experience and recommendations from the AAR to further define its role in a multi-sectoral approach to public health emergency management and response.

“The successes realized through CDC’s and IANPHI’s support for development and strengthening of ZNPHI are evident in the way the team actively and positively participated in the response to the cholera outbreak in 2017/18 and other outbreaks,” said ZNPHI Director Dr. Victor Mukonka. “The establishment of the IMS and PHEOC, and use of these systems, provided capacity for a more coordinated response function during the cholera outbreak.”

CDC leverages its experience as a global leader in public health to build capacity for countries to prevent, detect, and respond to public health threats at home. Through collaboration with organizations such as IANPHIExternal, CDC’s NPHI Program supports development and strengthening of NPHIs in countries around the world.

Many countries’ PHEM functions sit within or are connected to an NPHI – or have identified PHEM as one of the pillars of a developing NPHI. CDC and IANPHI support capacity building in preparedness and response in many countries as part of overall NPHI development and strengthening. At CDC, groups involved in PHEM capacity building and NPHI development include the Workforce and Institute Development Branch and Emergency Response and Recovery Branch in the Division of Global Health Protection and the Division of Emergency Operations in the Office of Public Health Preparedness and Response.

“With funding from CDC and IANPHI, we have been able to generate novel evidence and establish laboratory capacity on emerging infectious disease… and INS has been able to strengthen its capacity to investigate, confirm and respond to outbreaks,” said Dr. Eduardo Samo Gudo, Deputy Director General of Mozambique’s National Institute of Health (Instituto Nacional de Saúde, INS).

Taking the next step in regional preparedness

Diseases and other public health threats know no boundaries, so cross-border or regional collaboration is key to preventing or reducing harm. CDC works with organizations like IANPHI, the global network of NPHIs; the World Health Organization (WHO); and the Africa CDC to foster relationships among countries that become critical during emergencies.

In August, CDC is teaming up with IANPHI and ZNPHI to strengthen regional capacity for cross-border PHEM development in southern Africa, building on the organizations’ ongoing relationships to develop and strengthen NPHIs in the region. This workshop, to be held August 20-24 in Lusaka, Zambia, will foster regional partnerships and networks for emergency preparedness and response, as well as strengthen the countries’ and the region’s capacity to meet International Health Regulations (2005). 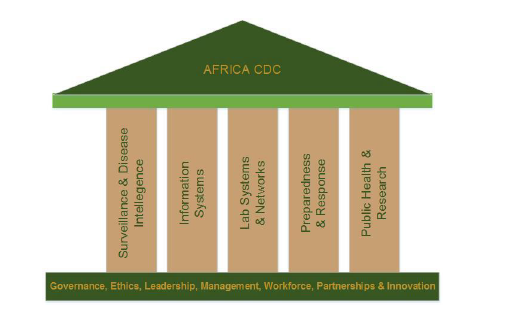 Functional pillars of Africa CDC. (Graphic from the Africa Centres for Disease Control and Prevention Strategy at a Glance (2017-2021).)

Participants will represent each of the 16 countries in the Southern Africa Development Community (SADC) in discussions about cross-border preparedness and response at the regional and sub-regional levels, identification of shared goals and priorities, and initial development of plans for cross-border preparedness and response. The workshop will support one of the pillars of the Africa CDCExternal, whose vision is “a safer, healthier, integrated and prosperous Africa, in which member states can prevent diseases, detect and respond together to crises of public health importance.”

“Functional NPHIs create enabling environments for more effective responses to public health emergencies,” said Dr. John Nkengasong, Director of Africa CDC. “Coordination at the regional level around preparedness and response is a key goal for Africa CDC, and we are enthusiastic about the upcoming regional workshop in Southern Africa.”