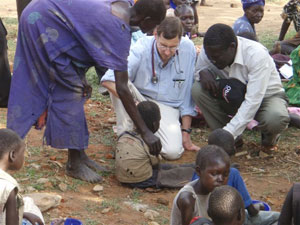 Since the early 1960s, there have been reports of a mysterious disease affecting children in Africa, which causes uncontrolled head nodding (particularly in the presence of food), seizure-like activity, and in many cases, death. This illness is referred to as “Nodding Syndrome” after its most notable symptom. In late 2009, reports from Northern Uganda suggested that over 2,000 children were afflicted with this unusual illness.

In 2010, the GDD Operations Center alerted experts from programs across CDC, including infectious diseases, nutrition and physical activity, and birth defects and developmental disabilities to study the outbreak. Through its outbreak response contingency fund, the GDD Operations Center supported two field deployments of multidisciplinary teams of scientists to the field to investigate. These teams consisted of experts in pediatric infectious disease, pediatric neurology, toxicology, laboratory, and geographic information systems.

The teams documented for the first time that Nodding Syndrome is a novel complex epilepsy syndrome, and that the head nodding was a direct manifestation of seizures that cause a brief lapse in muscle tone due to alterations in brain function. The cases in Northern Uganda are clustered in time and space, with rates of disease many fold higher than expected background rates of complex epilepsy. Children living under the poorest conditions where there is not enough food, pure water, or decent housing seem most susceptible to this condition. CDC is continuing to investigate the disease further to identify the underlying cause in the hope of improving the management and curing the illness through effective treatment.