“Every day (in August 2014) we were going to a funeral for a healthcare worker in Kenema.”
—Laura Miller, Coordinator, Ebola Response Coalition, Sierra Leone 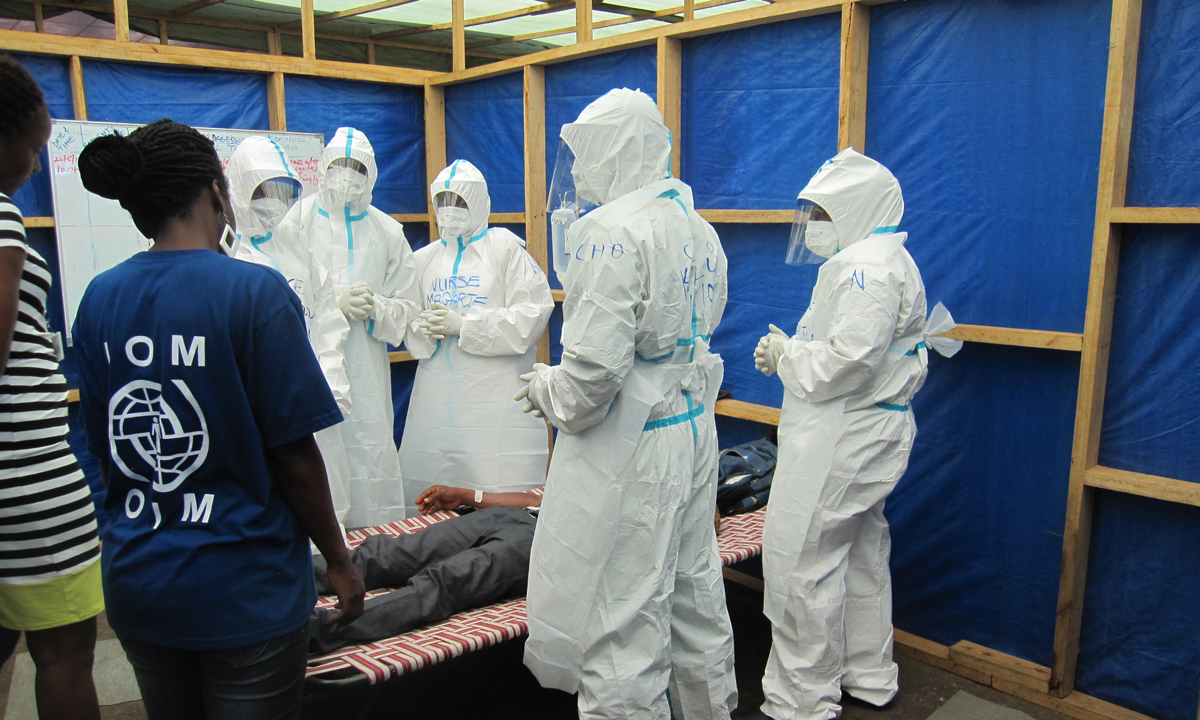 At the height of Sierra Leone’s Ebola outbreak, the walls of Connaught Hospital in Freetown were papered with tributes to dozens of staff members who had been infected with Ebola at the hospital and died. Tragically, they represent only a fraction of the doctors, nurses, ambulance drivers, and hygienists who were infected with Ebola in Sierra Leone. Many healthcare workers were infected in facilities that were not Ebola treatment units (ETUs) but were national hospitals and peripheral health units (PHUs) unprepared for Ebola. In the summer of 2014, more than 50 healthcare workers died while receiving, examining, treating, and moving patients with Ebola symptoms.

At the time, infection prevention and control (IPC) training was focused on staff working in ETUs and holding centers. Sierra Leone’s emergency plans directed families and neighbors of people with Ebola symptoms to call the 117 hotline and request an ambulance to take the patient to medical care where healthcare workers wore personal protective equipment (PPE). Health authorities did not expect patients to also go to non-Ebola facilities.

Unfortunately, people were forced to seek care outside of ETUs. Concerned about stigma or unable to reach an ETU, many people with Ebola symptoms went to local clinics and national hospitals. During check-in, some patients didn’t say that they were at risk for Ebola—that they had participated in the burial of a person who died of Ebola or that a close contact had symptoms, such as diarrhea or fever. Working without PPE or screening protocols, healthcare workers admitted and treated patients without taking precautions to protect themselves.

The first CDC IPC team arrived in August 2014. At that time, the World Health Organization (WHO) and other partners were training frontline workers for ETUs. Few organizations realized the dangers staff faced in non-Ebola health facilities. One of those organizations was the Ebola Response Consortium (ERC). When CDC medical officer Sarah Bennett arrived in August 2014 as CDC’s IPC team lead, ERC proposed IPC training to protect healthcare workers in 1,200 primary healthcare facilities (PHUs). CDC and ERC quickly formed a partnership, along with UNICEF, to achieve the goal. 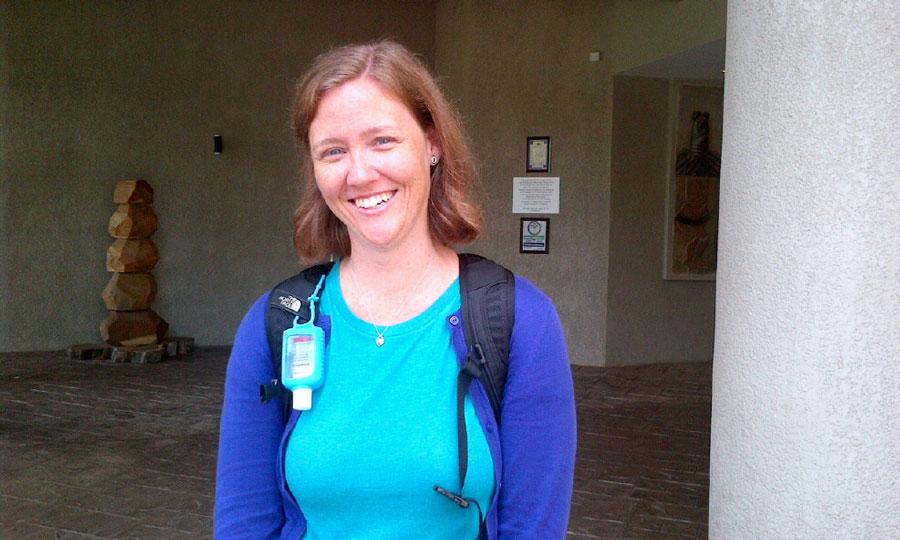 The challenges were daunting. When Ebola cases emerged in Sierra Leone, the country had no IPC guidelines. Some agencies began IPC training and conducting assessments, but according to Dr. Bennett, other requirements were missing. “Personnel, supplies, and infrastructure are key. If these aren’t in place, you can’t do what the training tells staff to do. You can’t fill gaps identified in the assessments. You can’t follow training instructions to wash your hands if you don’t have running water,” Dr. Bennett said. Lack of electricity and running water are common problems for most healthcare facilities in Sierra Leone, which makes following IPC guidance extremely difficult.

Laura Miller, ERC coordinator, said that lack of supplies was as an acute problem for Sierra Leone’s healthcare facilities at the beginning of the response. “They have had severe shortages in the past. In Kenema in June, two weeks after the first case announcement . . . there were no gloves or chlorine in the hospital, and they were treating patients with Ebola,” she said.

CDC’s IPC team worked closely with ERC and other partners over the next several months to fill the gaps. With financial support from CDC Foundation, CDC and ERC trained staff in PHUs in every district. CDC refined and updated IPC guidance packages that ERC and partners developed quickly during the summer of 2014. CDC sent six master trainers and numerous staff members to facilitate PHU trainings. 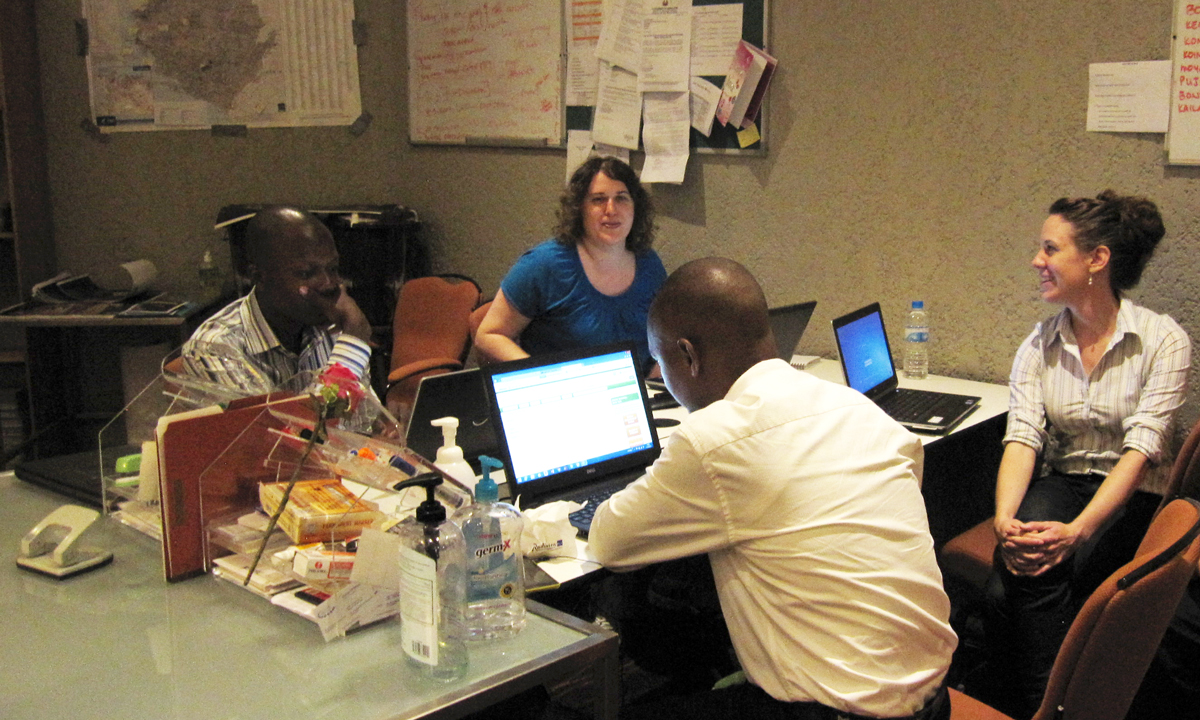 The PHU trainings focused on safely screening and triaging patients with Ebola-related signs and symptoms. It also included safe isolation procedures and discouraged invasive procedures. Within two months, all healthcare workers (4,500 clinical staff and 4,000 non-clinical staff) in almost 1,200 PHUs were trained during the fall of 2014. According to Miller, “This wouldn’t have been possible without Sarah Bennett, her team (CDC IPC Team), and the support she solicited from Atlanta.” According to Miller, the training addressed many fears, “People were afraid to do other jobs, many people were dying.” Financial support from the CDC Foundation for training materials and supplies for the training was also key. 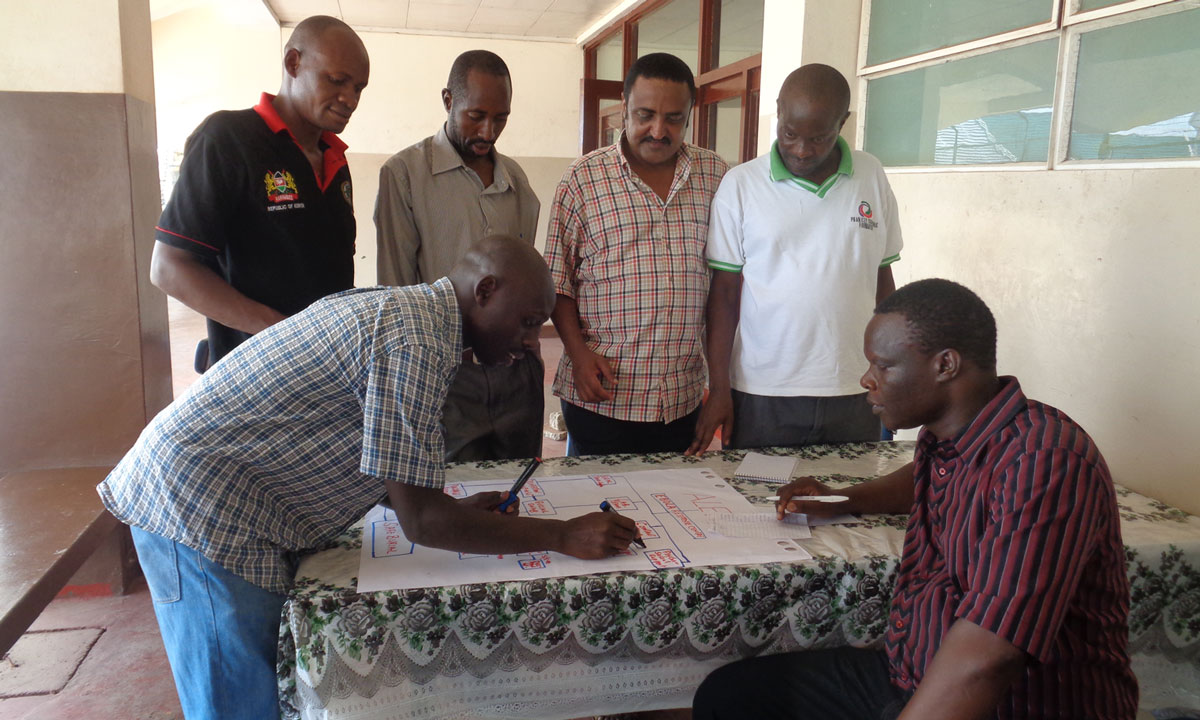 The African Union deployed epidemiologists and other responders to Sierra Leone to combat the Ebola outbreak. Before deploying to the field they participated IPC training conducted by CDC, the International Organization of Migration (IOM), and other partners at the National Ebola Training Academy in Freetown, Sierra Leone.

Over the past year, CDC’s IPC focus has expanded to include training for the African Union teams who have deployed to Sierra Leone, including technicians and epidemiologists. CDC’s epidemiologists and IPC teams developed and integrated epidemiology training into the IPC curriculum delivered at the National Stadium to ensure the African Union staff could work safely in the field. Together, the International Organization for Migration (IOM) and CDC have trained more than 100 Ethiopians who are assisting with the response. At the National Ebola Training Academy, jointly sponsored by the IOM, CDC, WHO, the Sierra Leone Ministry of Health, the College of Medicine and Applied Sciences, the Republic of the Sierra Leone Armed Forces ,and Makerere University, frontline responders learned IPC techniques, and many participate in simulated exercises and protocols for use within ETUs. To learn more about the National Ebola Training Academy, check out this video “Sierra Leone: IOM’s Training Academy in Freetown”.

CDC is currently partnering with the Academy and ERC to create a broad IPC program with the nation’s 25 hospitals. The program includes an assessment, training for all hospital workers, and a mentoring program. CDC has extensively revised the curriculum for hospital IPC. The curriculum now addresses general IPC practice to protect healthcare workers from many infectious diseases, not just Ebola. Twenty-five hospitals are already implementing the training. CDC Foundation funded and arranged for logistics and materials for the IPC trainings for hospitals, a train-the-trainer program for assigned IPC focal points at every hospital, an NGO mentor, and training materials.

Integrating IPC into Sierra Leone’s Healthcare System for the Future

With CDC Foundation funding, eHealth Africa hired two medical students as data clerks for the IPC team. After several months of working with this staff, Dr. Bennett described the students as being “as capable as any CDC field officer at doing assessment.” The students have also participated on Ebola research projects. As they return to medical school, they will thoroughly understand infection control and its importance in preventing many infectious diseases.

When Ebola cases were first discovered in Sierra Leone, the country had no IPC protocols and lacked supplies and trained personnel to implement them. With broader IPC assessments, training, and mentoring in healthcare facilities, Sierra Leone now has a foundation for the future of IPC in hospitals and PHUs. And with medical/nursing students being trained in IPC, the country has a foundation for building IPC capacity. This capacity will help reduce similar threats to healthcare providers that devastated Sierra Leone’s health workforce during the early stage of the Ebola epidemic.