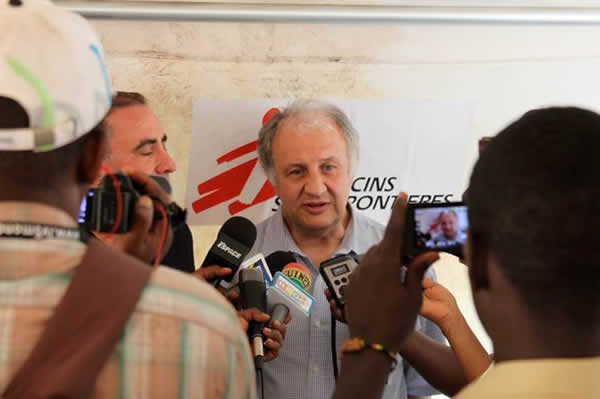 As the crowd at the U.S. Embassy in Conakry, Guinea was gathering in early April, Craig Manning decided to play a hunch, even though—on paper—the meeting could have been mistaken for yet another routine and unremarkable exercise.

Only this time it wasn’t.

This time the featured speaker was CDC’s Dr. Pierre Rollin, a scientist comfortable with presenting complex information to audiences of both experts and lay people. Manning, a health communication specialist with CDC/NCEZID’s Viral Special Pathogens Branch, was ready. He brought a microphone and video camera to capture Rollin’s update about the ongoing Ebola outbreak in Guinea. In his camera bag he had a stash of thumb-drives and in his head, a plan.

It was a perfect convergence—an English- and French-speaking virologist with clear health messages, at a time when public interest was peaking; and Manning’s portable technology for developing and distributing the messages. Soon, Manning had edited Rollin’s presentation at the Embassy into 10 broadcast-ready, 30-second segments. He loaded them onto thumb drives and began distributing them to local radio stations. Simultaneously, the Embassy staff reached out to their local media colleagues, setting up a blitz of radio and television interviews with Rollin and other scientists.

“As (Rollin) was speaking, I thought to myself, ‘wow!’ this is going to work,” Manning recalled.

In retrospect it could very well be this combination that helped inform and calm a public made skittish by its first Ebola outbreak. As deputy chief for NCEZID’s Viral Special Pathogens Branch, Rollin certainly could speak with authority on the scientific, epidemiologic, and clinical aspects of this quickly evolving outbreak.

And it also showed the power of timely, accurate information. It’s a view shared by the World Health Organization (WHO), and it explains why in 2012 the UN organization created its Emergency Communications Network. This is a diverse, multi-national group of emergency communications experts, including some from CDC, who receive special training and can be deployed in humanitarian crises and public health emergencies.

In Guinea, the public’s appetite for knowledge and nervous disposition was understandable. Ebola has a fierce reputation and on March 25 Guinea’s Ministry of Health formally reported an outbreak to WHO. By the time Rollin, Manning and three other experts from CDC arrived on March 31, the number of confirmed or suspected cases had grown to 112. Even more disturbing, 70 people died, meaning a death rate of 62 percent.

In addition to Rollin and Manning, other CDC staff deployed included Ilana Schafer, an Epidemic Intelligence Service (EIS) Officer with the Viral Special Pathogens Branch; Andrea McCollum, an epidemiologist with the Poxvirus and Rabies Branch, and Eric Knudsen, an information technology specialist with CDC/CSELS’ Analytic Tools and Methods Branch. This first team eventually returned to Atlanta, replaced by epidemiologist James Zingesser, and EIS Officers Meredith Dixon, Mateusz Plucinski, and Mary Joung Choi. The CDC team in Liberia consisted of epidemiologists Joel Montgomery, Brett Petersen, Dave Blaney, and EIS Officer Leisha Nolan.  The deployments were supported and coordinated by CDC/CGH’s Global Disease Detection Operations Center, with logistical support from CDC/OPHPR’s Division of Emergency Operations. All CDC responders have returned, and discussions about sending new teams to assist with the ongoing response are under way.

Early in the outbreak cases appeared in Conakry, Guinea’s capital with a population of about 2 million. That was a new and potentially disruptive element for a public health emergency that in the past had largely been limited to rural and remote areas in other countries.

As of May 28, the cumulative number of cases reported by Guinea’s Ministry of Health was 281 with 186 deaths. Additional cases had also been confirmed on the Sierra Leone side of the shared border with Guinea. Local people routinely crossed the borders to travel to market, visit family, or to attend funerals.

The outbreak in West Africa is not over, making it difficult to establish clear cause and effect between early messaging and an effective outbreak response. But Manning is convinced those first efforts to provide clear, actionable information may not only have calmed the public but also made it easier for the technical staff to do its job.

“We had a rare opportunity—the right person with the right message, early on in an outbreak, delivering information that could be understood and acted upon quickly,” Manning said.

The impact could be witnessed at street level. When Rollin was being interviewed by CNN’s Sanjay Gupta on the streets of Conakry in mid-April, bystanders were asked what they knew of the Ebola outbreak “and they accurately described who was at risk,” Manning said. “It seems they learned the new information and applied it.”

“I’m convinced that early messaging can make a significant difference in the public’s perception of risk,” Manning said. “In the case of the Ebola outbreak in Guinea, it was aided considerably by supportive local media outlets, as well as by a proactive U.S. Embassy.”

“But we’re not yet at the end of this outbreak, and things may change,” he quickly added.