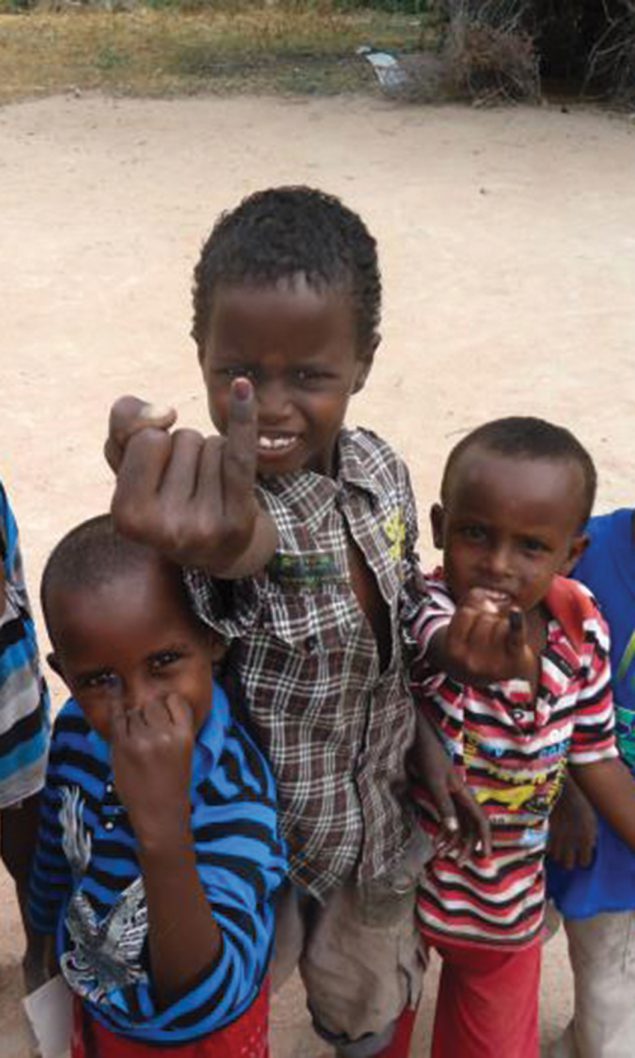 Children in the town of Dadaab located in Garissa County, in eastern
Kenya, showing their marked fingers after being vaccinated
against polio by the STOP team during the in-process monitoring
following the wild type poliovirus outbreak.
Photo Courtesy: CDC foundation/ Adam Hassan Haji

CDC’s Global Immunization Division (GID) continues to play a key role in reducing the number of WPV cases. Substantial progress toward global polio eradication continues, with only 22 cases reported in 2017.

In Afghanistan, GID works closely with in-country contractors and the International Federation of Red Cross and Red Crescent Societies to improve case investigation and campaign monitoring to ensure every child is vaccinated.

In Pakistan, GID is deeply invested in Pakistan’s NSTOP program, which recruited 65 officers to work in all aspects of polio eradication activities, including vaccination campaign microplanning and implementation, acute flaccid paralysis (AFP) surveillance, and case investigations. The work of in- country partners (e.g., WHO, UNICEF), in coordination with GID’s support to the MOH, resulted in steady progress toward eradicating polio, with the number of cases at a record low of only eight WPV cases in 2017 as compared to the previously record of 20 in 2016.

In Nigeria, there were no new cases of WPV reported in 2017. However, polio surveillance and vaccination is not possible in many of the northern Nigerian communities affected by an insurgency. Despite military progress in retaking areas previously held by insurgents, an estimated 30 percent of settlements in Borno State remain inaccessible, and an estimated 130,000–210,000 children under the age of five years are beyond the program’s reach. 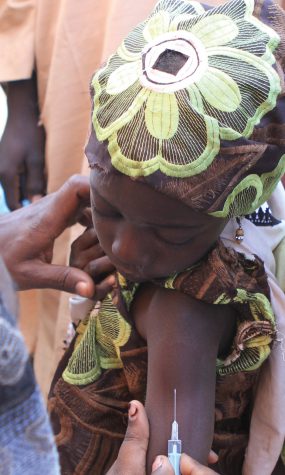 On rare occasions, oral polio vaccine virus will circulate among under-vaccinated populations and develop into a form that can cause outbreaks of paralysis. In 2017, two outbreaks of cVDPV2 occurred in Syria (74) and the Democratic Republic of the Congo (DRC).

In Syria, mass polio vaccination campaigns were used to vaccinate more than 350,000 children in high-risk areas. GID provided technical assistance to the Eastern Mediterranean Regional Office of WHO with planning and implementing response activities, including:

In response to the cVDPV2 outbreak in the DRC, health workers initially vaccinated more than 750,000 children in two of the affected provinces. Subsequently, more than 10 million children were vaccinated as part of an immunization campaign in an expanded response area. GID deployed staff to work with partners and the government to monitor and make recommendations to improve the quality of vaccination campaigns, enhance AFP surveillance, and improve logistics and communication.

GID responded to what is estimated to be the largest global outbreak of meningitis serogroup C in 2017. GID provided technical expertise and support to the government of Nigeria during the outbreak response using the polio eradication infrastructure. GID worked with other international agency partners to plan and implement mass vaccination campaigns in the most affected states, including Sokoto and Zamfara. The vaccination campaign, which targeted 2.1 (84.4%) million persons aged 2–29 years, helped control the outbreak. Additionally, GID worked with field teams to support case detection and surveillance strengthening in all states, regardless of whether states reported cases. GID provided technical assistance in developing communication strategies for addressing the outbreak, including media and communications training for Nigeria government public health staff to help improve vaccination uptake in communities and to adopt behavioral changes that helped control the spread of the outbreak.

GID plays a key role in the Measles and Rubella Initiative (M&RI), a global partnership dedicated to ensuring a world free of measles and rubella. In 2017, GID deployed 30 staff from four CDC Centers (CGH, NCEZID, OPHPR, and NIOSH) on 45 deployments to support 10 countries in preparing for and implementing measles and rubella mass immunization campaigns.

Since 2000, children received an estimated 5.5 billion doses of measles-containing vaccines through routine immunization and mass vaccination campaigns, saving an estimated 20.4 million lives. The number of measles’ deaths dropped from 550,000 in 2000 to 90,000 in 2016. This drop marked the first time in history that the annual number of deaths from measles was less than 100,000.

Rubella is the leading vaccine-preventable cause of birth defects. By December 2016, 152 (78%) of 194 countries introduced rubella-containing vaccines (RCV) into their national immunization programs to prevent these adverse pregnancy outcomes. In 2017, two additional African countries introduced RCV, and India and Indonesia started to conduct vaccination campaigns to introduce RCV. 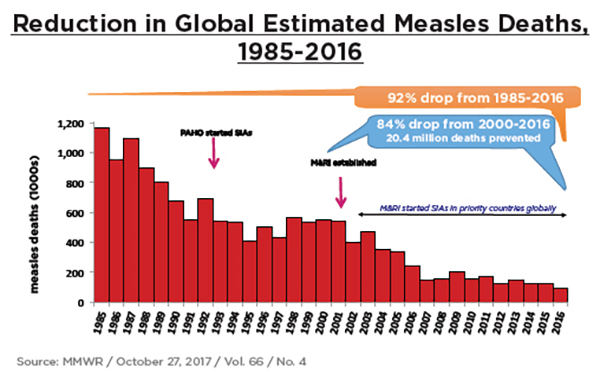 Preventing Hepatitis B through Vaccination

In 2017, GID supported several regions to achieve their hepatitis B control or elimination goals. During 1992-2014, hepatitis B vaccination prevented almost 37 million chronic hepatitis B virus (HBV) infections in the Western Pacific Region (WPR), and 16 million chronic HBV infections in the South East Asia Regions (SEAR), averting a projected 7 million deaths and 2.6 million deaths, respectively. Before the introduction of hepatitis B vaccination, the WPR had one of the highest prevalence rates (>8%) of chronic HBV infection anywhere worldwide. By 2017, WPR achieved the target of decreasing the burden of hepatitis B virus infection among children to less than 1%. In 2017, the South East Asia and Western Pacific Regions launched the integrated triple elimination of HIV, hepatitis B, and syphilis, an important step towards the elimination of hepatitis B by 2030.

Strengthening Immunization Workforce around the World

In 2017, the Stop Transmission of Polio (STOP) program celebrated the 50th training class in Uganda. The STOP program provides training to public health professionals dedicated to volunteering in the fight against polio and continues to provide programmatic support to countries that are at high risk for polio transmission. The STOP participants work to fill gaps in polio immunization campaign management, implementation, and monitoring by working with polio and immunization program staff on field epidemiology, data management, communication outreach, immunization system strengthening, and outbreak response. 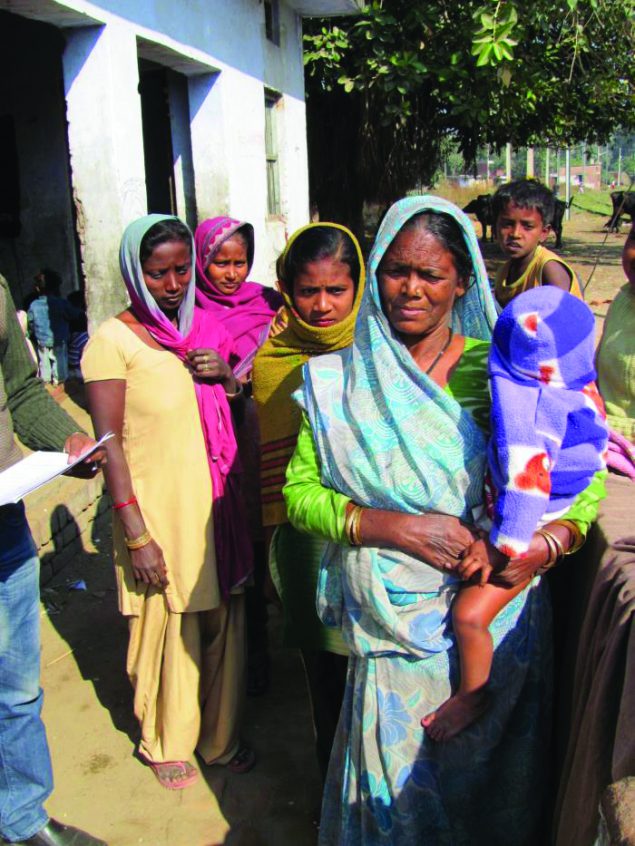 Mothers brought their young children to this vaccination post in order to have them vaccinated against vaccine-preventable diseases including polio, and measles. Photo Courtesy: CDC Foundation/ Alan Janssen 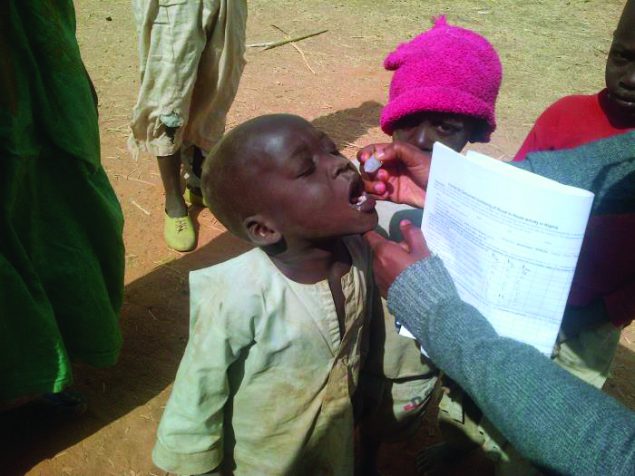 Notable Scientific Publications
What We Do

GID protects the health, safety and security of Americans and people around the world by preventing disease, disability, and death from vaccine-preventable diseases (VPDs). We: