On World Malaria Day 2018External, we find ourselves at a pivotal moment in the global fight against this deadly infectious disease. This year’s theme, “Ready to beat malaria,” presents a charge to unite around the common goal of a world free of malaria.

The evidence is clear, and it shows that the work by CDC and a range of committed global partners in recent years has paid off. Since 2001, an estimated 7 million lives have been saved thanks to the vigorous expansion of proven malaria interventions and the collective efforts of public health and political leaders in countries where malaria remains a serious threat. Work by the U.S. President’s Malaria Initiative External(PMI), Global Fund to Fight AIDS, Tuberculosis and MalariaExternal, and the Roll Back MalariaExternal partnership have made major contributions to the gains we have achieved. 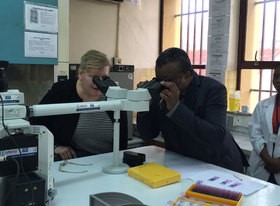 Yet, as we assess the status of malaria control on this World Malaria day, the data in the most recent World Malaria ReportExternal show that progress has stalled. Without urgent action, the major gains we have achieved in the fight against malaria are under threat.

The raw numbers explain why.

An estimated 3.2 billion people (almost half the world’s population) across 91 countries or territories are still at risk of malaria. Malaria killed 445,000 people in 2016, similar to the death toll the year before. Malaria also caused 216 million people to become ill in 2016, an increase of 5 million cases from 2015. Fifteen countries account for 80 percent of global malaria deaths. Except for India, all of these countries are in sub-Saharan Africa. Even today, despite the advances and documented successes, malaria remains a major killer of children under five years, taking the life of a child every two minutes.

In addition, the disease continues to be a threat to U.S. travelers, military, and citizens living abroad, with more than 1,700 imported cases diagnosed each year in the United States.

World Malaria Day 2018 must serve as a rallying cry to attack that status quo, to recognize the way malaria has evolved, and to force us to recommit to finding ways to take the fight to the next level.

Progress to control malaria is threatened by mosquitoes that are resistant to insecticides. Of the 76 malaria-endemic countries that provided data for 2010 to 2016, resistance to at least one insecticide was detected in 61 countries. In 50 countries, resistance to two or more insecticide classes was reported.

Adding to the challenge – and the concern – is that malaria parasites are becoming increasingly resistant to frontline drugs that have historically been effective. To date, resistance to artemisinin—the core compound of the best available antimalarial medicines—has only been detected in five countries of the Greater Mekong subregion, which means we are seeing only the leading edge of potential problems. Monitoring the effectiveness of antimalarial drugs has led to timely treatment policy updates, and is helping to curb the spread of resistance. But even so, the concern is real.

As one of the global leaders in the fight to end malaria, CDC’s world-class scientists are fully committed to apply rigorous science and disease surveillance techniques to end this epidemic. In collaboration with U.S. and global partners, CDC experts are working to end malaria by:

The human and economic costs of malaria—estimated to be at least US$ 12 billion per year—are devastating and real.

This is why CDC experts remain steadfastly committed to using rigorous science and quality disease surveillance approaches to ensure early detection, confirmation, treatment, and prevention of malaria around the world. As we mark World Malaria Day, we ask you to join us in a renewed commitment to end malaria and invite you to help share the message (including using our fact sheets, infographics, and social media cards) that the global health threat of malaria requires our continued vigilance, but it’s also one we can defeat.

We are “Ready to Beat Malaria”… are you?