Despite Earthquake, Lymphatic Filariasis Program in Haiti Is a Success

On Tuesday, January 12, 2010 an earthquake of magnitude 7.0 hit Haiti, devastating many parts of the nation.

An estimated 230,000 people lost their lives, more than 1 million people were displaced, and vital infrastructure was damaged or destroyed. Despite these setbacks, activities to improve the lives of Haitians continued unabated. One such goal was to end lymphatic filariasis (LF) in Haiti. Although the earthquake and subsequent challenges impacted the LF program, key collaborations between CDC and partners continued. Five years after the earthquake, program activities remain robust and the goal of ending LF in Haiti is in sight.

The Plan to Eliminate LF

LF is a mosquito-borne parasitic infection that causes elephantiasis and chronic pain, preventing affected people from living full and productive lives and isolating them from family and community. The Culex mosquitoes that transmit LF are adapted to breed in conditions where the environment has been degraded, a description that applies to many areas where many Haitians live.

In 2000, the World Health Organization (WHO) called for the global elimination of LF by 2020. In 2010, WHO estimated that 120 million people were infected with LF globally. As one of four countries in the Americas where LF is still endemic, Haiti accounted for almost 80% of the 12.4 million people at risk in this region.

The National Program to Eliminate LF (NPELF) began in Haiti in 2000, based on a strategy of annual mass drug administration (MDA) with 65% coverage of the total population. MDA for LF is primarily achieved by  treating everyone in endemic communities once per year for 5 to 8 years with a combination of the drugs diethylcarbamazine (DEC) and albendazole. Although the elephantiasis and chronic pain from LF cannot be cured by MDA in people who already have the disease, new infections can be prevented by these repeated cycles of MDA. The NPELF is a partnership between the Haitian Ministry of Health (Ministere de la Sante Publique et de la Population, or MSPP); University of Notre Dame (funded by the Bill & Melinda Gates Foundation); IMA World Health (funded by RTI/USAID); and CDC. GlaxoSmithKline supports the global campaign by providing free albendazole.

Despite considerable challenges, including funding limitations, political crises, hurricanes, and finally the earthquake of 2010, the MDA program continued.

By the end of 2009, 4.5 million people had been treated with MDA. At a meeting of partners that coincidentally was scheduled on the day the earthquake occurred in January 2010, NPELF members developed plans to cover all of Haiti, with the exception of Port-au-Prince, for which funds were lacking. After the earthquake, CDC and other partners closed that treatment gap beginning in late 2011, providing three rounds of annual treatment for Port-au-Prince residents using earthquake funds. With this new funding, Haiti and partners were finally able to achieve full MDA coverage of the entire country. 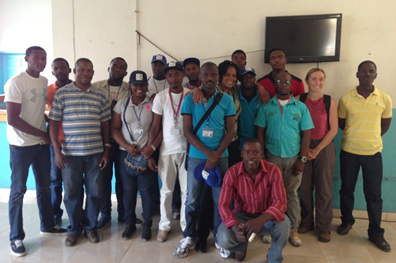 CDC’s Dr. Alaine Knipes and Dr. Carl Fayette of IMA World Health (in yellow) with survey teams, preparing to head into the field for the coverage survey in Port-au-Prince.

On the Ground: Alaine K. Knipes

The LF elimination team, a dedicated group of public health professionals, provides MDA and technical assistance for monitoring and evaluation. Alaine Knipes is one of CDC’s LF elimination team members. Dr. Knipes visited Haiti several times between August and November 2014. During these visits, she worked alongside NPELF partners to train surveyors, laboratory technicians, and program managers. She also helped to design, plan, and supervise field implementation of surveys to assess how much of the population had received MDA and the program’s impact on transmission. Dr. Knipes also trained surveyors in mobile data collection using smart phones, enabling real-time data management and program monitoring. Most recently, she worked with partners to develop new protocols that integrate measurements for LF transmission with those for soil-transmitted helminthes as well as malaria. This new integrated protocol will be field tested for the first time in January 2015.

With less than a year on the ground in Haiti, Dr. Knipes realized that helping to eliminate LF is a team effort and requires having “just the right touch” when working with partners in the area.

Based upon an MDA coverage survey, 71% of the metropolitan population – 8.1 million people – underwent MDA by February 2012. With Port-au-Prince achieving and maintaining adequate population coverage, all the current 140 communes of Haiti have now received at least three years of MDA, marking the largest step toward the elimination of LF in Haiti. 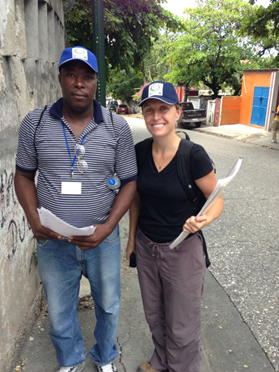 When the elimination program began, nearly half of people in the most affected areas were infected; today, fewer than 3 in 100 people test positive for infection, proving that despite a host of challenges, the LF program stands as an exceptional public health success in Haiti. “There is a better understanding of the benefits of MDA,” said CDC’s Dr. Patrick Lammie, who has devoted most of his career in public health to eliminating LF in Haiti and elsewhere.

According to Dr. Lammie, this success shows that Haiti is on track to end all MDA by 2017. “It’s an achievable goal,” he says, “if we continue to give partners the capacity needed to continue to fight the disease, and continue our (CDC’s) role as a committed partner.”

While the fight against LF in Haiti is not over, victory over this terrible disease is within sight. Through the hard work and dedication of public health officials in Haiti, LF can soon be a threat of the past, ensuring that future generations can live without the fear of developing LF, allowing the country to focus on other public health concerns.