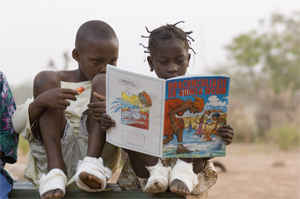 While at the containment center in Ghana two children look at a picture book about Guinea worm disease. Credit: The Carter Center/Louise Gubb, 2007

The global campaign to eradicate Guinea worm disease (GWD) began in 1980 at the U.S. Centers for Disease Control and Prevention (CDC). CDC suggested that the eradication of GWD (also known as dracunculiasis) would be an ideal indicator to measure the success of the United Nations’ International Drinking Water Supply and Sanitation Decade (1981–1990) because it was believed that people could only get GWD by drinking contaminated water. In 1984, the World Health Organization Collaborating Center for Research, Training, and Eradication of Dracunculiasis was established at CDC. This name would later change in 2017 to the World Health Organization Collaborating Center for Dracunculiasis Eradication (WHOCC). In 1986, the World Health Assembly (WHA) adopted a formal resolution calling for the elimination of GWD country by country and the Guinea Worm Eradication Program (GWEP) was born. The Carter Centerexternal icon (TCC) became the lead organization in this global effort. They direct a coalition of partners that includes Ministries of Health of endemic countries, the World Health Organization (WHOexternal icon), UNICEFexternal icon, and CDC along with thousands of village volunteers and supervisory health staff. Based on the success of the GWEP, the WHA adopted its first resolution to eradicate GWD from the world in 1991. The GWEP continues to receive support from numerous donor agencies, foundations, institutions, and governments. 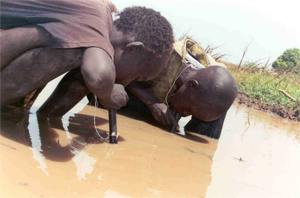 The WHOCC at CDC currently focuses on the following activities: