What People Who Raise Pigs Need To Know About Influenza (Flu) 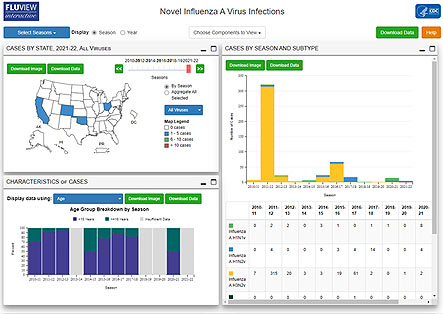 CDC data on the most current case counts for variant flu virus infections in humans reported in the United States.

As someone who raises pigs, whether for show (e.g., 4-H or Future Farmers of America [FFA]) or as part of a farming operation (i.e., commercial pork producer or swine farmer), you may have questions about flu in both pigs and people. This document addresses what is known about flu viruses in pigs and people and what people in contact with pigs can do to reduce the risk of getting sick or of getting their pigs sick.

Flu in Pigs and People

Flu viruses that commonly infect pigs and pig herds can result in high rates of illness among pigs, but few deaths.

Signs of flu in pigs include:

Questions & Answers about Flu in Pigs

Q. How does flu spread among pigs?

Q. Can flu virus infections be prevented in pigs?

A. It is be possible to lessen the risk of infections in pigs and/or severity of disease by following these management strategies:

Q. What about flu vaccines for pigs?

A. Flu vaccines for pigs can help reduce the risk of pigs getting flu but may not be 100% effective. Sometimes, flu vaccines used in pigs may not protect against the virus or viruses that are spreading in pigs, because the vaccine virus must match the flu virus that is circulating in the pigs. More information is available at influenza-vaccine-selection-for-pigs-producer-brochure (iastate.edu).

Q. How can veterinarians help?

A. You should work together with your veterinarian to develop herd management and vaccination strategies to reduce the spread of flu among swine herds and to prevent the introduction and spread of flu viruses between pigs, people, and birds.

Q. Can people get flu virus from a pig from eating pork?

A. Flu viruses in pigs have not been shown to be transmissible to people through eating properly handled and prepared pork (pig meat) or other products derived from pigs. For more information about the proper handling and preparation of pork, visit the USDA website fact sheet Fresh Pork from Farm to Table.

A. The 2009 H1N1 flu virus was first detected in people in the United States in April 2009. The virus was new to people and was able to spread easily from person-to-person, causing the first flu pandemic in more than 40 years. This virus had two genes from flu viruses that normally spread in pigs in Europe and Asia, three genes from flu viruses that normally spread in North American pigs, as well as genes from human and bird flu viruses. This particular virus had not been detected in North American pigs before April 2009. The 2009 H1N1 flu virus is now considered a human seasonal flu virus.

In October 2009, the first 2009 H1N1 flu virus infection in a pig in the United States was confirmed. Pigs in other countries also have been infected with the 2009 H1N1 flu virus, including Canada, Australia and Argentina. USDA and other researchers conducted studies in pigs that showed that the 2009 H1N1 virus caused illness in swine similar to those of other well-known, circulating swine flu viruses.

Q. How common are variant flu infections in people?

A. There have been sporadic variant flu virus infections and small variant outbreaks, particularly among people exposed to pigs in the fair setting, in the past.

Preventing the Spread of Flu Between People and Pigs

Other routine measures to take:

If you or your family members become sick with flu-like symptoms and need medical treatment, take the following actions:

Almost all flu cases in people are caused by human flu viruses, not viruses from pigs. However, if you are infected with a flu virus of animal origin, the health department will want to talk with you about your illness and make sure that other people you live and work with are not sick with the same virus. If you do get sick with variant flu, there are prescription antiviral medications that can treat your illness. Illnesses associated with variant flu virus infection have been mostly mild with symptoms similar to those of human seasonal flu. However, serious illness can result, especially in people who are at higher risk of developing serious flu complications, so it is important to contact your doctor right away and tell them if you’ve had recent exposure to pigs or pig settings and develop flu symptoms.