Swine influenza (swine flu) is a respiratory disease of pigs caused by type A influenza viruses that regularly cause outbreaks of influenza in pigs. Swine flu viruses can cause high levels of illness in swine herds, but usually cause few deaths. Common signs in sick pigs include fever, depression, coughing (barking), discharge from the nose or eyes, sneezing, breathing difficulties, eye redness or inflammation, and going off feed. However, influenza-infected pigs also may not appear ill or be only mildly ill. Swine influenza viruses may circulate among swine throughout the year, but most outbreaks occur during the late fall and winter months similar to outbreaks of seasonal influenza in humans.

What is a variant influenza virus?

When an influenza virus that normally circulates in swine (but not people) is detected in a person, it is called a “variant influenza virus.” For example, if a swine origin influenza A H3N2 virus is detected in a person, that virus will be called an “H3N2 variant” virus or “H3N2v” virus. This naming convention was first announced in a January 6, 2012 Morbidity and Mortality Weekly Report entitled Update: Influenza A (H3N2)v Transmission and Guidelines — Five States, 2011. (Reference)

Flu Can Spread Between Pigs and People 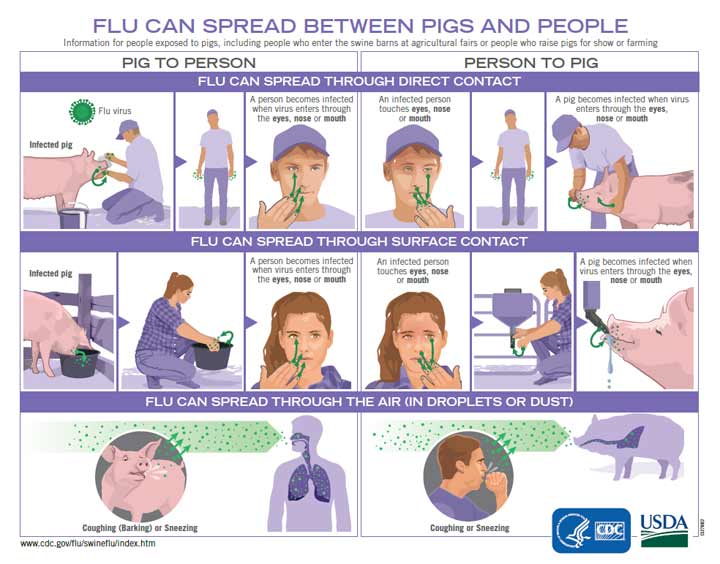 Can humans be infected with swine influenza viruses?

Yes. Swine flu viruses do not normally infect humans, however, sporadic human infections with influenza viruses that normally infect swine have occurred. When this happens, these viruses are called “variant viruses.” Most commonly, human infections with variant viruses have occurred in people exposed to infected pigs (e.g., children near pigs at a fair or workers in the swine industry). In addition, there have been documented cases of multiple persons becoming sick after exposure to one or more sick pigs. Also, cases of limited person-to-person spread of variant viruses have occurred.

How common is it for humans to be infected with influenza viruses that normally infect swine?

In the past, CDC received reports of approximately one human infected with influenza viruses that usually are found in swine every one to two years, but beginning in 2012, there was a jump in the number of these cases. (See Case Count: Detected U.S. Human Infections with Variant Influenza Viruses by State since December 2005.) The increased detection and reporting of these cases could be occurring for a number of reasons, including one or more of the following factors: first, pandemic preparedness efforts have improved state level surveillance and laboratory capacity to detect novel viruses in the United States; second, in 2005, novel influenza virus infections were made internationally reportable; and in 2007 they were made domestically reportable. And third, it’s also possible that there is a true increase in the number of these cases, possibly occurring from exposure to infected swine or through subsequent, limited human-to-human transmission.

Why are human infections with variant viruses of concern?

What symptoms do people have when they are infected with variant viruses?

People who have been infected with variant viruses have had symptoms similar to the symptoms of regular human seasonal influenza. These include fever, lethargy, lack of appetite and coughing. Some people also have reported runny nose, sore throat, eye irritation, nausea, vomiting and diarrhea.

Swine influenza has not been shown to be transmissible to people through eating properly handled and prepared pork (pig meat) or other products derived from pigs. For more information about the proper handling and preparation of pork, visit the USDA website fact sheet Fresh Pork from Farm to Tableexternal icon.

How are variant influenza viruses spread?

Influenza viruses can be directly transmitted from pigs to people and from people to pigs. These infections have  most commonly been reported after close proximity to infected pigs, such as in pig barns and livestock exhibits housing pigs at fairs. Infected pig cough or sneeze and droplets with influenza virus in them can spread through the air. If these droplets land in your nose or mouth, or are inhaled, you can be infected. There also is some evidence that you might get infected by touching a surface with virus on it and then touching your mouth or nose. A third way to possibly get infected is to inhale droplets or dust containing influenza virus. Scientists aren’t really sure which of these ways of spread is the most common.

Human-to-human transmission of variant flu viruses also has occurred, though this method of spread has been limited. This kind of transmission is thought to occur in the same way that seasonal flu transmits in people, which is mainly through coughing or sneezing by people who are infected. People also may become infected by touching something with flu viruses on it and then touching their mouth or nose. It’s important to note that in most cases, variant flu viruses have not shown the ability to spread easily and sustainably from person to person.

How can human infections with variant influenza viruses be diagnosed?

To diagnose variant influenza A virus infection, a respiratory specimen would generally need to be collected within the first 4 to 5 days of illness (when an infected person is most likely to be shedding virus). However, some people, especially children, may shed virus longer. Since the 2009 H1N1 pandemic, state health departments have the ability to test for novel (non-human) influenza viruses. However, if a variant influenza virus is suspected, it is sent to CDC for further testing.

What medications are available to treat variant flu infections in humans?

There are four different antiviral drugs that are recommended for use in the United States for the treatment of influenza: oseltamivir, peramivir, zanamivir, and baloxavir.

For more information on human infections, visit Past Reports of Human Infections with Variant Viruses.