Highlights from the 2015 Surveillance Report 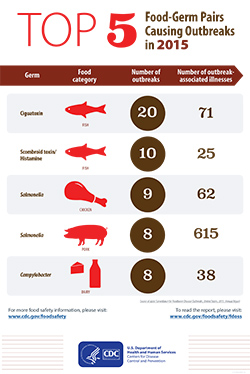 When two or more people become ill from consuming the same contaminated food or drink, the event is called a foodborne disease outbreak. Outbreaks provide important insights into how germs are spread, which food and germ combinations make people sick, and how to prevent food poisoning. Each year, CDC summarizes foodborne disease outbreak data in an annual surveillance report and makes it available to the public through the NORS Dashboard.

A single, confirmed agent or germ caused 443 outbreaks. The most commonly reported were:

A single, confirmed germ caused 10,008 outbreak-related illnesses and 896 hospitalizations (about 1 of every 11 illnesses). The most common causes:

The agents that caused the most outbreak-related hospitalizations were:

The agents that caused outbreak-related deaths were:

For 40% of the outbreaks in 2015 (360 outbreaks), investigators were able to identify the food that made people ill. The food could be placed into a single category, out of 24 possible categories, in 194 of those outbreaks, or slightly more than half of them. The most commonly implicated food categories were:

Outbreaks in which the food could be classified into a category included 4,364 illnesses. Outbreak-associated illnesses were most commonly from:

Combinations of Foods and Germs that Caused Illness, Hospitalizations, and Deaths

Knowing which food and germ combinations make people sick is critically important to preventing future foodborne outbreaks. The confirmed germ-food pairs responsible for the most outbreak were:

The confirmed germ-food pairs responsible for the most outbreaks were:

Among the 779 outbreaks and 12,054 illnesses with a reported single location where food was prepared, 469 outbreaks (60%) and 4,757 associated illnesses (39%) were attributed to foods prepared in a restaurant.

Among these outbreaks, sit-down dining restaurants were the type most commonly reported as the location where food was prepared (373 outbreaks, 48% of the outbreaks).

Foods implicated or suspected in multistate outbreaks of Salmonella:

Food implicated in a multistate outbreak of Cyclospora cayetanensis:

Foods implicated in a multistate outbreak of Listeria:

Foods implicated in a multistate outbreak of Vibrio parahaemolyticus:

Why is this report important?

Foodborne diseases due to known pathogens are estimated to cause about 9.4 million illnesses each year in the United States. Even though only a small proportion of these illnesses occur as part of a recognized outbreak, the data collected during outbreak investigations provide insights into the pathogens and foods that cause illness. Public health officials, regulatory agencies, and the food industry can use these data to create control strategies along the farm-to-table continuum that target specific pathogens and foods.

What else do I need to know about this year’s report?

The findings in this report have at least three limitations. First, only a small proportion of foodborne illnesses that occur each year are identified as being associated with outbreaks. The extent to which the distribution of food vehicles and locations of preparation implicated in outbreaks reflect the same vehicles and locations as foodborne illnesses not associated with outbreaks is unknown. Similarly, not all outbreaks are identified, investigated, or reported. Second, many outbreaks had an unknown etiology (cause), an unknown food vehicle, or both, and may not be well represented by those outbreaks in which a food vehicle or etiology could be identified. Finally, CDC’s outbreak surveillance system is dynamic. Agencies can submit new reports and change or delete reports as information becomes available. Therefore, the results of this analysis might differ from those in other reports.

How can I learn how many reported outbreaks were associated with a certain food, germ, or setting? 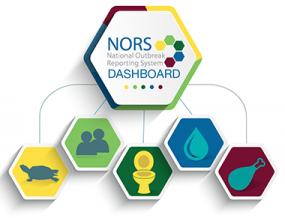 NORS Dashboard is CDC’s interactive online program for searching and accessing data from the National Outbreak Reporting System (NORS), which includes the Foodborne Disease Outbreak Surveillance System. NORS Dashboard lets search foodborne disease data by year, state, food and ingredient, location where food was prepared, and cause. It provides information on numbers of illnesses, hospitalizations, deaths, the germ, and the confirmed or suspected cause.

For guidance on using the data and limitations to keep in mind when searching by food or ingredient, take a look at frequently asked questions about NORS Dashboard.

How can I find out about foodborne disease outbreak trends?

Why is the cause of so many reported outbreaks unknown?

Even if the cause is not identified, CDC encourages states to report all foodborne disease outbreak investigations.

Why is the food unknown for so many reported outbreaks?

Even the most thorough investigations can fail to identify the contaminated food under certain circumstances, such as when most of the people who became sick ate many of the same foods (making it hard to identify the one that caused them to become ill), the number of people ill is very small, or the outbreak is identified after people’s memories of what they ate before getting sick have faded. CDC encourages health departments to report all foodborne outbreak investigations. Even if the contaminated food is not determined, we can learn useful information that can help shape prevention efforts. 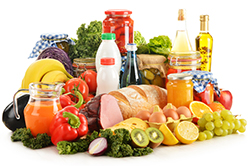