Data that will inform antibody testing (also referred to as serologic testing) guidance are rapidly evolving. Recommendations on the use of serologic tests to determine protective immunity and infectiousness among persons recently infected with SARS-CoV-2 will be updated as new information becomes available.

Serologic methods have important public health and clinical uses for monitoring and responding to the COVID-19 pandemic.

Serologic assays for SARS-CoV-2, now broadly available, can play an important role in understanding the virus’s epidemiology in the general population and identifying groups at higher risk for infection. Unlike direct detection methods such as viral nucleic acid amplification or antigen detection tests that can detect acutely infected persons, antibody tests help determine whether the individual being tested was previously infected—even if that person never showed symptoms. Serologic tests detect resolving or past SARS-CoV-2 virus infection indirectly by measuring the person’s humoral immune response to the virus. Therefore, serologic assays do not typically replace direct detection methods as the primary tool for diagnosing an active SARS-CoV-2 infection, but they do have several important applications in monitoring and responding to the COVID-19 pandemic.

Although serologic tests should not be used at this time to determine if an individual is immune, these tests can help determine the proportion of a population previously infected with SARS-CoV-2 and provide information about populations that may be immune and potentially protected. Thus, demographic and geographic patterns of serologic test results can help determine which communities may have experienced a higher infection rate and therefore may have a higher proportion of the population with some degree of immunity, at least temporarily. In some instances, serologic test results may assist with identifying persons potentially infected with SARS-CoV-2 and determining who may qualify to donate blood that can be used to manufacture convalescent plasmaexternal icon as a possible treatment for those who are seriously ill from COVID-19.

Development of Antibodies and Immunity

Nearly all immune-competent individuals will develop an immune response following SARS-CoV-2 infection. Like infections with other pathogens, SARS-CoV-2 infection elicits development of IgM and IgG antibodies, which are the most useful for assessing antibody response because little is known about IgA response in the blood.

Recurrence of COVID-19 illness appears to be very uncommon, suggesting that the presence of antibodies could indicate at least short-term immunity to infection with SARS-CoV-2. Consistent with this observation, experimental primary infection in primates and subsequent development of antibodies resulted in protection from reinfection after the primates were rechallenged. Additionally, antibody development in humans correlates with a marked decrease in viral load in the respiratory tract. Taken together, these observations suggest that the presence of antibodies may decrease a person’s infectiousness and offer some level of protection from reinfection. However, it remains uncertain to what degree and for how long individuals with antibodies (neutralizing or total) are protected against reinfection with SARS-CoV-2 or what concentration of antibodies may be needed to provide such protection.

Current Status of Antibody Testing in the United States

The two major antigenic targets of SARS-CoV-2 virus against which antibodies are detected are spike glycoprotein (S) and nucleocapsid phosphoprotein (N). While S protein is essential for virus entry and is present on the viral surface, N protein is the most abundantly expressed immunodominant protein that interacts with RNA. Multiple forms of S protein—full-length (S1+S2) or partial (S1 domain or receptor binding domain [RBD])—are used as antigens. The protein target determines cross-reactivity and specificity because N is more conserved across coronaviruses than S, and within S, RBD is more conserved than S1 or full-length S.

Different types of assays can be used to determine different aspects of immune response and functionality of antibodies. The tests can be broadly classified to detect either binding or neutralizing antibodies. 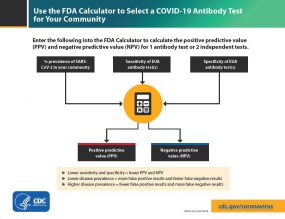 Use the FDA Calculatorpdf icon to select a COVID-19 Antibody Test for your community.

FDA now requires commercially marketed serologic tests to receive Emergency Use Authorization (EUA)external icon. Tests that are not commercially marketed do not require FDA authorization, but developers may voluntarily request authorization. Multiple agencies—including FDA, the National Cancer Institute/National Institutes of Health (NCI/NIH), CDC, and the Biomedical Advanced Research and Development Authority (BARDA)—are collaborating with members of academia and the medical community to evaluate several serology tests using a well-characterized set of clinical samples (serum or plasma) collected before and during the current COVID-19 outbreak. A list of all tests authorized for emergency use under EUA is maintained on an FDA websiteexternal icon. All currently authorized tests are qualitative (providing a result that is positive, negative, or indeterminate) rather than quantitative (providing a quantitative assessment of antibody levels).

Both laboratory and rapid serologic assays have received EUA. Serologic testing technologies include single-use, low-throughput lateral flow tests where the presence of antibody is demonstrated by a color change on a paper strip and laboratory-based immunoassays that allow for processing of many samples at the same time.

The EUA letter of authorization includes the settings in which the test is authorized, based on FDA’s determination of appropriate settings for use during the public health emergency.

In most of the country, including areas that have been heavily impacted by COVID-19, the prevalence of SARS-CoV-2 antibody is expected to be low, ranging from <5% to 25%, so that testing at this point might result in relatively more false-positive results and fewer false-negative results.

In some settings, such as COVID-19 outbreaks in food processing plants and congregate living facilities, the prevalence of infection in the population may be significantly higher. In such settings, serologic testing at appropriate intervals following outbreaks might result in relatively fewer false-positive results and more false-negative results.

Three strategies can be used to improve positive predictive value:

Several testsexternal icon are available with specificities of 99.5% or greater. Because specificity may vary according to the panel of specimens collected, FDA, NIH, and CDC have conducted an independent evaluationexternal icon of some tests using a standard panel of specimens. Specificities of at least 99.5% are required to achieve a high positive predictive value in low-prevalence populations (Table 1). Tests with lower specificity, for example a specificity of 95%, will result in suboptimal positive predictive values when used in low-prevalence populations. In this situation, orthogonal testing algorithms can be designed to maximize overall specificity while retaining maximum sensitivity.

The performance of orthogonal testing algorithms has not been systematically evaluated but can be estimated using an online calculatorexternal icon from FDA. See Table 2 for the potential improvement benefits of the orthogonal testing algorithm. The type of antigen and the Ig class of both tests in an orthogonal testing algorithm should be considered when interpreting test results. For example, a person infected with SARS-CoV-2 may develop an immune response that is heavily biased towards a particular viral protein (e.g., spike protein). This scenario may result in discordant test results if the detection antigens in the first and second tests were spike protein and nucleoprotein, respectively. Similarly, the temporal dynamics of virus-specific IgM and IgG immune responses may differ following infection. In this scenario, using tests that detect different Ig classes (total Ig, IgM or IgG) may lead to discordant results.

At present, the immunologic correlates of immunity from SARS-CoV-2 infection are not well defined. Representatives from BARDA, CDC, FDA, NIH, the Office of the Assistant Secretary for Health (OASH), Department of Defense (DoD), and White House Office of Science and Technology Policy (OSTP) are working with members of academia and the medical community to determine whether positive serologic tests are indicative of protective immunity against SARS-CoV-2. This work includes assessing the level of antibodies required for protection from reinfection, the duration of that protection, and the factors associated with development of a protective antibody response. The kinetics of antibody response, longevity of antibodies, the ability of antibodies to protect from repeat infection, the protective titer of neutralizing antibody, and the correlation of binding antibody titers to neutralization ability are yet to be determined. Although animal challenge studies demonstrate protection in the short run, demonstration of long-term protection in humans will require future study. Hence, pending additional data, the presence of antibodies cannot be equated with an individual’s immunity from SARS-CoV-2 infection.

Some tests may exhibit cross-reactivity with other coronaviruses, such as those that cause the common cold. This could result in false-positive test results. Some persons may not develop detectable antibodies after coronavirus infection. In others, it is possible that antibody levels could wane over time to undetectable levels. IgM and IgG antibodies may take 1 to 3 weeks to develop after infection. Thus, serologic test results do not indicate with certainty the presence or absence of current or previous infection with SARS-CoV-2.

Recommendations for Use of Serologic Tests

Information that might impact serologic recommendations is rapidly evolving, particularly evidence of whether positive serologic tests indicate protective immunity or decreased transmissibility among those recently ill. These recommendations will be updated as new information becomes available.

Choice of test and testing strategy

Additional considerations on the use of serologic tests

* Detection of specific antibody in serum, plasma, or whole blood that indicates new or recent infection provides presumptive laboratory evidence of COVID-19 illness according to the Council of State and Territorial Epidemiologists (CSTE) interim case definition for COVID-19pdf iconexternal icon.