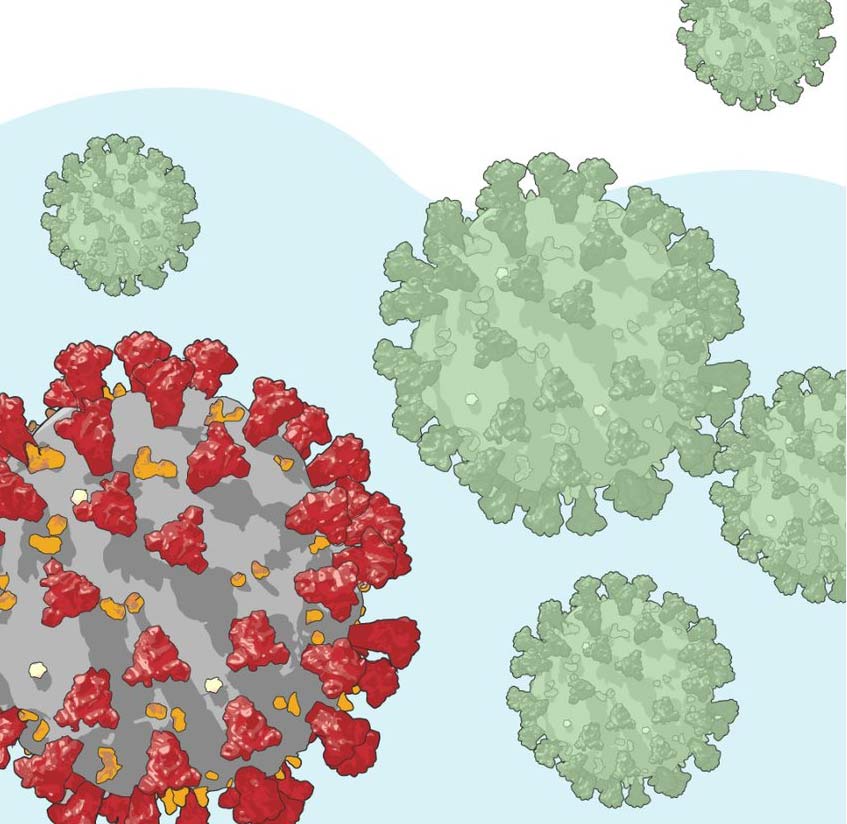 Viruses constantly change through mutation, and sometimes these mutations result in new variants of the virus. Numerous variants of SARS-CoV-2, the virus that causes COVID-19, have been tracked in the United States and globally during this pandemic. The Omicron variant, like other variants, is made up of a number of lineages and sublineages. These lineages are often very similar to each other, but there can be differences that affect the behavior of the virus.

CDC is closely tracking a wide range of Omicron sublineages, including three drawing recent attention. BQ.1 and BQ.1.1 are offshoots—grandchildren, if you will—of the BA.5 that’s been dominant for months. CDC data show that they seem to be spreading relatively quickly so far, but they’re still a small proportion of overall variants. CDC is also keeping a close eye on a sublineage called XBB based on international reports, although it’s still very rare in the United States.

Sometimes new variants emerge and disappear. Other times, they persist and continue to circulate in communities. As the virus spreads, it has new opportunities to change in ways that can make emerging variants more difficult to stop because the effectiveness of vaccinations or treatments may be reduced. We can monitor mutations from one variant to another and monitor the impact of these changes by comparing differences in real-world characteristics, such as effectiveness of vaccines or treatments. By studying each variant and understanding these differences, scientists can monitor whether a new variant might be more dangerous.

CDC is using multiple surveillance systems to monitor variants in the United States. Data from each system plays an important role in helping us understand the emergence of new variants, whether they’re entering the United States and spreading, and which variants are most prevalent within communities. On October 20, 2022, COVID Data Tracker added a new Variant Summary page, which summarizes three systems that are being used to monitor variants. For more information on these systems, see A Closer Look.

**Includes the 50 states, the District of Columbia, and Puerto Rico. 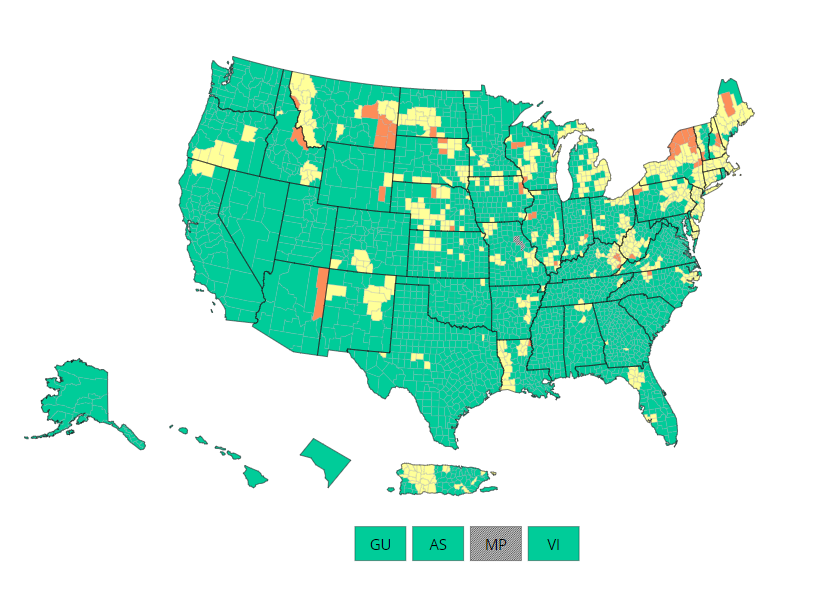 *CDC uses Nowcast projections to predict current variant proportions circulating in the United States. The median time from specimen collection to sequence data reporting is about 3 weeks. As a result, weighted estimates for the most recent few weeks may be unstable or unavailable. View Nowcast estimates on CDC’s COVID Data Tracker website on the Variant Proportions page. 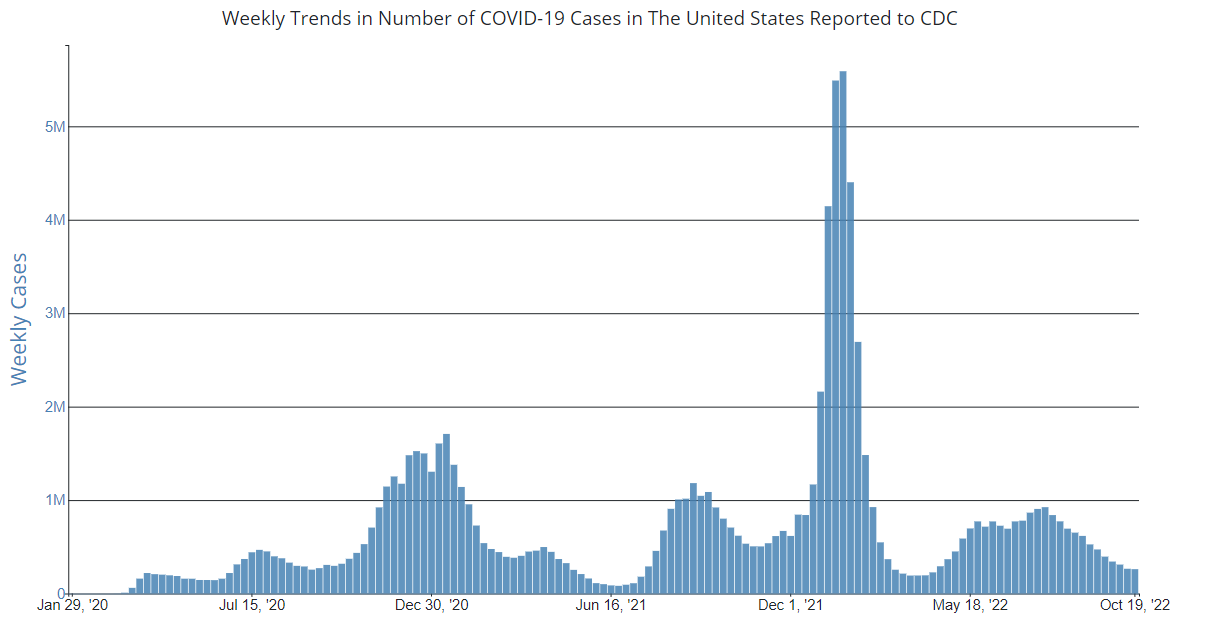 *Represents the number of people who have received the second dose in a two-dose COVID-19 vaccine series (such as the Pfizer-BioNTech, Moderna, or Novavax vaccines) or one dose of the single-shot Johnson & Johnson’s Janssen vaccine.

Daily Change in the Total Number of Administered COVID-19 Vaccine Doses Reported to CDC by the Date of Administration, United States

49.3%
Percentage of the Population ≥ 5 Years of Age with a 1st booster dose

*Represents the number of people who have completed a primary series and have received another dose of COVID-19 vaccine since August 13, 2021. This includes people who received their first additional dose or booster dose. 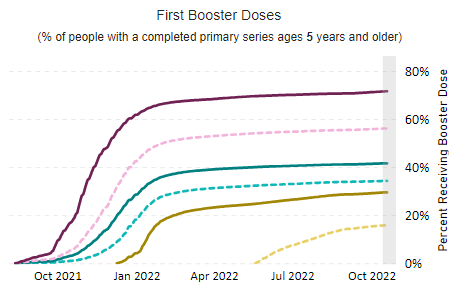 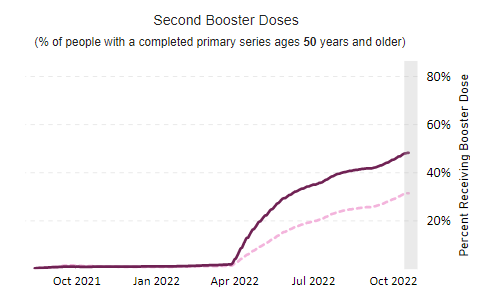 The start of consistent reporting of hospital admissions data was August 1, 2020.

New admissions are pulled from a 10 am EDT snapshot of the HHS Unified Hospital Data – Analytic Dataset. Due to potential reporting delays, data from the most recent 7 days, as noted in the figure above with the grey bar, should be interpreted with caution. Small shifts in historic data may also occur due to changes in the Centers for Medicare & Medicaid Services (CMS) Provider of Services file, which is used to identify the cohort of included hospitals.

COVID-NET: Hospitalization Rates among Adults and Children (All Ages) 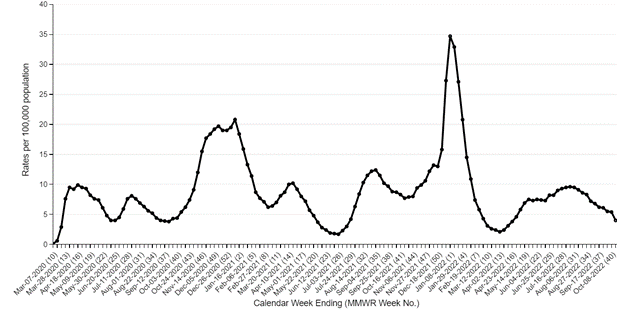 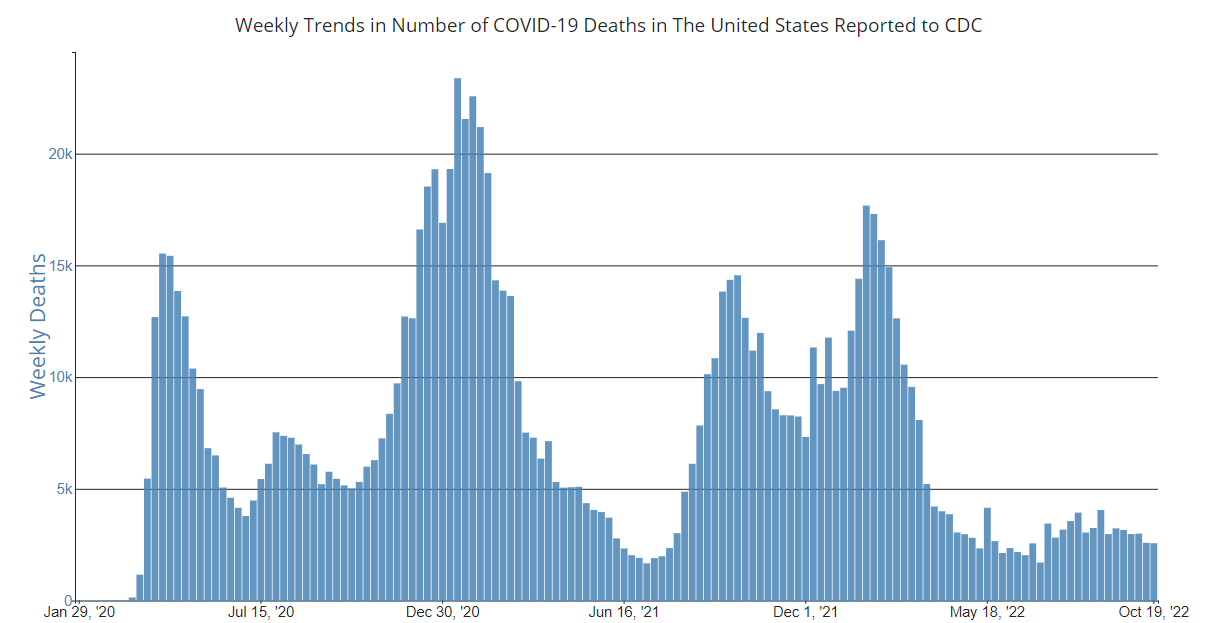 +0.56
Percentage point change in 7-Day Average % Positivity since Prior Week

*Test for SARS-CoV-2, the virus that causes COVID-19 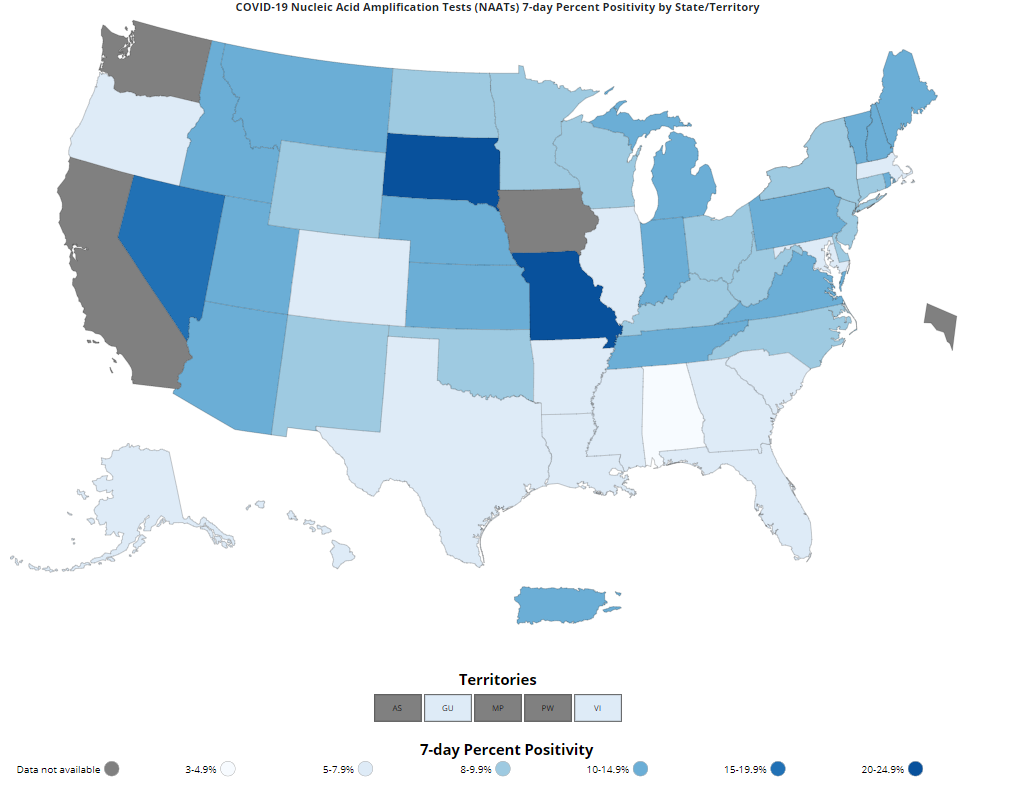 For more information on how to use wastewater data, visit CDC’s wastewater surveillance website.

*The virus that causes COVID-19

SARS-CoV-2 Levels in Wastewater by Site

A Closer Look Section presents more detailed information for readers who want to learn more about current issues of interest.

On October 20, 2022, COVID Data Tracker added a new Variant Summary page within the Variant and Genomic Surveillance data grouping. This page summarizes three systems that are being used to monitor variants. These systems also have dedicated pages on COVID Data Tracker: