This CDC report provides a weekly summary and interpretation of key indicators that have been adapted to track the COVID-19 pandemic in the United States. While influenza-like illness (ILI) declined, it is still elevated and laboratory confirmed COVID-19 activity continues to increase as do COVID-19 severity indicators (hospitalizations and deaths).

Public health, commercial and clinical laboratories are all testing for SARS-CoV-2, the virus that causes COVID-19, and reporting their results.  The national percentage of respiratory specimens testing positive for SARS-CoV-2 increased from week 14 to week 15 and is as follows:

Recent changes in health care seeking behavior are likely impacting data from both networks, making it difficult to draw further conclusions at this time. Tracking these systems moving forward will give additional insight into illness related to COVID-19. 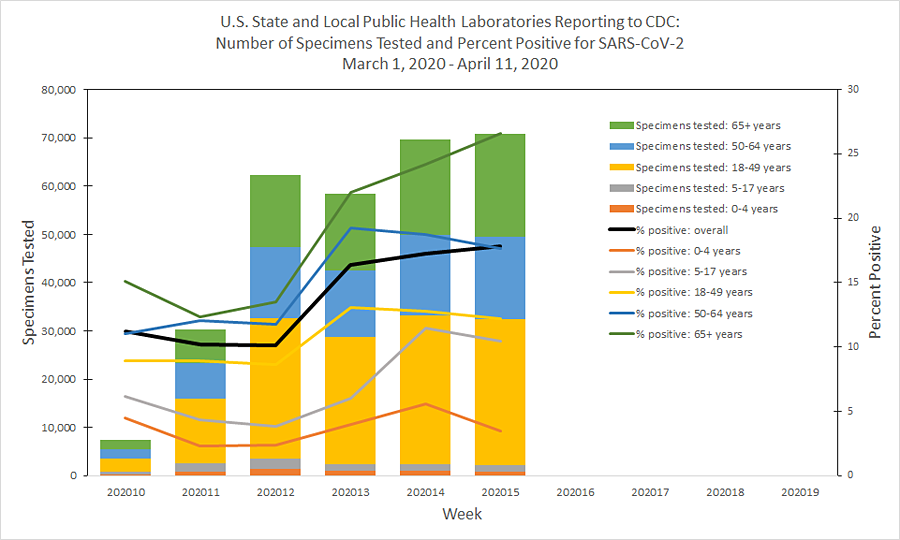 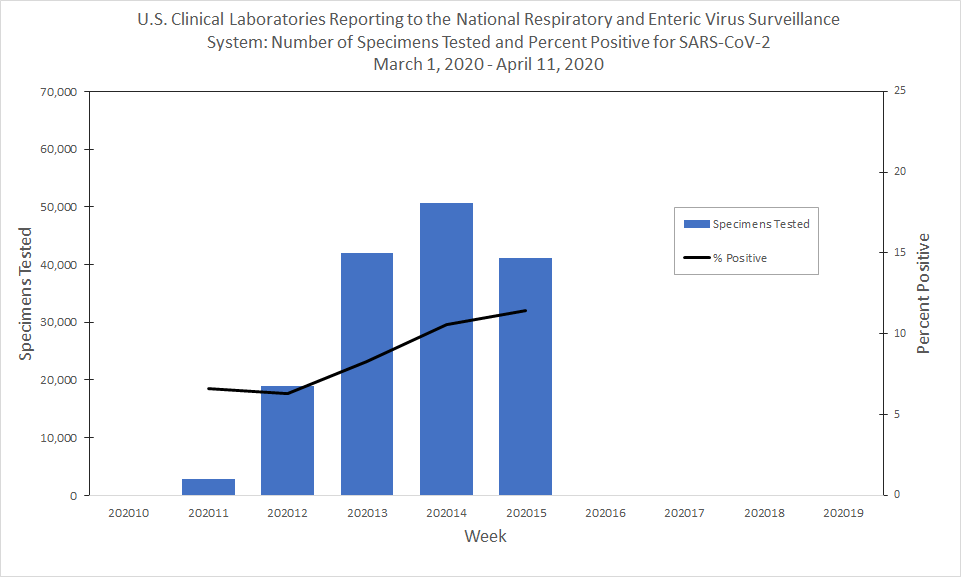 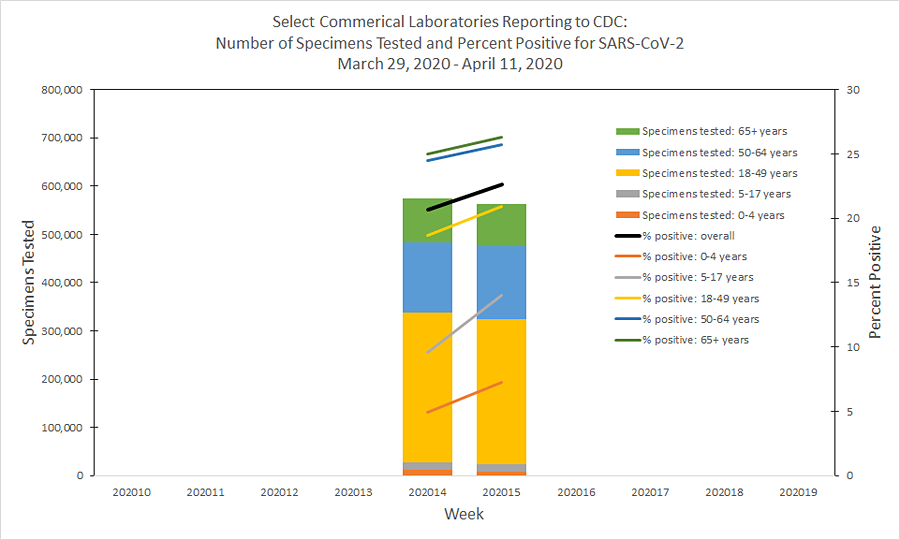 Two syndromic surveillance systems are being used to monitor trends in outpatient and emergency department visits that may be related to COVID-19. Each system monitors a slightly different syndrome, and together these systems provide a more comprehensive picture of mild to moderate COVID-19 illness than either would individually. Both systems are currently being affected by recent changes in healthcare seeking behavior, including increasing use of telemedicine and recommendations to limit emergency department (ED) visits to severe illness, as well as increased social distancing. These changes affect the numbers of people and their reasons for seeking care in the outpatient and ED settings.

Nationwide during week 15, 2.9% of patient visits reported through ILINet were due to ILI. This percentage is above the national baseline of 2.4% but represents the third week of a decline after three weeks of increase beginning in early March. The percentage of visits for ILI decreased in all age groups. Nationally, laboratory confirmed influenza activity as reported by clinical laboratories decreased to levels usually seen in summer months which, along with changes in healthcare seeking behavior and the impact of social distancing, is likely driving the decrease in ILI activity. 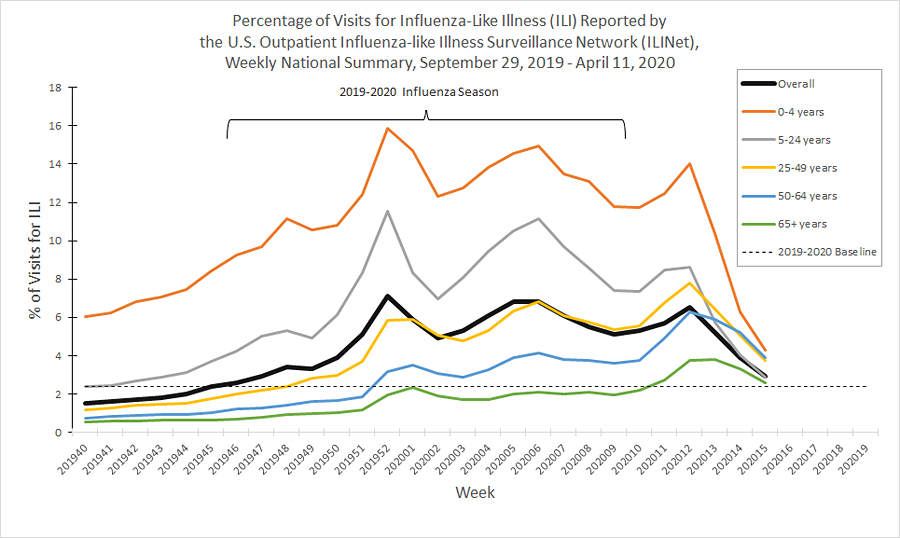 The number of jurisdictions at each activity level during week 15 and the change compared to the previous week are summarized in the table below and shown in the following maps. The decreasing percentage of visits for ILI described above are reflected in this week’s ILI activity levels. 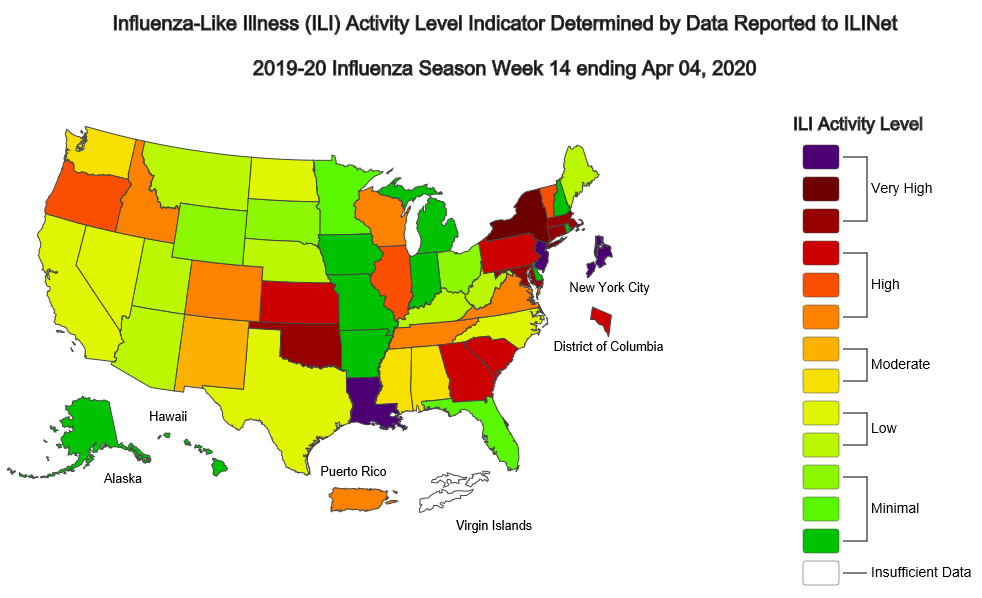 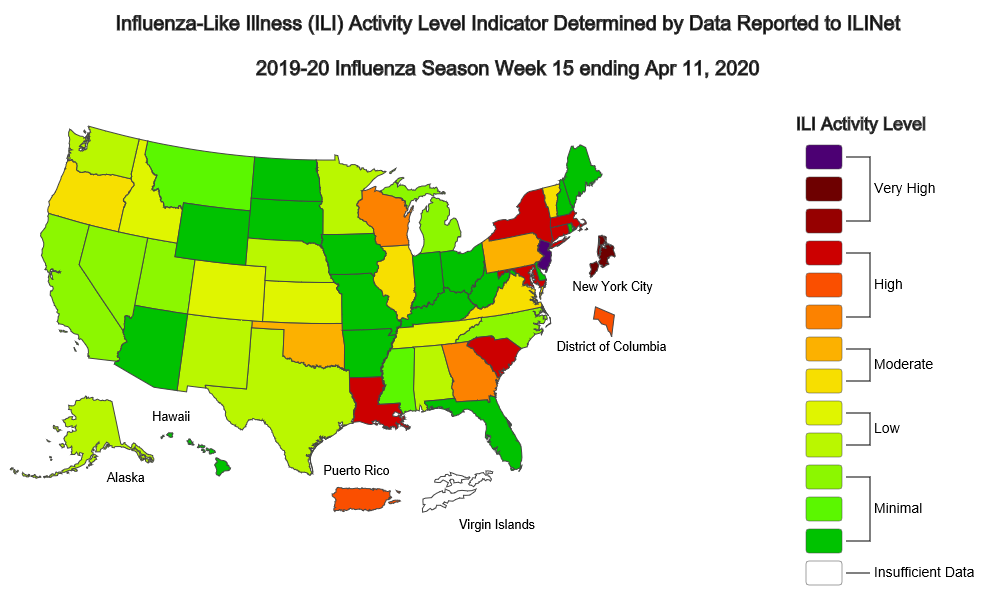 NSSP is a collaboration among CDC, federal partners, local and state health departments and academic and private sector partners to collect, analyze and share electronic patient encounter data received from multiple healthcare settings. To track trends of potential COVID-19 visits, visits for COVID-19-like illness (CLI) (fever and cough or shortness of breath or difficulty breathing or presence of a coronavirus diagnosis code) and ILI to a subset of emergency departments in 47 states are being monitored. The coronavirus diagnosis code was added to the CLI definition this week after input from public health and community partners. This addition changed the magnitude of the percentage of visits for CLI but it did not change the trends. 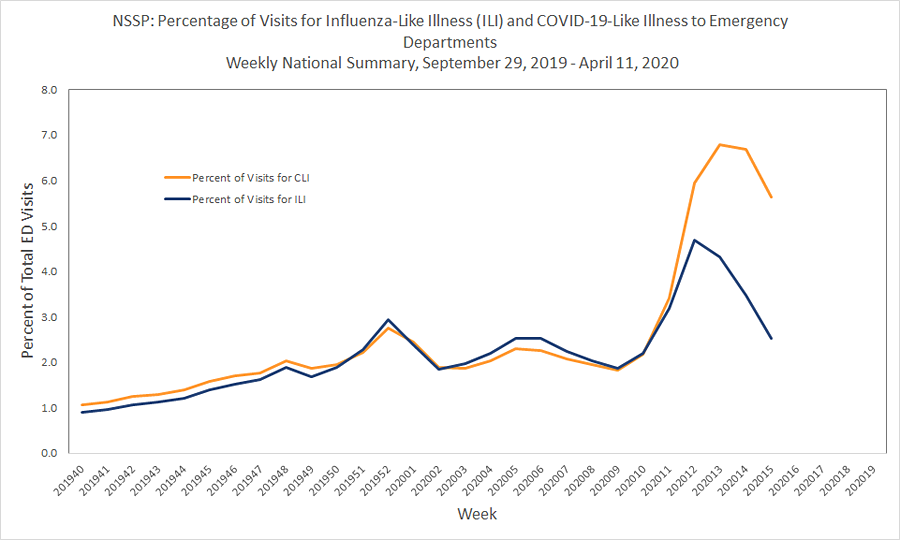 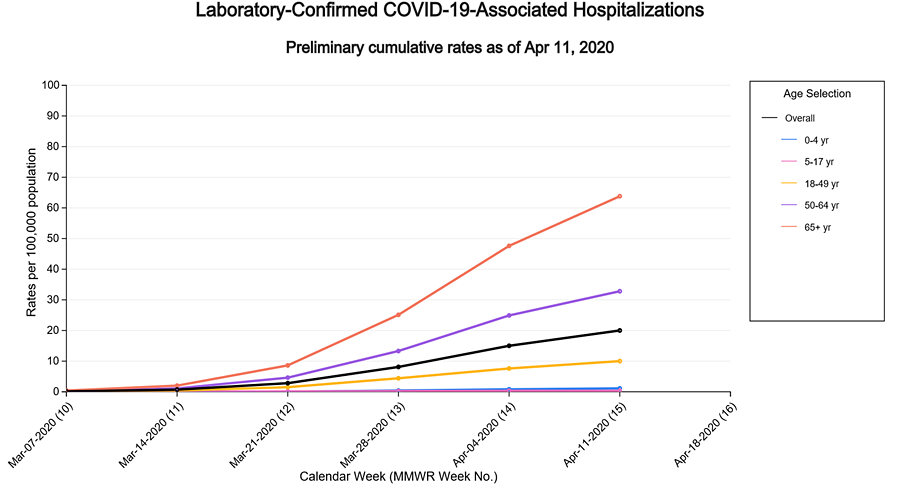 The National Center for Health Statistics (NCHS) collects death certificate data from vital statistics offices for all deaths occurring in the United States. Based on death certificate data available on April 16, 2020, 18.8% of all deaths occurring during the week ending April 11, 2020 (week 15) were due to pneumonia, influenza or COVID-19 (PIC). This percentage is above the epidemic threshold of 7.0% for week 15 and has been increasing sharply since the end of February. 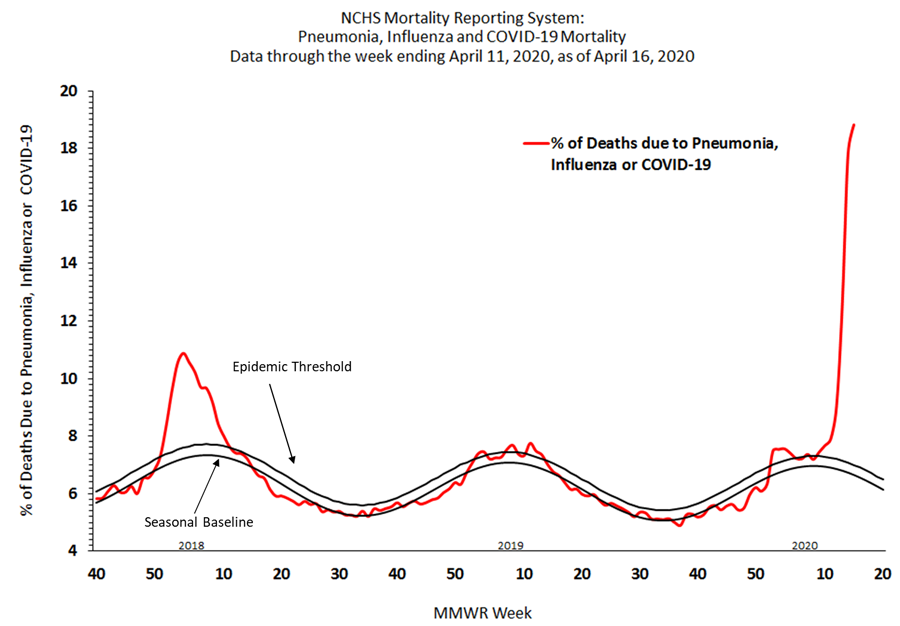