Stop Variants by Stopping the Spread

Viruses change (or mutate) all the time. While most changes do not affect how the virus behaves, every time a virus makes a copy of itself (or replicates) it has the potential to produce a variant virus that can spread more easily, cause more severe disease, or resist the body’s ability to fight them naturally or with vaccination. The best way to stop new variants from emerging is to stop the virus from spreading within our communities.

Just as we are working to fight the COVID-19 pandemic, emerging variants are threatening progress. If one of the variants is able to evade the vaccine, our progress will be slowed or potentially reversed. Our window of opportunity to halt the pandemic is now.

Three SARS-CoV-2 variants in particular have concerned global public health and healthcare leaders to date. This week, CDC published three reports on two of the variants. 1,2,3 Data from two new MMWR reports highlight how these variants present challenges both in the United States and internationally. One report showed that people in Minnesota with no recent travel to the United Kingdom (U.K.) were infected with the B.1.1.7 variant, first detected in the U.K. late last year. Another report found sharp increases in COVID-19 cases in Zambia that corresponded with an increase in infections caused by the variant that recently emerged in South Africa (the B.1.351 variant).

By the time a variant is detected in a community, it may already be spreading. Proven strategies to prevent spread can limit the impact of these variants. We can stop variants by decreasing cases. Everyone should wear a well-fitting mask and follow CDC’s prevention recommendations.

Modeling data have shown that a more contagious variant could lead to more cases, which would worsen the U.S. pandemic and reverse the recent decreases in numbers of new COVID-19 cases reported.5

A total of 1,523 B.1.1.7 variant cases have been reported in 42 jurisdictions. Twenty-one cases with B.1.351 in 10 jurisdictions and five cases with P.1 in four other states have also been detected in the United States. CDC and partners are increasing the numbers of specimens sequenced in laboratories around the country. The number of variants reported will likely increase as more specimens are sequenced and if the frequency of variants increases. Studies to determine whether variants cause more severe illness or are likely to evade immunity are underway.

There has been a five-week downward trend in cases. The highest 7-day moving average occurred on January 11, 2021 and was 249,048. The current 7-day average is 77,385 cases, which is a 68.9% decline. The 24.5% decrease in the 7-day average number of daily cases reported compared with the prior week also provides an encouraging sign of recent progress. Even with these declines, however, the 69,165 cases reported on February 17 remains higher than what was seen during either of the first two peaks in the pandemic. 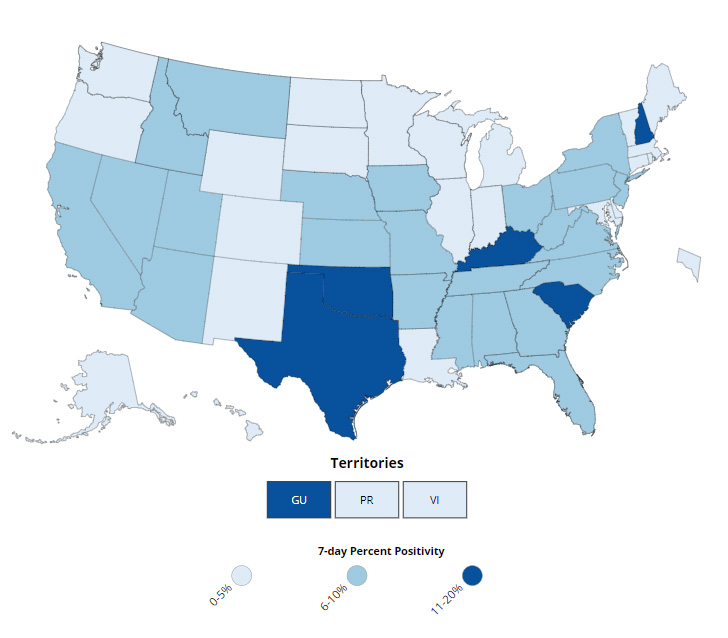 The numbers of new hospital admissions of patients with confirmed COVID-19 have decreased from the national peak of 18,006 admissions on January 5, 2021 to 6,841 admissions on February 16 (a 62% decrease). The average number of daily admissions fell by 21.8% compared to the previous week. 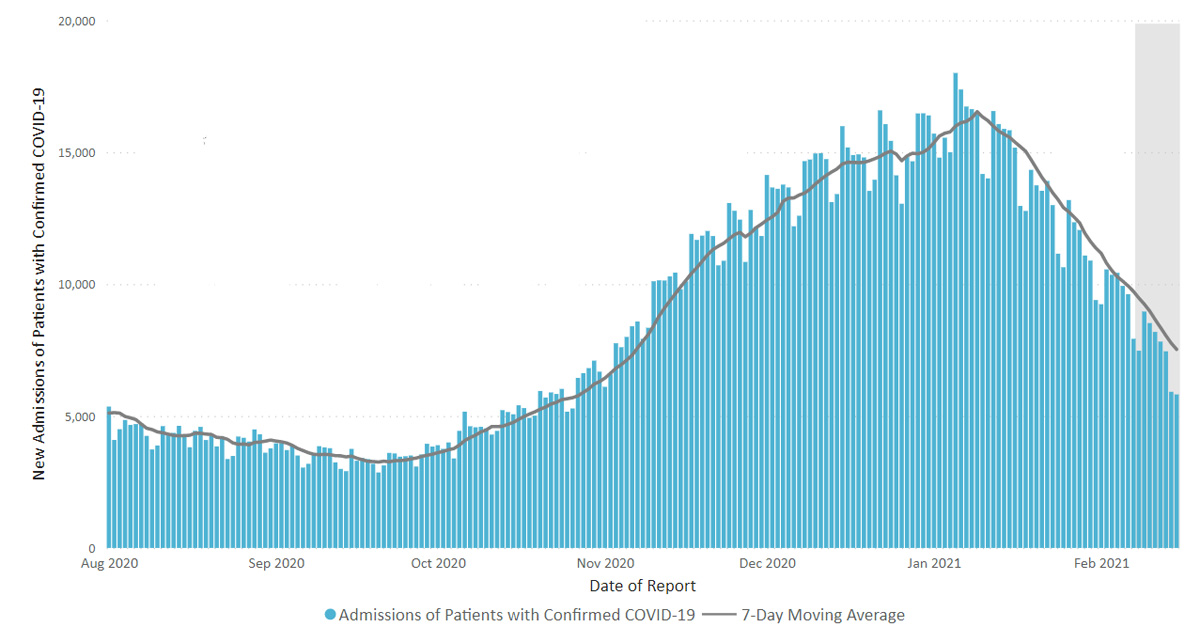 Note on new format: Effective Friday, February 12, 2021, COVIDView has been replaced with this new COVID Data Tracker Weekly Review. This new webpage and newsletter include visuals from the week and narrative interpretations using data from CDC’s COVID Data Tracker. Additional priority data will be added in future weeks, including race and ethnicity.

The Coronavirus Disease 2019 (COVID-19)-Associated Hospitalization Surveillance Network (COVID-NET) is an additional source for hospitalization data collected through a network of over 250 acute-care hospitals in 14 states (~10% of the U.S. population). Detailed data on patient demographics, including race/ethnicity, underlying medical conditions, medical interventions, and clinical outcomes, are collected using a standardized case reporting form.