Better, but Not Good Enough

Better, but Not Good Enough
Print
Related Pages
Subscribe to the Weekly Review

Don’t let your guard (or mask) down. COVID-19 cases, hospitalizations, and deaths continue to trend downward. But even with that progress, the daily numbers of new cases and deaths remain much higher than the first two peaks of the pandemic in the spring and summer of 2020.

The COVID-19 pandemic has crossed the one-year mark. About 27 million cases and about 470,000 deaths have been reported to CDC since the first case was identified in the United States on January 20, 2020. The numbers of COVID-19 cases, hospitalizations, and deaths vary substantially below the national level, and to help explain these differences future versions of COVID Data Tracker Weekly Review will present surveillance trends at the regional, state, or county levels. A national milestone in vaccinations was reached this week on February 11 with about 34.7 million people receiving at least one dose of vaccine, which is 10.5% of the U.S. population. This is terrific progress.

CDC’s goal is to get the pandemic under control as quickly as possible, both to save lives and to help people get back to the many important things they need and want to do. The emergence of variants, such as B.1.1.7, reminds us that we all need to re-double our efforts to prevent the spread of COVID-19. It is more important than ever that we all wear well-fitting masks, stay at least 6 feet apart from people we don’t live with, avoid crowds and poorly ventilated spaces, and wash our hands often. These practices done well by all of us, together with the continued effort to vaccinate more people, can help end this pandemic.

Compared with a national peak of 314,093 cases reported to CDC on January 8, 2021, the daily number of cases has declined by 69%. The current 23% decrease in the 7-day average number of daily cases reported also provides an encouraging sign of recent progress. Even with these declines, however, the 97,309 cases reported on February 11 remains higher than what was seen during either of the first two peaks in the pandemic. 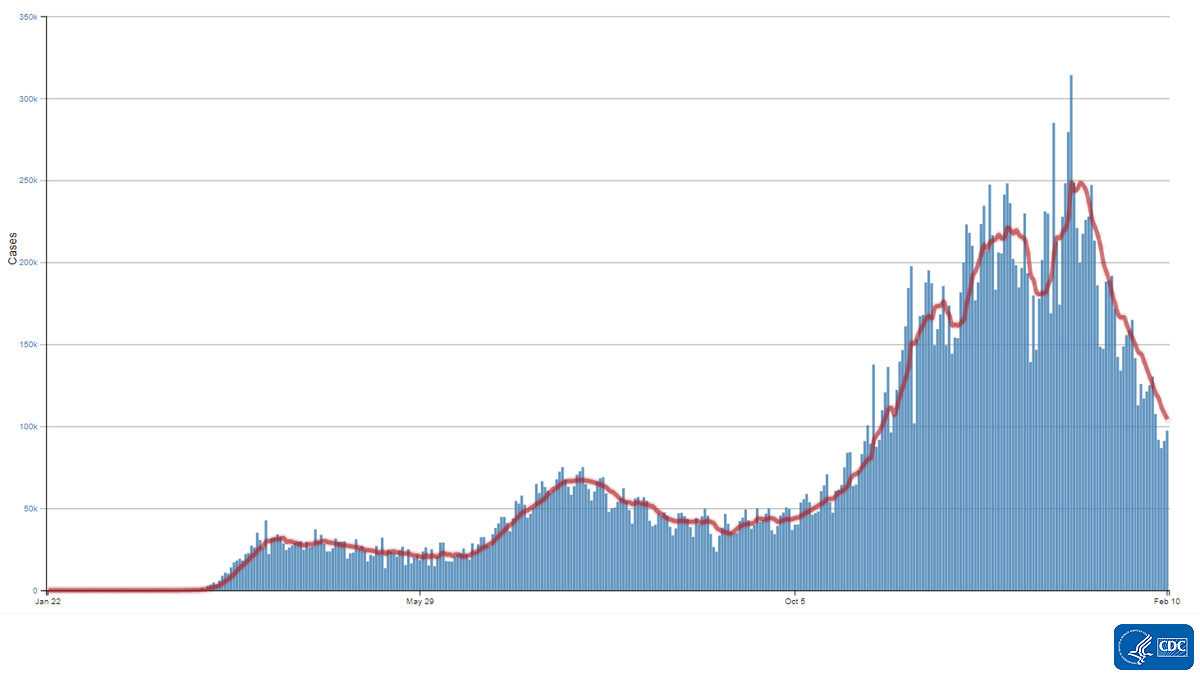 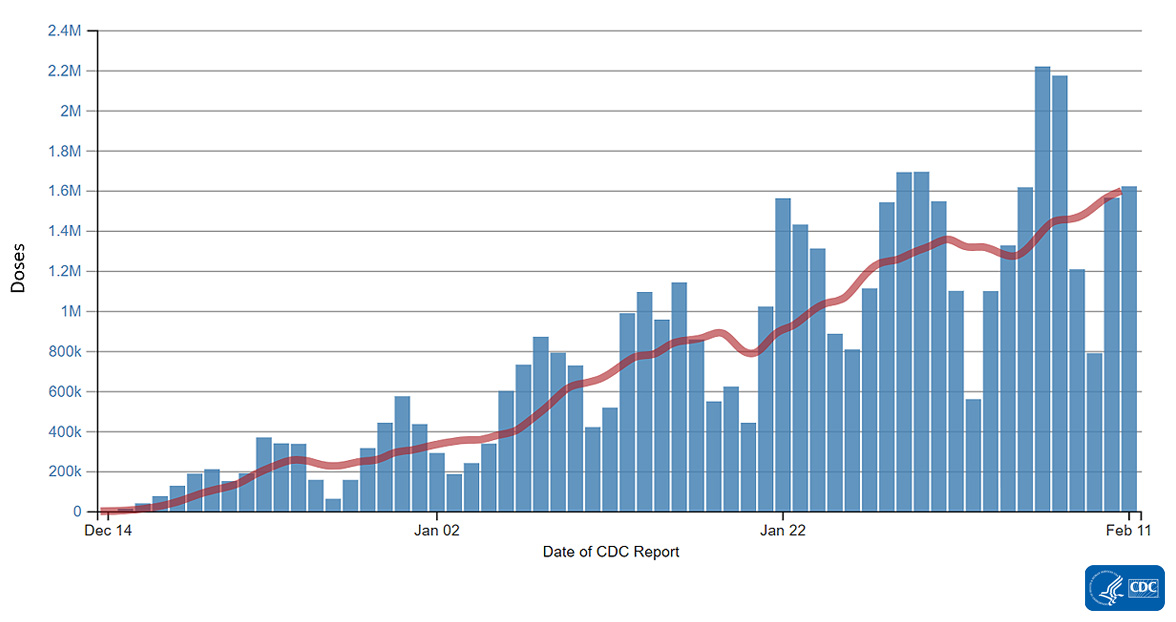 The numbers of new hospital admissions of patients with confirmed  COVID-19 have decreased from the national peak of 18,081 admissions on January 5, 2021 to 8,957 admissions on February 9 (a 50% decrease). The average number of daily admissions fell by 14% over the past week. 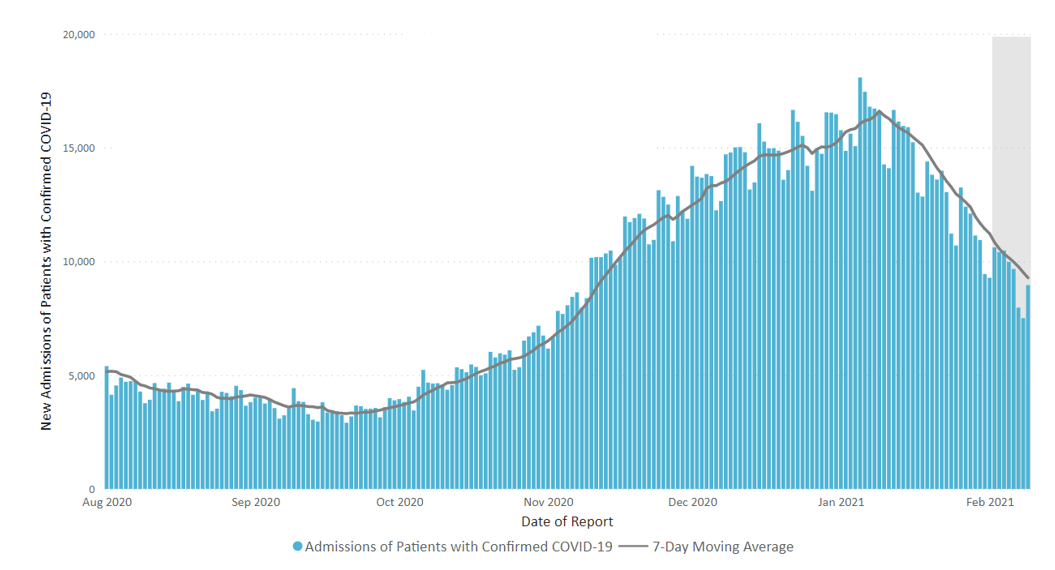 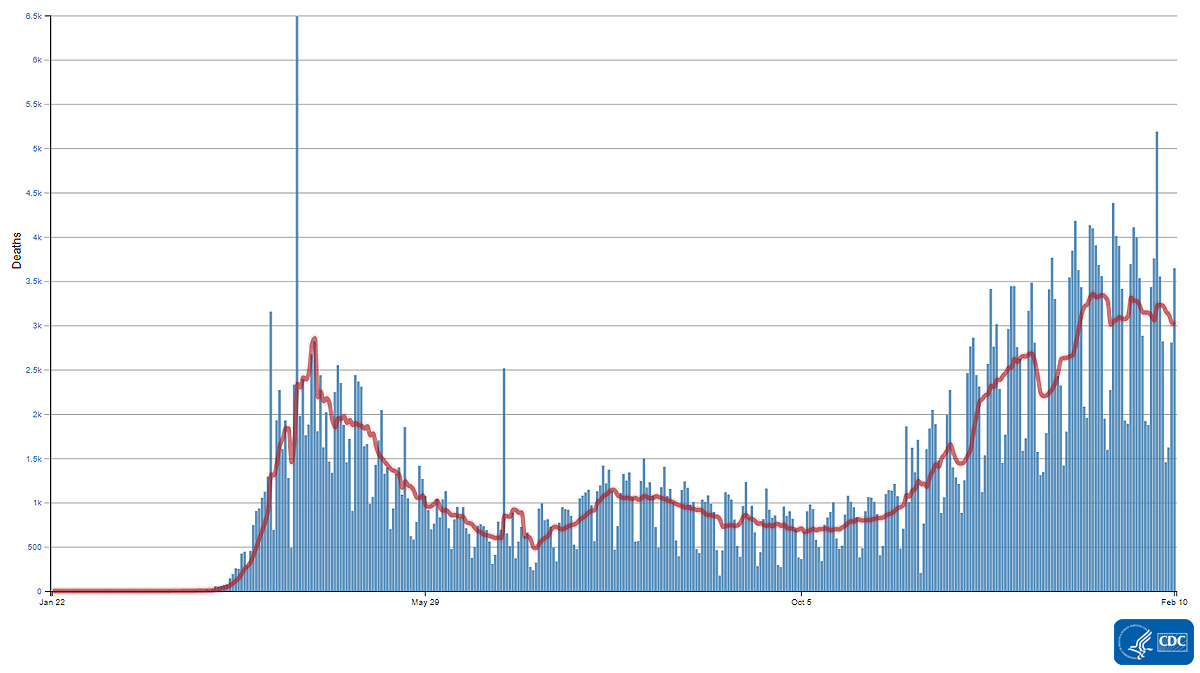 Three SARS-CoV-2 (the virus that causes COVID-19) variants of concern have been detected in the United States: B.1.1.7, B.1.351, and P.1. A total of 981 B.1.1.7 variant cases have been detected in 37 states, which is a 61% increase in the number of B.1.1.7 cases reported by CDC compared with the previous week (611 cases). Thirteen cases with B.1.351 in five states and three cases with P.1 in two other states have also been detected in the United States. CDC and partners are increasing the numbers of specimens sequenced in laboratories around the country. Studies to determine whether variants cause more severe illness or are likely to evade immunity are underway. For technical description, see https://www.cdc.gov/coronavirus/2019-ncov/variants/index.html. 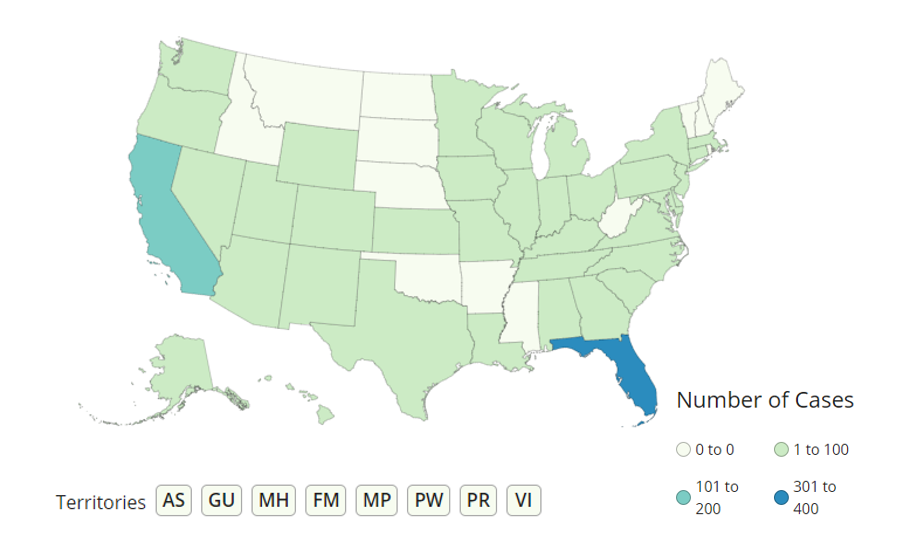 Note on new format: Effective Friday, February 12, 2021, COVIDView has been replaced with this new COVID Data Tracker Weekly Review. This new webpage and newsletter include key visuals from the week and narrative interpretations using data from CDC’s COVID Data Tracker. Additional priority data will be added in future weeks, including race and ethnicity.

The Coronavirus Disease 2019 (COVID-19)-Associated Hospitalization Surveillance Network (COVID-NET) is an additional source for hospitalization data collected through a network of over 250 acute-care hospitals in 14 states (~10% of the U.S. population). Detailed data on patient demographics, including race/ethnicity, underlying medical conditions, medical interventions, and clinical outcomes, are collected using a standardized case reporting form.