Resolve to be Safe

Resolve to be Safe 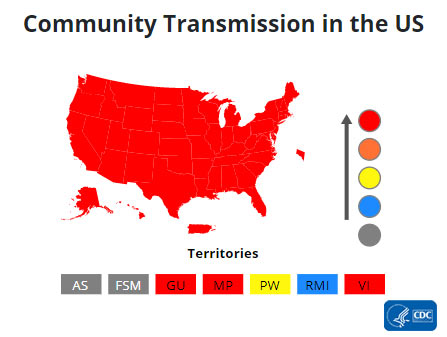 COVID-19 cases continue to increase rapidly across the United States. This surge is driven by the Omicron variant, which CDC’s Nowcast model projects may account for approximately 95% of cases. On January 5, 705,264 new cases were reported, more than doubling the January 2021 peak. The entire country is now experiencing high levels of community transmission. Hospitalizations are also on the rise. While early data suggest Omicron infections might be less severe than those of other variants, the increases in cases and hospitalizations are expected to stress the healthcare system in the coming weeks.

Given what we currently know about COVID-19 and the Omicron variant, CDC recently updated its quarantine and isolation recommendations for the public.* If you come into close contact with someone with COVID-19, you should quarantine if you are in one of the following groups:

If you have confirmed or suspected COVID-19, regardless of your vaccination status, stay home and isolate from other people for at least 5 full days. Wear a well-fitting mask when around others at home and in public for an additional 5 days. Testing may be used to help determine when to end your isolation period. For information about when and how to test, visit CDC’s website.

Vaccination remains the best way to protect yourself from COVID-19 and reduce its impact on our communities. Everyone should get vaccinated and boosted as soon as they are eligible, including people who have already had COVID-19. Find a vaccine.

*CDC’s updated recommendations reflect the impact to society, the latest science on disease severity, and when and for how long a person is maximally infectious. CDC will continue to evaluate these recommendations as more data become available.

Note to readers: You quarantine when you might have been exposed to the virus and may or may not have been infected. You isolate when you have been infected with the virus, even if you don’t have symptoms. When counting days for isolation, day 0 is the first day of symptoms. If you are asymptomatic, day 0 is the day of your positive viral test. For more information, visit CDC’s website.

*The median time from specimen collection to sequence data reporting is about 3 weeks. As a result, weighted estimates for the most recent few weeks may be unstable or unavailable. CDC’s Nowcast is a data projection tool that helps fill this gap by generating timely estimates of variant proportions for variants that are circulating in the United States. View Nowcast estimates on CDC’s COVID Data Tracker website on the Variant Proportions page.

Daily Change in the Total Number of Administered COVID-19 Vaccine Doses Reported to CDC by the Date of CDC Report, United States

73.9%
Percentage of the U.S. population that has received at least one dose

73.9%
Percentage of the U.S. population that has received at least one dose

62.3%
Percentage of the U.S. population that has been fully vaccinated*

62.3%
Percentage of the U.S. population that has been fully vaccinated*

*Represents the number of people who have received the second dose in a two-dose COVID-19 vaccine series (such as the Pfizer or Moderna vaccines) or one dose of the single-shot Johnson & Johnson’s Janssen vaccine.

The start of consistent reporting of hospital admissions data was August 1, 2020.

New admissions are pulled from a 10 am EST snapshot of the HHS Unified Hospital Timeseries Dataset. Due to potential reporting delays, data from the most recent 7 days, as noted in the figure above with the grey bar, should be interpreted with caution. Small shifts in historic data may also occur due to changes in the Centers for Medicare and Medicaid Services (CMS) Provider of Services file, which is used to identify the cohort of included hospitals. 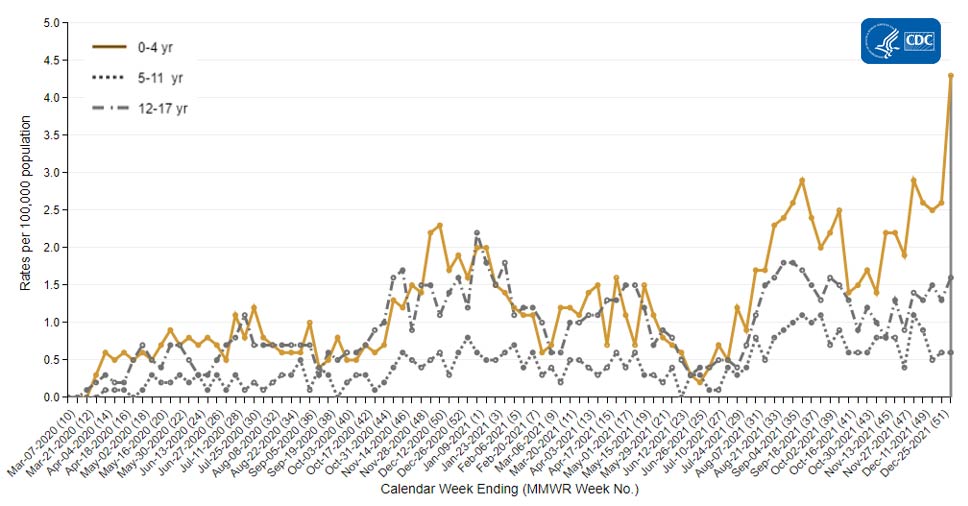 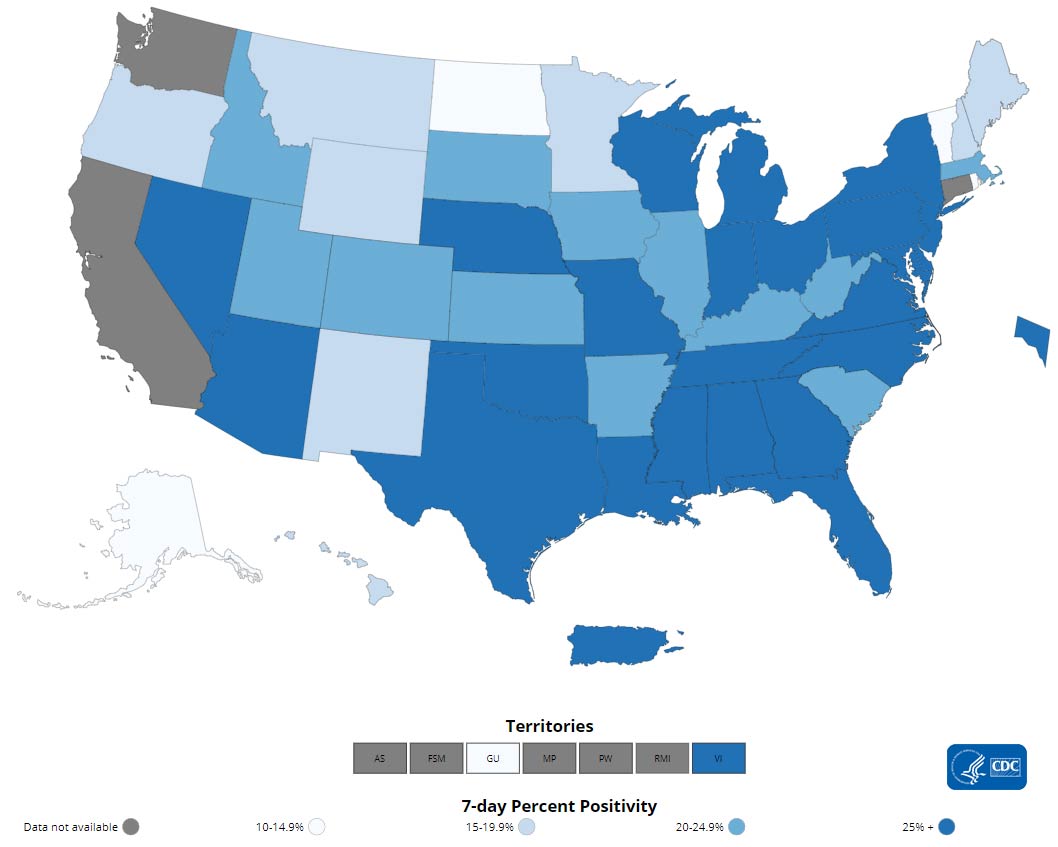 +9.32
Percentage point change in 7-Day Average % Positivity since Prior Week

+9.32
Percentage point change in 7-Day Average % Positivity since Prior Week

*Test for SARS-CoV-2, the virus that causes COVID-19

A Closer Look Section presents more detailed information for readers who want to learn more about current issues of interest.

A Closer Look: Update on the Omicron Variant

Since identifying the first case of the Omicron variant in the United States on December 1, 2021, CDC has been working with state, tribal, local, and territorial public health officials to monitor the spread of Omicron in the United States. On December 10, 2021, CDC released an MMWR article summarizing characteristics of the first Omicron infections in the country. CDC has also identified a rapid increase in infections consistent with what has been observed in other countries. Increases in infections are most likely due to a combination of two factors: increased transmissibility and immune evasion (the ability of the variant to evade immunity conferred by past infection or vaccination). Though the precise contribution of each of the two factors remains unknown, a substantial degree of immune evasion is likely as has been demonstrated in early in vitro studies.

CDC uses genomic surveillance to track variants of SARS-CoV-2 in the United States. CDC’s national genomic surveillance can detect a variant that is circulating at 0.1% frequency with 99% statistical confidence. Current-week estimates of variant proportions are provided by CDC’s Nowcast modeling data, enabling timely public health action while specimens are undergoing the two- to three-week sequencing and analysis process. As of the week ending December 25, 2021, Nowcast estimated that Omicron accounted for 95.4% of circulating SARS-CoV-2 strains while Delta accounted for 4.6% of circulating strains.

The clinical severity profile of Omicron infection will strongly influence its impact on U.S. hospitalizations and deaths. A study from South Africa demonstrates that in the first four weeks of the Omicron variant wave there were lower rates of hospitalization compared to the first four weeks of the Beta- or Delta-dominated waves in Gauteng Province. There was also less severe illness reported for those that were admitted. A study conducted in Canada found that the risk of hospitalization was 54% lower for Omicron cases compared with Delta cases.

Even if the proportion of infections associated with severe outcomes is lower than with previous variants, the absolute numbers of people with severe outcomes could be substantial given the rapid increase in the number of infections over the past three weeks. In addition, demand for ambulatory care and supportive care for treatment of mild cases could also stress the healthcare system. Geographical differences in the predominance of the Omicron variant versus ongoing Delta variant infections and the rising burden of illness caused by other respiratory pathogens, such as influenza, may stress healthcare systems regionally to various degrees. On December 23, 2021, CDC issued updated guidance to enhance protection for healthcare personnel, patients, and visitors to address concerns about potential impacts on the healthcare system given a surge of SARS-CoV-2 infections. On January 4, 2022, CDC also issued updated guidance on quarantine and isolation for the public.

Some studies have demonstrated the importance of booster doses in protecting against infection with Omicron, and a lower effectiveness of the primary series of vaccines alone. Current CDC recommendations for vaccines and booster shots are expected to protect against severe illness, hospitalizations, and deaths from infection with the Omicron variant. Therapeutics, including monoclonal antibody treatments and antivirals, are also available for preventing and treating COVID-19 in specific at-risk populations. These therapeutics differ in efficacy, route of administration, risk profile, and whether they are authorized by the U.S Food and Drug Administration for adults only or adults and certain pediatric populations. Some therapeutics are in relatively short supply, but availability is expected to increase in the coming months. Current recommendations were summarized in a CDC Health Alert Network Health Advisory, Using Therapeutics to Prevent and Treat COVID-19, published December 31, 2021.

Scientists around the world, including researchers at CDC, are working quickly to learn more about the Omicron variant. The recent emergence of Omicron and the fact that Delta is still a circulating variant further emphasize the importance of getting a primary vaccination series and, if eligible, a booster and continuing prevention measures.