A Double Dose of Trouble 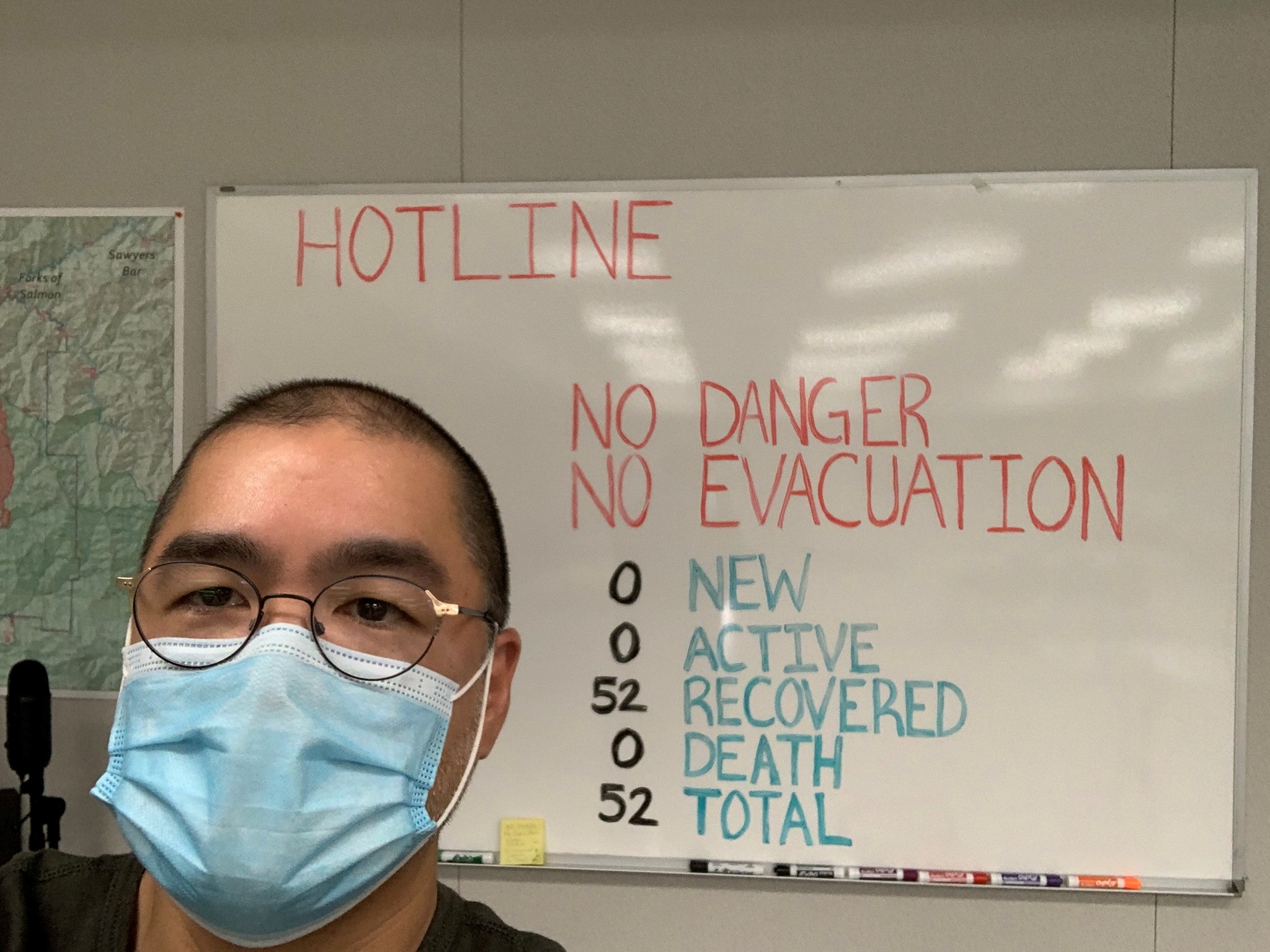 Dr. Scott Santibañez combined the skills he picked up from seminary with his public health skills in fighting the two calamities that struck Northern California in 2020.
Photo by Dana Haberling

To Scott Santibañez, the call sounded like a routine request in a 22-year career at CDC that has been filled with such calls. It proved to be anything but.

During the first half of 2020, the 3,500-member Hoopa Valley tribe in northern California had managed to stay largely free of COVID-19, with only a few cases. But in August, the numbers began to soar, reaching 40 cases in a few days.

Tribal leaders set up an emergency operations center and called Atlanta, where CDC officials tapped Santibañez and two of his colleagues, Konrad Hayashi and Dana Haberling, for deployment. Scott, an infectious disease physician who started at CDC in the Epidemic Intelligence Service and now helps oversee research into new disease threats, was a logical choice.

Scott’s parents had emigrated from the Philippines and settled in a coal mining and railroad town in West Virginia’s Appalachian Mountains, where Scott was born.

“As a physician, my dad was always interested in keeping people healthy,” Scott says. “I wanted to follow in his footsteps.”

Scott did just that, becoming a physician who worked with underserved populations in the Mississippi Delta and people experiencing homelessness in New York City during the AIDS epidemic’s early days. But his interests soon widened.

“I realized that, in addition to treating patients one at a time, it’s important to think about how we can improve the health of entire communities,” he says. “That led me to CDC.”

While at CDC, Scott further developed his interest in learning about other cultures, spending nights and weekends in seminary, where he learned about diverse cultures and faith traditions.

“I realized that, often, faith communities can play an important role in reaching people, because they understand local beliefs and culture,” he says.

That understanding proved key to his work in the Hoopa Valley.

At the reservation, Hoopa Valley Tribe and K’ima:w Medical Center were already busy caring for the sick and encouraging people to wear masks in public and practice social distancing. The next goal was to determine how widespread the virus was.

With CDC team members serving as advisors, the tribal council mandated COVID-19 testing for all tribal employees and organized mass-testing events. To the relief of Scott and his team, tests on the approximately 860 tribal employees identified only six people who tested positive. But at that point, things got complicated.

“At one of the community testing sites, we started to notice ash falling from the sky. It was kind of unnerving. You could catch it in your hand. Like snow flurries.”

On the horizon, he saw a helicopter dropping water on a wildfire. “Eventually, the smoke got so bad that we couldn’t go outside without an N95 mask,” Scott says.

Now, instead of fighting one public health threat, they were fighting two—shifting from trying to limit the spread of COVID-19 to preparing for possible wildfire evacuations in the middle of the COVID-19 response.

The team from Hoopa Valley and CDC began by identifying people more likely to become severely ill—people who had diabetes, hypertension, cardiovascular disease, emphysema, and other chronic medical conditions—who might need extra help from emergency responders during an evacuation. They put together plans to test people for the virus that causes COVID-19 before they arrived at the shelter, paying careful attention to hygiene and social distancing and ensuring that anyone with COVID-19 symptoms would be housed separately.

The tribe’s resources were a huge asset. Its fire chief doubled as the COVID-19 incident commander. Its archeologist was the deputy incident commander. The editor of the local newspaper published articles that countered disinformation. K’ima:w Medical Center staff identified people at high risk. And the tribal chairman hosted radio programs about the pandemic.

Thankfully, their evacuation planning proved unnecessary. By mid-September, the fires were at bay and the number of COVID-19 cases had plunged. Scott credits the success to the work of the tribe in leading the response.

“They were making the decisions,” he says. “CDC was not there to dictate how to do things. We were there in more of an advisory role—helping people to understand, ‘This is what we know from the science.’”

For Scott, the work proved to be a highlight of his career at CDC.

“I’m grateful that I had the opportunity to work side-by-side with friends from Hoopa and be part of this collaborative effort,” he says.