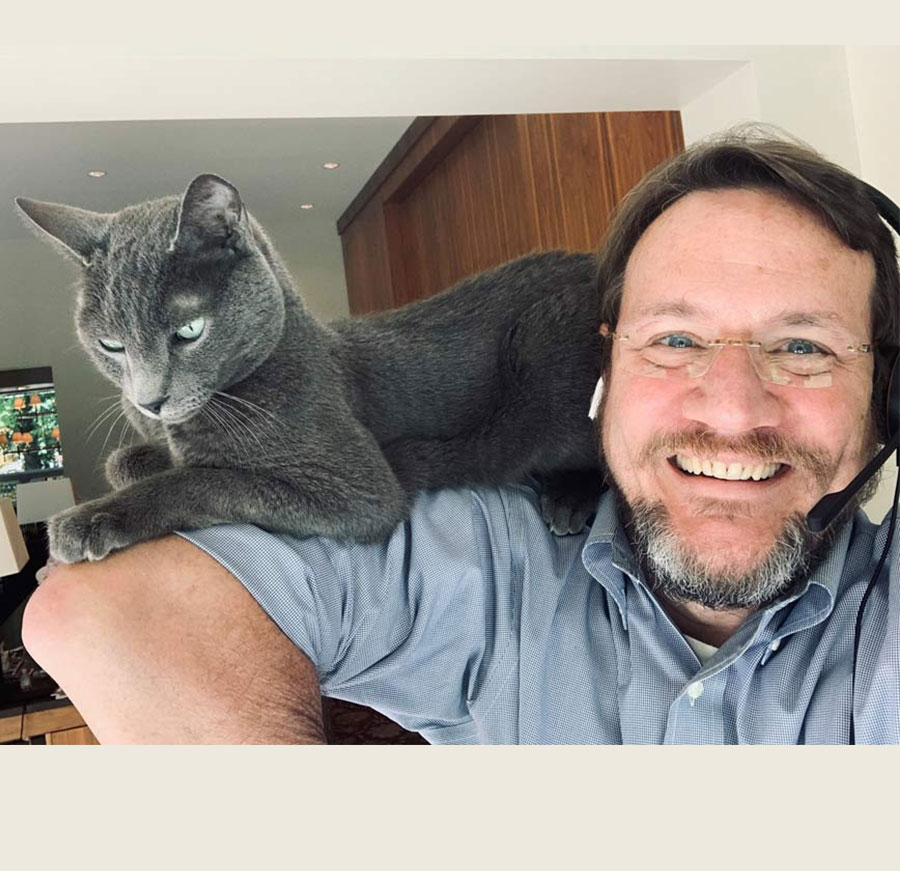 In long days at his dining-room table, Dr. John Brooks is looking for clues to bring COVID-19 to an end.

John, a CDC medical epidemiologist, is the chief medical officer for the agency’s COVID-19 response. He and his team of more than a dozen—all working remotely during the outbreak—pore over scores of newly published reports on the disease, compiling the highlights to share with researchers throughout the agency and figuring out how to apply those findings.

“The science is moving so quickly. There are easily a couple of hundred new publications daily,” John says from his makeshift home office, where his cat Cosmo is frequently at his elbow.

John has been part of CDC’s responses to several dangerous diseases over the years, including the 2014-2016 Ebola outbreak in West Africa and the Zika virus outbreak in the Western hemisphere in 2015-2016. But while responders had a built-in base of knowledge to tackle those illnesses, COVID-19 is brand new and has thrown curveball after curveball at those trying to stop it.

“The scale is unprecedented. The speed at which this event has unfolded is unprecedented,” John says. “And it’s like every month, something terrible, something really weird, comes along … We can’t think of it like anything we’ve known before.”

John came to medicine in a roundabout way. His interest was piqued in 7th grade, when he came across the 1926 book “Microbe Hunters,” which profiled historic disease researchers like Louis Pasteur and Walter Reed.

“I was totally enthralled by the detective work aspect of things,” John says.  But when he got to college, he says he was intimidated by the pre-med coursework. Instead, he became a geologist specializing in soil chemistry, then got a job interviewing and hiring expert medical witnesses for a law firm.

“I realized that what had seemed very intimidating was something I grasped easier than I thought,” he says. He started medical school at Harvard at 30. “I think I was the second-oldest in my class,” he says.

He came to CDC in 1998 as an officer in the Epidemic Intelligence Service, the “disease detectives” who trace outbreaks. Today, he’s the chief medical officer for CDC’s Division of HIV/AIDS Prevention, where he’s focused recently on putting the president’s national “Ending the HIV Epidemic” initiative into action.

The COVID-19 pandemic has meant he and other CDC responders will be stepping away from their normal research again. But he adds, “We need everybody to focus on this right now. People all around the agency are dropping everything they do to focus on this.”

He also carries a bit of family history into this fight: His mother survived polio at age 3, more than a decade before the discovery of a vaccine, when that disease drove children indoors and closed pools and playgrounds each summer. The long-term effects of the disease left her unable to walk unaided, eventually requiring her to use a wheelchair starting in her 40s.

John hears an echo of those days as countries around the world have to endure sweeping closures to mitigate the spread of this new disease.

“The modern world as we know it has been made possible because of the benefit we’ve had from effective vaccines, and now we have to go back to the old-fashioned ways of preventing disease,” he says. “Over the history of mankind social distancing measures and other non-pharmaceutical interventions aren’t something new. But for our modern society, it may seem very new. I hope one of the lessons learned here is we realize the remarkable benefit that vaccines hold.”