The Kindness of Strangers

The Kindness of Strangers
Español | Other Languages
Print
Related Pages

A sense of dread gnawed at Dr. Rachael Zacks for the first time in her career. 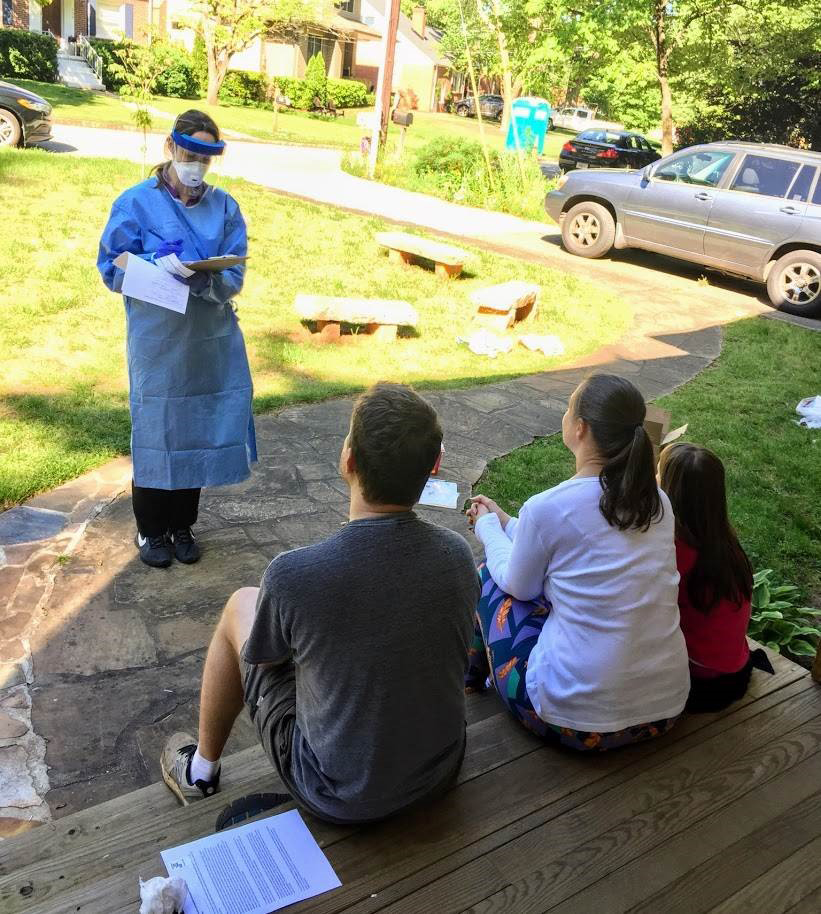 She had deployed to many international crisis regions for CDC, but in March, as the United States began grappling with COVID-19, Rachael went out for the first time in her own country to track the disease’s spread. Social media disinformation and public discontent had stoked her worries that some residents might greet CDC teams with suspicion when they knocked, asking to draw blood.

“I’ve gone to very remote places in this world and worn CDC garb and never been nervous about the reaction I would get because I feel if people see that we’re here to help, they usually trust us,” says Rachael, a physician and officer in CDC’s Epidemic Intelligence Service (EIS).

Five days after returning to Atlanta from Ebola vaccine work in South Sudan, Rachael faced her fears and flew to Seattle with her colleague Jon Dyal, a physician and public health professional who also specializes in particularly dangerous viruses, like Ebola. The two went to test people who had close contact with one of the US’s first-known COVID-19 patients to see whether they had produced antibodies against the disease, indicating the virus that causes it had spread to them, too.

“Everywhere we went was a ghost town. The airports were empty. It was eerie to walk around downtown Seattle and not see another human. We felt like we were in an alternate reality zombie movie where we were the last humans on Earth,” Rachael says.

Wearing protective gear and CDC identification, she and Jon began visiting homes. Door after door opened to smiles and kindness.

“It actually renewed my faith in humanity,” Rachael says. “They wanted to be part of the solution. People were behind us and wanted to help make things better.”

The blood samples Rachael and Jon collected delivered a scientific surprise. None of the people who had close contact with the infected man had produced antibodies, not even those who had been in the car with him while he had symptoms.

The findings helped fuel a global discussion about how COVID-19 spreads and the possibility that super-spreader individuals and super-spreader events might play a big role.

While Rachael and Jon were in Seattle, super-spreader outbreaks ravaged eldercare facilities outside of town. The two joined other EIS colleagues to trace contacts there in long-term care facilities where COVID-19 had caused half of the residents to be hospitalized.

Not being able to hug surviving patients at the facilities or people who lost loved ones was hard for Rachael, but she could not risk spreading the disease. To keep them and herself safe, she comforted them over the phone.

“The hardest part for me personally was seeing people’s sense of helplessness. In public health, it’s our job to support them through that,” Rachael says.

She returned to Atlanta, where, after self-isolating, she worked in Atlanta-area counties on a CDC pilot study about asymptomatic spread, which is when people who have no symptoms spread COVID-19. Science has since shown that it accounts for much of the pandemic’s progression.

Rachael has also seen symptoms of COVID-19 so extreme that they led to a double lung transplant in one patient.

“The scariest part has been that for a good number of people, this virus is so severe, and it’s not just people with pre-existing conditions,” Rachael says.

In mid-July, Rachael deployed to Denver, and much had changed. Airports were packed, and nearly all passengers wore masks. In Denver, hardly a face was not covered.

In her personal life, working in the US has given Rachael more time with her partner, and in her home office, she is eying new projects. One would take her back to Africa to study how badly COVID-19 affects malnourished children.

“A pandemic can make us realize we are all truly connected,” Rachael says, “here at home and across the whole world.”