A Different Kind of Outbreak 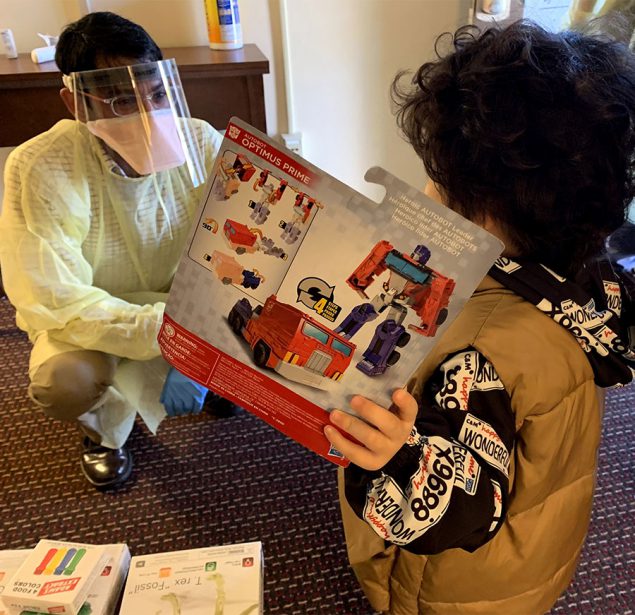 CDC Medical Officer Vikram Krishnasamy delivers a toy and a medical checkup to a child in quarantine at Lackland Air Force Base in February. 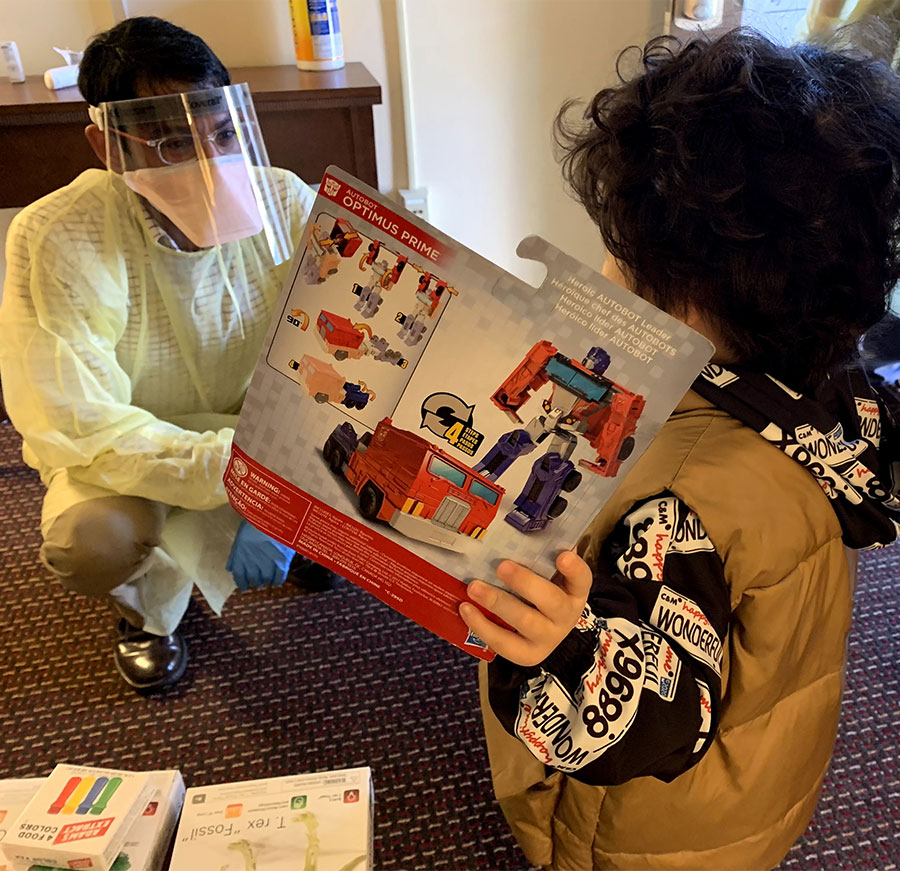 Sometimes, fighting a pandemic means driving long stretches from hospital to hospital across the desert.

Other times, it can mean handing out a toy to soothe a nervous child.

Dr. Vikram Krishnasamy has done both in the months since COVID-19 hit the United States. Krishnasamy, a CDC medical officer, has been in the field twice—first to help repatriate Americans returning from Hubei Province, China, where the pandemic began; and again to support the tribal government of the Navajo Nation, which sprawls across three Southwestern states.

In that second deployment, Krishnasamy was one of about a half-dozen CDC staffers who advised Navajo leaders on epidemiology, disease surveillance, and infection control steps as the number of cases there began to rise.

“We drove about 1,300 miles to visit most of the healthcare facilities over a two-week period,” Krishnasamy said. “We walked through their infection control practices and gave them guidance on any issues they were having, and we made sure they were up to speed with the latest guidance published by CDC.”

And in mid-February, he was among the CDC staffers dispatched to Lackland Air Force Base in San Antonio, Texas. Lackland was one of several military bases where State Department repatriation flights brought Americans returning home from Hubei Province after travel restrictions had been imposed by the government of China in the early days of the COVID-19 pandemic, and those travelers were quarantined on the base for two weeks.

Krishnasamy monitored the travelers for symptoms and helped develop procedures to isolate, transport, and admit any who showed symptoms of the disease to a hospital. The people in quarantine included children, who on at least one occasion received donated toys to help them through the quarantine days and daily medical checks.

“There were between 90 and 100 people who were quarantined on a military base in San Antonio with US marshals outside enforcing the quarantine,” Krishnasamy said. But despite the unusual circumstances, “Everybody was great to work with. They understood the seriousness of the situation and were willing to work with us.”

The son of Indian immigrants, Krishnasamy was born and grew up in Columbus, Ohio. He went to college at Kent State University and earned his medical degree from Northeast Ohio Medical University.

“I was interested in a lot of subjects. Medicine was a way to tie it all together and do work that was all about letting people be their best selves,” he says. But he says his interest in public health began before college, during childhood visits to his father’s home in rural southern India.

“It was a life that was very different,” he says. “I think that was my initial inkling that there are population health needs everywhere.”

In 2016, Krishnasamy joined the Epidemic Intelligence Service, the “disease detectives,” where he investigated outbreaks of foodborne illness. In the months before the COVID-19 pandemic, he was part of CDC’s response to the outbreak of severe lung injuries linked to the use of e-cigarettes.

“With COVID-19, we are trying to determine how to respond without having the amount of information we have available to us for other diseases,” he says. “That’s a bit different than my previous outbreak experiences.”