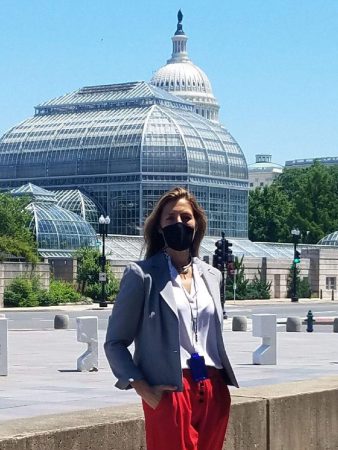 Silvina Masciotra normally works in one of the laboratory buildings at CDC headquarters in Atlanta.

But lately, this expert on HIV testing has been shuttling back and forth to Washington to help states keep their COVID-19 testing programs running. Silvina has been part of the CDC Testing and Diagnostics Workgroup assigned to work with the White House Coronavirus Task Force since June.

“It’s been an interesting journey,” she says. “I’ve never had a chance to work on something that’s so high-level.”

Working from the Department of Health and Human Services offices in the shadow of the Capitol, she provides advice to testing programs in several Northeastern and Midwestern states and two territories.

“We make sure the jurisdictions can reach out to us, evaluate their test plans and the equipment they have in place, and how to help them best use it,” she says. “We communicate with manufacturers to assist the jurisdictions with their needs and to help manufacturers understand the demand, so they can work with them in the most efficient way and everybody can meet their goals.”

This is not Silvina’s first emergency response. In 2016, she deployed to Angola to help stop an epidemic of yellow fever and then to Puerto Rico to assist with Zika virus testing. A longtime specialist in HIV testing, she has also advised HIV/AIDS programs in the Dominican Republic, Cambodia, and the Democratic Republic of the Congo.

But working among the top levels of the US government is a different experience, one largely dominated by meetings, both in-person and virtual.

“It’s not like being in a lab, when you go in and you have 1,000 tests or so run in a day,” she says. “This is more about communicating, reaching out, understanding the dynamic of how things work.” But in any response, flexibility and resilience are “super-important.”

Silvina got interested in biology in high school. In college, she got an internship in a laboratory “in the same hospital where I was born, actually,” she says. “That opened the door to what I’m doing today.” She got a job as a lab technician specializing in viral testing while finishing her degree. She got to work with both physicians and patients in that role “and to make a difference, which was something I was always very attracted to.”

She first came to CDC in the late 1990s after earning a master’s degree in molecular biology in her native Argentina. A three-month guest researching position led to a three-year graduate fellowship at CDC.

After additional study on biotechnology in Europe, she returned to a full-time job in 2003. Currently, she leads CDC’s HIV reference laboratory and test evaluation programs.

With COVID-19 still spreading, Silvina says “a lot of unknowns” about the disease remain. Researchers are working to answer those questions quickly – “But until we get all those answers, caution and prevention are the way to go,” she says. “We need to keep our distance and wear masks. We need to keep in mind the vulnerable population.”