A Mother’s Strength and a Neighbor’s Help 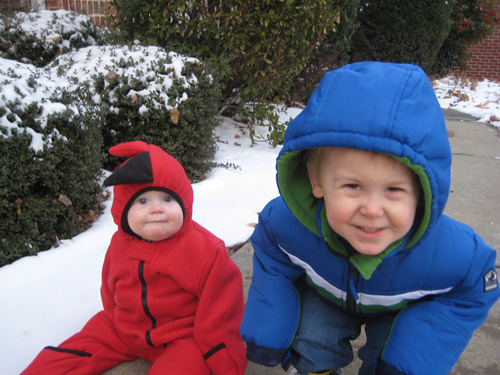 Unexpected emergencies, like a snow and ice storm that shuts down the city, can be stressful for everyone. But they can be downright terrifying for a mother separated from her children. Jen learned that keeping emergency supplies in the car, having a reunification plan at school, and developing connections with her neighbors can help her be better prepared the next time an unexpected event separates her from her children.

Jen began her morning anticipating a pleasant day of work followed by an evening playing in snow flurries with her 3-year-old son Grant and 9-month-old daughter Libby. She felt a twinge of sadness that her husband, Matt, was away on a business trip and would miss their daughter’s first snow. As snow began to fall more heavily than expected, her public relations agency closed and Jen hit the roads at 11:30 a.m. for the 45 minute journey to pick up her children and get home.

Stuck on the roads

Jennifer chose to take back roads and neighborhood streets that typically helped her avoid the heavy Atlanta traffic. It quickly became clear the back roads would not help her on this day. Traffic was at a near standstill. She inched along, measuring progress by car lengths and light poles. Three hours later, she was still in the same neighborhood as her office. 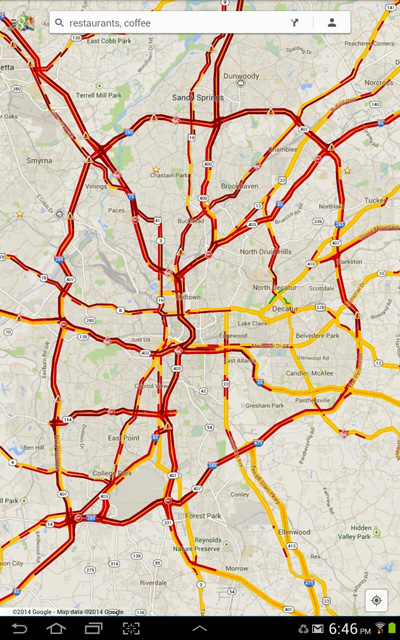 A snapshot of the roads in Atlanta. The road Jen had to navigate home are all in red. Source: Google Maps.

Frustration and hunger set in. A seasoned mom of two, she scavenged the diaper bag for snacks. A breakfast bar made for a light lunch. Lunch turned to dinner and frustration turned to fear. Her car charger kept the phone battery full, but it was impossible to connect on a call. While stuck in a nonmoving car, she texted with her husband who searched for alternative routes from half the country away. A coworker kept friends and family updated on her progress.

Her eyes were on the road and the gas gauge that kept getting nearer to empty, but her heart and fears were with her children. Matt had been able to get in touch with the daycare who confirmed they were safe and teachers were staying with children until parents arrived. This relieved some anxiety, but not her compelling need to get them.

“The fact that I couldn’t physically get to them was hard,” said Jen. “It was a strangely overpowering emotion that I never, ever want to experience again.”

Literally and figuratively running on fumes, she pulled into a gas station half a mile from her home around midnight. The station was out of gas, but the bridge ahead was frozen over so she decided to walk.

She bundled up in every spare glove and child’s scarf she could find in her car and began walking…in her black, 4 inch-pump heels.

She reached her front door, stopping just long enough to change her shoes and put on a fresh layer of warmer clothing.

Physically safe at home, she was not emotionally safe. She could not rest until her children were with her.

“The whole world felt like it was turning into chaos,” said Jen. “The roads were getting worse, not better. If I didn’t get them now, I didn’t know when I could get them. I just couldn’t rest until I had them in my arms.”

Stepping out of the front door, she ran into her neighbor, Josh, who quickly volunteered to make the 3 mile trek to daycare to retrieve her two children in the 14 degree weather. The two adults walked and jogged through the streets, past cars of sleeping drivers and occasionally dodging a car sliding off the ice-coated road.

They arrived at daycare at 1:30 am and Jen felt the relief of holding her children in her arms. Jen and Josh bundled the children up, borrowing from the “lost and found.” Jennifer snuggled up Libby, her 18 pound daughter while Josh grabbed Grant, her 31 pound son.

Wishing to avoid the roads and the out of control cars, they took a route home along a park trail. Surrounded by silence and snow-covered trees, her sleepy and disoriented children struggled and cried as Jennifer and Josh jogged, juggling a child from one arm to another.

“The hike home was hard, but not as hard as trying to get to them,” said Jen. “I could make them warm. Walk faster. Run. I could take care of them and get them to a safe place as long as we were together.”

They arrived home at 3 a.m. Sixteen hours after leaving work, 6 miles of walking in the snow, countless blisters on her feet, and arms so sore she wouldn’t be able to lift them above her head for days. Jen could finally rest.

“I collapsed on the kitchen floor hugging both children and finally let myself cry,” said Jen. “My son asked what was wrong to which I responded, I’m just happy we’re all together.”