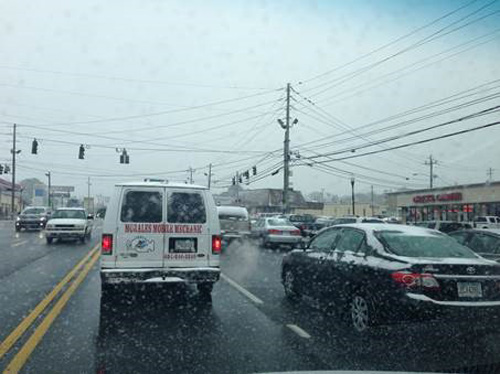 Some of the bumper-to-bumper traffic Diane faced to get home.

Emergencies inspire big images. Rapidly rising water. Roaring fires. Thundering clouds. And similarly dramatic rescues. Buzzing helicopters. Dramatic escapes in the middle of the night. But instead of “big,” momentous events, Diane found her emergency and response as a series of small decisions. Each decision adding to the other, causing both a scary situation and saving herself from it.

The first sign of trouble came from an insistently buzzing phone. “It’s snowing already,” the phone announced via text. Followed soon by “Come home now. Roads are getting bad.” Diane and her colleagues had spent the morning cooped up in her supervisor’s office. They’d been planning this meeting for months and were focused on the day’s agenda.

The phone’s owner took its advice, along with many others in the office. Diane and a few colleagues stayed to finish the meeting. She had lived in the northeast and was comfortable driving in snow. Plus, weather forecasts didn’t call for snow to be that heavy in Atlanta – schools were still open.

Staying at work became the first small decision she would regret.

Diane’s first look at the situation she faced came around 2 p.m. “I looked out the window of our building onto the highway and knew immediately – I was in trouble.”

Her commute moved in slow motion. Diane tried taking surface streets instead of the highway. With many possible routes, each road became a decision point “Do I keep going this way or try another.” She had plenty of time to think about each option as she and the cars around her moved at a snail’s pace – or not at all.

As it turned to late afternoon, Diane checked on her kids coming home from school. Her oldest daughter had been able to take the bus home from the high school, but then she heard from her 12-year-old daughter, Maya. Schools had released early, but buses for her daughter’s middle school hadn’t arrived yet to pick them up. “Mom – the buses aren’t here yet. Can you come get me?” Diane realized the buses were likely experiencing the same traffic and were unlikely get the middle school kids home before night. But both she and her husband were stranded on the road and unable to help Maya. “No honey, I can’t.”

Hanging up the phone, she called her neighbor “Could you pick up Maya at school?” she asked. “I’m here right now, picking up my own daughter,” her neighbor responded. “I’ll take her home and keep both girls at my house until you get here.”

Diane gave thanks for her strong relationship with her neighbors and for another small decision that helped her protect her children during the emergency: keeping a phone charger in the car. Her phone not only helped her find a safe way home for her family, but it was also her best source of real-time information on road conditions as she sat in her unmoving car.

“Facebook kept me updated on the roads ahead and connected with friends,” shared Diane. “It helped keep me from feeling too alone, even though I was the only one in the car.”

As afternoon turned to evening, Diane made a dinner of her lunch leftovers and a few bottles of water she had with her. Bringing food and water was another small decision that helped get her through the day, along with filling up her gas tank that morning.

Evening turned to night and traffic-clogged roads turned to ice beneath the cars. Even worse, the bridges Diane had to cross to get home turned into skating rinks, with one car at a time attempting to venture across.

“I considered stopping many times during the night,” Diane shared. “Every time I hit a hill or a street or another standstill of traffic, I had to weigh whether I should park my car and walk, sleep in my car, or keep driving. There were constant decision points. I was on my own and concerned if I slipped on the ice and fell that I might not be found until morning. I didn’t want to start walking too far from home.

Using her experiences driving in winter weather in the northeast and her minivan, she managed to navigate icy hills and side streets that stranded others before she finally hit a hill even she could not pass. At 4 am she was still three miles from home.

She made the final decision to walk the rest of the way. Thankfully, she was dressed for the cold. That morning, she had thrown sturdy shoes, a down jacket and raincoat in her car – just in case. Another small decision that would make a big difference. 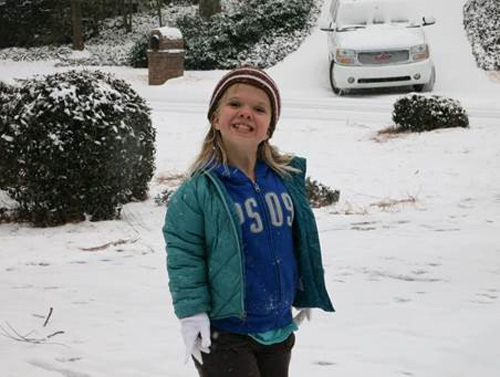 Diane’s daughter, Maya, plays in the snow safely at a neighbor's home.

At 5 a.m., 15 hours after leaving the office, Diane walked through her front door – feeling cold, but safe.