During an emergency, you may have questions like, “Why is this happening?” or “What now?” Natural and chemical disasters can be even harder to explain to your child, especially if he or she has a developmental disability. Involving your children in emergency planning and finding ways to explain an emergency can help them understand and cope. 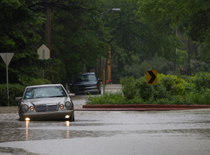 A major flood swept through Cathy’s town, resulting in 4,000 homes and businesses being destroyed, unclean public water, limited access to local food, and displaced individuals with developmental disabilities. Cathy’s daughter, Sara, was one of the individuals displaced. She was able to leave her assisted living facility to be cared for by her family until the flooding ended. During this time, Cathy found it difficult to explain to Sara what was happening to them, to their neighbors, and to the larger community. “I had no resource other than radio, TV, and Facebook to help my daughter understand what had happened. Those items were helpful, but not concrete enough for her,” she says.

Cathy found a way to explain to Sara how the flooding was affecting everyone around them. She took Sara to the areas where stores and businesses had been flooded and also visited friends whose homes were flooded. Each of these things “did more to show her what was happening,” says Cathy.

Parents should talk to their children about planning for natural disasters and involve them in planning, if possible. If an emergency occurs, take children to see the effects of the disaster to help them understand and cope with the situation. Visit the following sites for more information about what to do before and after an emergency.