Keep Calm and Sing On: Trapped on the Road with a Preschooler and Infant Twins 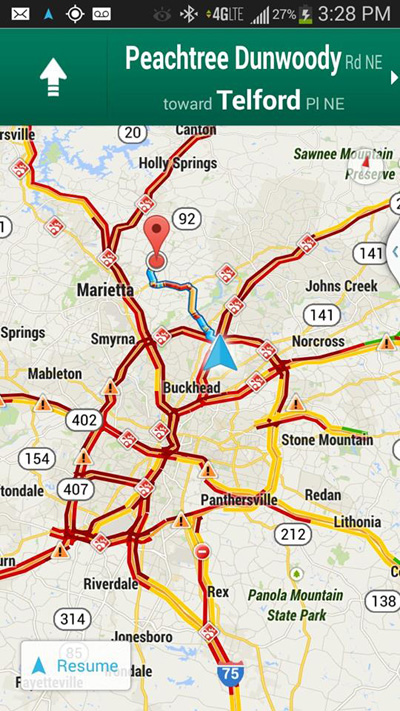 More than three hours into her drive and Kelly still faced a series of “red” roads. Image: Google Maps

Emergencies don’t just affect people physically, but also mentally and emotionally. Trapped on the road with a preschooler and infant twins, Kelly worked to protect her family from the physical dangers and fear from the scary world outside their car.

It was 4 p.m. and Kelly had been on the road for four hours. She was only a few miles from her work and many more miles from home. Her rearview mirror showed a backseat full of children – 5-year-old Savannah, and her 9-month-old twins Caden and Kylie.

She had left work at noon that day to pick up her children due to the start of a winter storm in the Atlanta metropolitan area. Kelly was a kindergarten teacher at the same school her children attended, so it had been easy to pick up them up. After grabbing their jackets and bags, she fastened them in their car seats and hit the road.

Kelly’s mind raced – they were nowhere near home. The twins would be hungry soon and she only had one bottle for each child. She only had two diapers left and both her twins were overdue for a diaper change. Although she was getting anxious, she knew she could not let her children sense her fear.

So instead, she and Savannah played “Frozen” – pretending Elsa was freezing the road around them and singing “Let it Go” on repeat. The twins woke up from their afternoon nap and played along with “oohs” and “ahhhs.”

As the hours passed, the trip began to get scarier. They watched as cars slid out of control on the icy road, off the road and into each other. More than once, Kelly gripped the wheel as a car got dangerously close to her family’s car.

“Why is that lady crying?” asked Savannah. “Are we going to get stuck?” She and Kelly talked about snow, ice, and how scary things can happen.

“When scary things happen, we try to help other people,” Kelly told her daughter as they began a new game of looking for people helping each other. They didn’t have to look far. Commuters helped push stuck cars off the road. They turned onto a more residential street around 9 p.m. to find people walking with wagons full of supplies, handing bottles of water and packages of food to the stranded motorists.

Several offered her and her children a place to stay, as did friends of friends who were following her on Facebook. Kelly declined the offers. They were still making progress. Her children had dozed off and she was focused on getting them home to fresh diapers and more baby food.

At 10:30 p.m. she made it to the final bridge before home. She was the next car in line to cross the bridge when a police officer stopped her. They had closed the bridge. A truck trying to pass had slipped back and hit cars. The bridge was not safe.

She asked him for advice on how she could get home. “He looked at me with the saddest look and said ‘I’m sorry ma’am. You’re not getting home tonight,’” Kelly remembered. 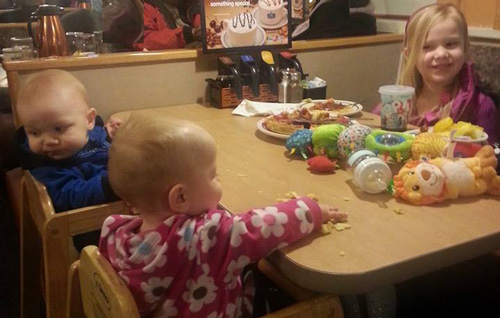 Savannah, Caden, and Kylie enjoy breakfast after their night sleeping in the car.

A Night on the Road

Kelly’s husband, Jon, began calling hotels. Every single hotel was booked, even their lobbies were full of people. Kelly turned around and crawled back down the road, looking for a safe place to spend the night. Around 2 a.m. she pulled into a parking lot and let Savannah come to the front seat to sleep on her lap.

Kelly wished away the minutes, texting with her husband. He too had become stuck on the roads in an effort to find his family. Her full tank of gas allowed her to keep the heat running and her phone charged. “I kept worrying the babies would wake up hungry or needing a new diaper,” said Kelly. “I’m so grateful they slept and stayed calm – and didn’t poop!”

An Extra Special Breakfast and a Shopping Spree

Around 5 a.m. the babies began to wake and Kelly knew she needed to get them somewhere with fresh diapers and food. She spied an open breakfast restaurant. She carried two car seats inside, where the whole family devoured pancakes.

With diapers as the next priority, she found a grocery store with its lights on. A lobby full of stranded motorists waved her inside. “The store manager, had pastries, juice, and water out for everyone,” she shared. “I asked him if I could please buy diapers for the babies. He said the registers were closed and he couldn’t sell anything, but instead took me to the baby aisle and told me to get whatever I needed.” 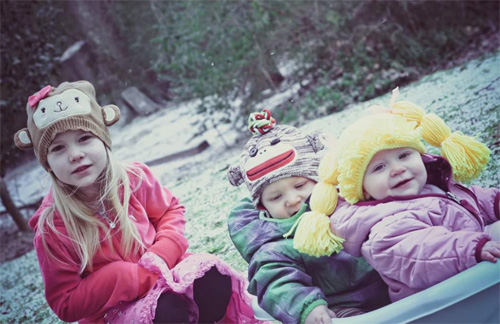 Savannah, Caden, and Kylie play in the snow after they arrived home.

Police and her husband arrived around 7:30 in the morning, sharing news that the bridge had reopened. The family got in his car and drove the last few miles home.

Getting ready for bed the next night, safely at home in their warm house, Savannah asked “Can we sleep in the car again?”

“Not tonight,” said her mommy. “We’re not sleeping in the car tonight.”