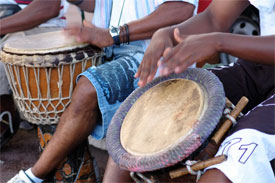 The risk of developing anthrax from handling an animal hide drum is considered to be very low. However, there have been cases of people getting sick with anthrax after handling animal hide drums in the United States and other parts of the world.

The first documented case of anthrax linked to a hide drum in the United States was in Florida in 1974. A single case of cutaneous anthrax was associated with a goat hide bongo drum purchased in Haiti, where anthrax is common.

Another fatal case of inhalation anthrax occurred in Scotland in 2006. The patient, who may have had increased susceptibility to infectious diseases, became sick as a result of using or handling contaminated hide drums from West Africa.

The risk of being exposed to anthrax spores by attending drumming events is also considered to be very low. While a recent case of gastrointestinal anthrax was identified in a person who attended an indoor drumming event, this case is still currently under investigation and the way the person became infected with anthrax has not been determined.

If you are an animal hide drum owner or player, or if you recently attended a drumming event and are experiencing any symptoms that resemble anthrax, you should get medical care as soon as possible. It is important to talk to your provider about any recent contact you’ve had with animal hide drums.

The best way to ensure that drums are not made with contaminated hides is to be sure the hides came from:

Animal hides are not allowed to enter the United States unless they have been treated to make them less likely to spread disease. People who make or play animal hide drums should mention these activities to their doctor if they develop a fever or skin lesions.

No tests are available to determine if animal products are free from contamination with anthrax spores. Be sure that any hide used to make a drum has been removed and processed according to existing government regulations.