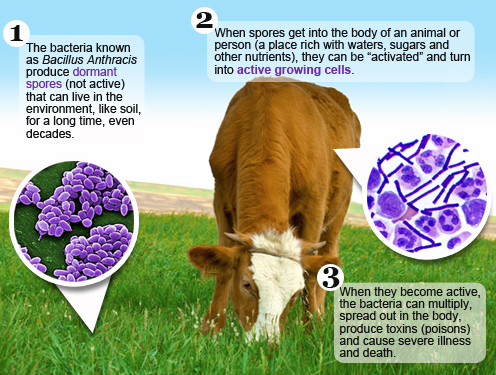 Anthrax is a serious infectious disease caused by gram-positive, rod-shaped bacteria known as Bacillus anthracis. Anthrax can be found naturally in soil and commonly affects domestic and wild animals around the world. Although it is rare in the United States, people can get sick with anthrax if they come in contact with infected animals or contaminated animal products. Contact with anthrax can cause severe illness in both humans and animals.

Anthrax is not contagious, which means you can’t catch it like the cold or flu.

How do animals get infected with anthrax?

Domestic and wild animals such as cattle, sheep, goats, antelope, and deer can become infected when they breathe in or ingest spores in contaminated soil, plants, or water. In areas where domestic animals have had anthrax in the past, routine vaccination can help prevent outbreaks.

How do people get infected with anthrax?

People get infected with anthrax when spores get into the body. When anthrax spores get inside the body, they can be “activated.” When they become active, the bacteria can multiply, spread out in the body, produce toxins (poisons), and cause severe illness.

This can happen when people breathe in spores, eat food or drink water that is contaminated with spores, or get spores in a cut or scrape in the skin. It is very uncommon for people in the United States to get infected with anthrax.

Certain activities can also increase a person’s chances of getting infected. For more information, see How People Are Infected.

Where is anthrax found?

Anthrax is most common in agricultural regions of Central and South America, sub-Saharan Africa, central and southwestern Asia, southern and eastern Europe, and the Caribbean.

Anthrax is rare in the United States, but sporadic outbreaks do occur in wild and domestic grazing animals such as cattle or deer. Anthrax is more common in developing countries and countries that do not have veterinary public health programs that routinely vaccinate animals against anthrax. In the United States, yearly vaccination of livestock is recommended in areas where animals have had anthrax in the past. For more information, see Travelers.