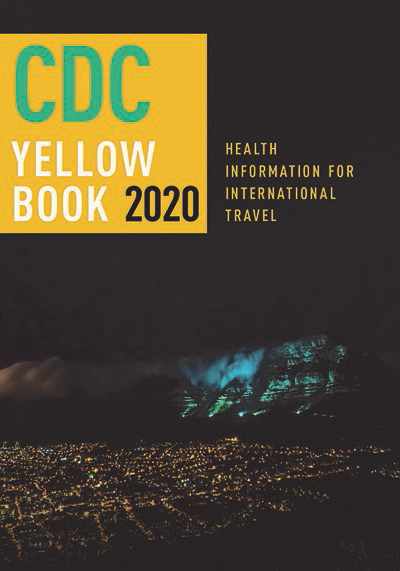 CDC’s Traveler’s Health site has information you can use to help your patients have a healthy trip, including: 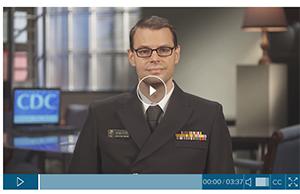 In this video, which is part of the CDC Expert Commentary Series on Medscapeexternal icon, Dr. Kevin Chatham-Stephens discusses drug-resistant typhoid fever, vaccination, and treatment options. 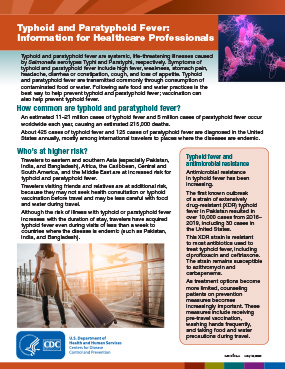 Read the Typhoid and Paratyphoid Fever Factsheet for Healthcare Professionals pdf icon[PDF – 534 KB] to get more information about risk, diagnosis, treatment, and prevention.

Typhoid fever and paratyphoid fever are bacteremic illnesses that have an insidious onset characterized by fever, headache, constipation or diarrhea, malaise, chills, and myalgias, with few clinical features that reliably distinguish them from a variety of other infectious diseases. Diarrhea may occur, and vomiting is not usually severe. A transient, maculopapular rash of rose-colored spots may be present on the trunk. Confusion, delirium, and intestinal perforation may occur in severe cases, typically after 2 to 3 weeks of illness. The incubation period for typhoid fever is typically 6 to 30 days, and 1 to 10 days for paratyphoid fever.

Blood culture is the mainstay of diagnosis. Bone marrow cultures have sensitivity of 80% in some studies and can remain positive despite antibiotic therapy. Stool and urine cultures are positive less frequently. Multiple cultures are usually needed to identify the pathogen. Serologic tests, such as the Widal test, are not recommended because of the high rate of false positives.

Antimicrobial resistance in typhoid fever has been increasing. Most typhoid and paratyphoid fever infections diagnosed in the United States are caused by strains not susceptible to fluoroquinolones. Therefore, do not use fluoroquinolones for empiric treatment while awaiting susceptibility results. Patients who have traveled to Pakistan should be treated with azithromycin for uncomplicated suspected typhoid fever and carbapenems for severe or complicated disease. Treatment can be adjusted when culture and sensitivity results are available.

U.S. estimates
An estimated 5,700 infections of Salmonella Typhi occur among people in the United States each year; an estimated 620 of these people are hospitalized. CDC has not made estimates for Salmonella Paratyphi.

Diagnosed cases
In the United States, about 350 patients are diagnosed with typhoid fever and 90 patients are diagnosed with paratyphoid fever annually. Most illnesses are in people who report recent travel to countries where the diseases are common, such as India, Bangladesh, and Pakistan. These cases do not account for people who do not seek medical care, who are not tested for either disease, or whose disease is not reported to CDC.

Without therapy, the illness can last for 3 to 4 weeks and death rates range between 12% and 30%. Relapse occurs in up to 10% of untreated patients approximately 1 to 3 weeks after recovering from the initial illness and is often milder than the initial illness. A chronic carrier state, in which stool or urine cultures for Salmonella Typhi remain positive for more than one year, occurs in up to 5% of infected people.

Risk is very low in the United States, higher among international travelers, and highest among people living in places with poor sanitation and hygiene. Most typhoid fever and paratyphoid fever patients in the United States report international travel in the 30 days before their illness; most of these patients traveled to Southern Asia (e.g., India, Bangladesh, Pakistan).

Reduced susceptibility to fluoroquinolones (e.g., ciprofloxacin) and the emergence of multidrug resistance has complicated treatment of infections, especially those acquired in South Asia. There have been reports of  sporadic ceftriaxone-resistant Salmonella Typhi infections and at least one documented outbreak. An outbreak of extensively drug-resistant typhoid fever in Pakistan is ongoing.

Guidelines for Submitting a Specimen to CDC