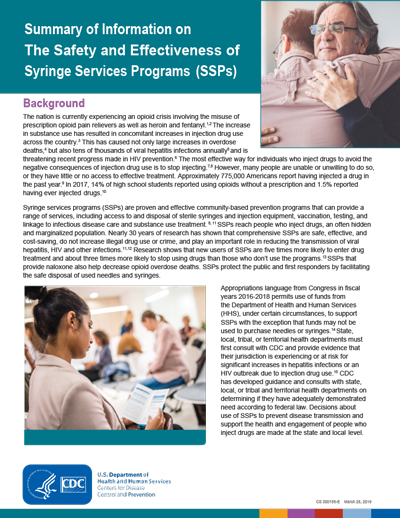 The nation is currently experiencing an opioid crisis involving the misuse of prescription opioid pain relievers as well as heroin and fentanyl.1,2 The increase in substance use has resulted in concomitant increases in injection drug use across the country.3 This has caused not only large increases in overdose deaths,4 but also tens of thousands of viral hepatitis infections annually5 and is threatening recent progress made in HIV prevention.6 The most effective way for individuals who inject drugs to avoid the negative consequences of injection drug use is to stop injecting.7,8 However, many people are unable or unwilling to do so, or they have little or no access to effective treatment. Approximately 775,000 Americans report having injected a drug in the past year.9 In 2017, 14% of high school students reported using opioids without a prescription and 1.5% reported having ever injected drugs.10

Syringe services programs (SSPs) are proven and effective community-based prevention programs that can provide a range of services, including access to and disposal of sterile syringes and injection equipment, vaccination, testing, and linkage to infectious disease care and substance use treatment. 8, 11 SSPs reach people who inject drugs, an often hidden and marginalized population. Nearly 30 years of research has shown that comprehensive SSPs are safe, effective, and cost-saving, do not increase illegal drug use or crime, and play an important role in reducing the transmission of viral hepatitis, HIV and other infections.11,12 Research shows that new users of SSPs are five times more likely to enter drug treatment and about three times more likely to stop using drugs than those who don’t use the programs.13 SSPs that provide naloxone also help decrease opioid overdose deaths. SSPs protect the public and first responders by facilitating the safe disposal of used needles and syringes.

Appropriations language from Congress in fiscal years 2016-2018 permits use of funds from the Department of Health and Human Services (HHS), under certain circumstances, to support SSPs with the exception that funds may not be used to purchase needles or syringes.14 State, local, tribal, or territorial health departments must first consult with CDC and provide evidence that their jurisdiction is experiencing or at risk for significant increases in hepatitis infections or an HIV outbreak due to injection drug use.15 CDC has developed guidance and consults with state, local, or tribal and territorial health departments on determining if they have adequately demonstrated need according to federal law. Decisions about use of SSPs to prevent disease transmission and support the health and engagement of people who inject drugs are made at the state and local level.

Viral hepatitis, HIV, and other blood-borne pathogens can spread through injection drug use if people use needles, syringes, or other injection materials that were previously used by someone who had one of these infections. Injecting drugs can also lead to other serious health problems, such as skin infections, abscesses and endocarditis. The best way to reduce the risk of acquiring and transmitting disease through injection drug use is to stop injecting drugs. For people who do not stop injecting drugs, using sterile injection equipment for each injection can reduce the risk of infection and prevent outbreaks.

During the last decade, the United States has seen an increase in injection drug use — primarily the injection of opioids. Outbreaks of hepatitis C, hepatitis B and HIV infections have been correlated with these injection patterns and trends.16,17 The majority of new hepatitis C virus (HCV) infections are due to injection drug use, and the nation has seen a 3.5-fold increase in reported cases of HCV from 2010 to 2016, reaching a 15- year high.5 New HCV virus infections are increasing most rapidly among young people, with the greatest incidence among individuals under 30.

Until recently, CDC had observed a steady decline since the mid-1990s in HIV diagnoses attributable to injection drug use. However, recent data show progress has stalled. Notably, new HIV infections among white people who inject drugs, the group most affected by the expanding opioid epidemic, increased 10% from 2014 to 2015.18 The estimated lifetime cost of treating one person living with HIV is near $450,000.19 Hospitalization in the US due to substance- use related infections alone costs over $700 million annually.20 In the United States, the estimated cost of providing health care services for people living with chronic HCV infection is $15 billion annually.21 SSPs can help reduce these healthcare costs by preventing viral hepatitis, HIV, endocarditis and other infections.

SSPs are a tool that can help reduce transmission of viral hepatitis, HIV, and other blood-borne infections. SSPs are associated with an approximately 50% reduction in HIV and HCV incidence.11 When combined with medications that treat opioid dependence (also known as medication-assisted treatment) HIV and HCV transmission is reduced by more than two-thirds.22,23

Top of Page
Linkage to Substance Use Treatment, Naloxone, and Other Healthcare Services

Syringe services programs serve as a bridge to other health services including, HCV and HIV diagnosis and treatment and MAT for substance use.24 The majority of SSPs offer referrals to MAT,25 and people who inject drugs who regularly use an SSP are more than five times as likely to enter treatment for a substance use disorder and nearly three times as likely to report reducing or discontinuing injection as those who have never used an SSP.13,26,27 SSPs facilitate entry into treatment for substance use disorders by people who inject drugs.26,28 People who use SSPs show high readiness to reduce or stop their drug use.29 There is also evidence that people who inject drugs who work with a nurse at an SSP or other community-based venue are more likely to access primary care than those who don’t,36 also increasing access to MAT.30 Many comprehensive community-based SSPs offer a range of preventative services including vaccination, infectious disease testing, and linkage to healthcare services.

Syringe services programs can benefit communities and public safety by reducing needlestick injuries and overdose deaths, without increasing illegal injection of drugs or criminal activity. Studies show that SSPs protect first responders and the public by providing safe needle disposal and reducing community presence of needles.34–38 As many as one in every three officers may be stuck by a used needle during his or her career.39 Needle stick injuries are among the most concerning and stressful events experienced by law officers.40,41 A study compared the prevalence of improperly disposed of syringes and self-reported disposal practices in a city with SSPs (San Francisco) to a city without SSPs (Miami) and found eight times as many improperly disposed of syringes in Miami, the city without SSPs.34 People who inject drugs in San Francisco also reported higher rates of safe disposal practices than those in Miami. Data from CDC’s National HIV Behavioral Surveillance system in 2015 showed that the more syringes distributed at SSPs per people who inject drugs in a geographic region, the more likely people who inject drugs in that region were to report safe disposal of used syringes.42

Evidence demonstrates that SSPs do not increase illegal drug use or crime.43,44 Studies in Baltimore44 and New York City43 have found no difference in crime rates between areas with and areas without SSPs. In Baltimore, trends in arrests were examined before and after a SSP was opened and found that there was not a significant increase in crime rates. The study in New York City assessed whether proximity to an SSP was associated with experiencing violence in an inner city neighborhood and found no association.

Not all SSPs are alike. Programs differ in size, scope, geographic location, and delivery venue (e.g., mobile vs. fixed sites). Community acceptance and legality also impact program success. Prior to establishing an SSP, it is important for public health agencies (or others) to assess the needs of potential clients, their families, key stakeholders, law enforcement, and the community at large.

The decision to incorporate SSPs as part of a comprehensive prevention program is made at the state and local level. Laws vary by state and can either increase or reduce access to SSPs. CDC created a guidance document to aid state and local health departments in managing HIV and hepatitis C outbreaks among people who inject drugs, which provides best practices to consider when establishing an SSP.45 Conducting a needs assessment prior to the establishment of an SSP, developing evaluation tools, and careful planning of the operational tasks can increase the chances the SSP will be successful in a community.

HHS guidance states that SSPs should be part of a comprehensive service program that includes, as appropriate,46

In addition to the concerning increases in hepatitis and HIV rates, CDC has also identified additional emerging infectious disease risks related to injection drug use, including increases in methicillin-resistant Staphylococcus aureus (MRSA) infection rates, which increased 124% between 2011 and 2016 among people who inject drugs.47 In addition, people who inject drugs are 16 times as likely as other people to develop invasive MRSA infections.

Rates of endocarditis, a life-threatening infection of the heart valves that can occur in people who inject drugs, has also increased. For example, in North Carolina alone, the rate of hospital discharge diagnoses for endocarditis related to drug dependence increased more than 12-fold from 2010 to 2015, with unadjusted hospital costs increasing from $1.1 million in 2010 to over $22 million in 2015.48 Identifying and responding to these emerging infectious disease threats is critical to alleviate the subsequent harms of opioid misuse and abuse. These infections have been linked to frequency of injecting and to syringe sharing.49 SSPs may help reduce bacterial infections by providing sterile injection equipment and linkage to substance use treatment.