On This Page
What is an SSP? 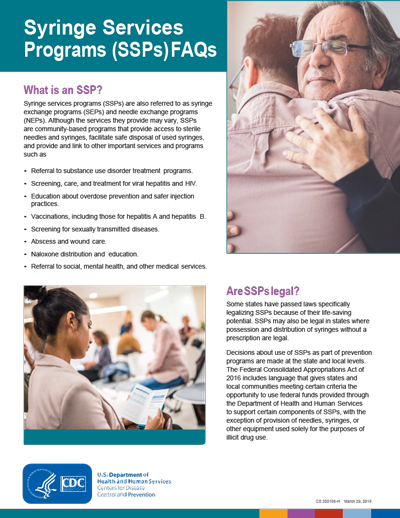 Some states have passed laws specifically legalizing SSPs because of their life-saving potential. SSPs may also be legal in states where possession and distribution of syringes without a prescription are legal.

Decisions about use of SSPs as part of prevention programs are made at the state and local levels. The Federal Consolidated Appropriations Act of 2016 includes language that gives states and local communities meeting certain criteria the opportunity to use federal funds provided through the Department of Health and Human Services to support certain components of SSPs, with the exception of provision of needles, syringes, or other equipment used solely for the purposes of illicit drug use.

Yes. When people who inject drugs use an SSP, they are more likely to enter treatment for substance use disorder and stop injecting than those who don’t use an SSP.1,2,3,4 New users of SSPs are five times as likely to enter drug treatment as those who don’t use the programs. People who inject drugs and who have used an SSP regularly are nearly three times as likely to report a reduction in injection frequency as those who have never used an SSP.2

Yes. Nonsterile injections can lead to transmission of HIV, viral hepatitis, bacterial, and fungal infections and other complications. By providing access to sterile syringes and other injection equipment, SSPs help people prevent transmitting bloodborne and other infections when they inject drugs. In addition to being at risk for HIV, viral hepatitis, and other blood-borne and sexually transmitted diseases, people who inject drugs can get other serious, life-threatening, and costly health problems, such as infections of the heart valves (endocarditis), serious skin infections, and deep tissue abscesses. Access to sterile injection equipment can help prevent these infections, and health care provided at SSPs can catch these problems early and provide easy-to-access treatment to a population that may be reluctant to go to a hospital or seek other medical care.5,6,7

Top of Page
Do SSPs cause more needles in public places?

No. Studies show that SSPs protect the public and first responders by providing safe needle disposal and reducing the presence of needles in the community.8,9,10,11,12,13

Do SSPs lead to more crime and/or drug use?

Yes. SSPs reduce health care costs by preventing HIV, viral hepatitis, and other infections, including endocarditis, a life-threatening heart valve infection. The estimated lifetime cost of treating one person living with HIV is more than $450,000.16 Hospitalizations in the U.S. for substance-use-related infections cost over $700 million each year.17 SSPs reduce these costs and help link people to treatment to stop using drugs.

Do SSPs reduce drug use and drug overdoses?

SSPs help people overcome substance use disorders. If people who inject drugs use an SSP, they are more likely to enter treatment for substance use disorder and reduce or stop injecting.1,2,3,4 A Seattle study found that new users of SSPs were five times as likely to enter drug treatment as those who didn’t use the programs.2 People who inject drugs and who have used an SSP regularly are nearly three times as likely to report reducing or stopping illicit drug injection as those who have never used an SSP.2 SSPs play a key role in preventing overdose deaths by training people who inject drugs how to prevent, rapidly recognize, and reverse opioid overdoses. Specifically, many SSPs give clients and community members “overdose rescue kits” and teach them how to identify an overdose, give rescue breathing, and administer naloxone, a medication used to reverse overdose.18,19,20,21,22,23