Naegleria fowleri is a free-living ameba that causes primary amebic meningoencephalitis (PAM), a disease of the central nervous system 1, 2. PAM is a rare disease* that is almost always fatal. In the United States**, there have been 148 PAM infections from 1962 through 2019 with only four survivors. These infections have primarily occurred in 15 southern-tier states, with more than half of all infections occurring in Texas and Florida. PAM also disproportionately affects males and children. The reason for this distribution pattern is unclear but may reflect the types of water activities (such as diving or watersports) that might be more common among young boys 3.

For figures and tables representing information on cases of PAM that occurred from 1962 – 2019, visit Publications, Data, & Statistics.

Naegleria fowleri is a heat-loving (thermophilic) ameba found around the world 1, 2. Naegleria fowleri grows best at higher temperatures up to 115°F (46°C; see Pathogen and Environment page) and can survive for short periods at higher temperatures 3, 4. Naegleria fowleri is naturally found in warm freshwater environments such as lakes and rivers 5-9, naturally hot (geothermal) water such as hot springs 10, warm water discharge from industrial or power plants 11, 12, geothermal well water 13, 14, poorly maintained or minimally chlorinated swimming pools 15, water heaters 16, and soil 5, where it lives by feeding on bacteria and other microbes in the environment. Sampling of lakes in the southern tier of the U.S. indicates that Naegleria fowleri is commonly present in many southern tier lakes in the U.S. during the summer 5-9 but infections have also recently occurred in northern states 17. Naegleria is not found in salt water, like the ocean. 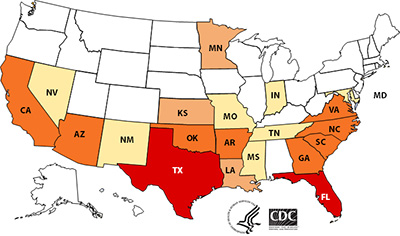 PAM infections have been reported from around the world 1, 2. Infections have primarily occurred in southern-tier states in the U.S. 3, but infections were documented in Minnesota in 2010 and 2012 4 and other northern states since that time. Over half of all reported infections have occurred in Florida and Texas. In the United States and the rest of the world, PAM is primarily spread via swimming in warm freshwater lakes and rivers (about 3 out of 4 U.S. infections from 1962-2019) 3. Other recreational water types like hot springs and canals have also been linked to PAM infections 3.

Six infections in the U.S. have been associated with using water from drinking water systems to swim 5 or use a slip-n-slide 6, immerse the head in a bathtub 5,  mix solutions for nasal irrigation using a neti pot 7, or perform ritual nasal rinsing or ablution 8. PAM infections also occurred in the 1970s and 1980s in Australia 9, 10 that were linked to showering, swimming, or having other nasal exposure to contaminated drinking water. The infections were linked to piping drinking water overland, sometimes for hundreds of kilometers, that resulted in the water being heated and having low to zero disinfectant levels that resulted in the water and pipes becoming colonized by Naegleria fowleri. Several water systems in the states of Western Australia and South Australia continue to monitor regularly for Naegleria fowleri colonization in drinking water distribution systems 11. Infections due to contaminated water being used for religious practices 8, 12 have also been reported.

PAM is a rare* disease. From 1962-2019, 148 infections in the U.S. have been reported to CDC. Other infections have been diagnosed in stored autopsy samples dating back to 1937 1. The annual number of U.S. infections ranges from 0 to 8, with higher numbers appearing to occur in heat wave years when air and water temperatures are higher. It does not appear that the number of infections has increased since CDC established its Free-living Ameba (FLA) Laboratory and PAM registry in 1978.

Humans become infected when water containing Naegleria fowleri enters the nose, usually while swimming. People do not get infected by drinking contaminated water. The ameba migrates to the brain along the olfactory nerve, through a bony plate in the skull called the cribriform plate, where it reaches the brain and begins to destroy the brain tissue 1, 2. Naegleria fowleri has not been shown to spread via water vapor or aerosol droplets (such as shower mist or vapor generated from a humidifier). The ameba has never been shown to have spread from one person to another.

Naegleria fowleri has also been documented to infect animals such as cattle 4 and a South American tapir 5. Experimental infection can be induced in other species including mice, which are used as the model system for studying Naegleria fowleri infections resulting from swimming 6.

No data exist to accurately estimate the true risk of PAM. Hundreds of millions of visits to swimming venues occur each year in the U.S. 1 that result in 0-8 infections per year. The extremely low occurrence of PAM makes epidemiologic study difficult. It is unknown why certain persons become infected with the amebae while millions of others exposed to warm recreational fresh waters, including those who were swimming with people who became infected, do not. Attempts have been made to determine what concentration of Naegleria fowleri in the environment poses an unacceptable risk 2. However, no method currently exists that accurately and reproducibly measures the numbers of amebae in the water. This makes it unclear how a standard might be set to protect human health and how public health officials would measure and enforce such a standard.

**Including U.S. states, territories, and commonwealths.