Photos and Video of Naegleria fowleri

Learn more about the appearance of Naegleria fowleri on the Photos page. 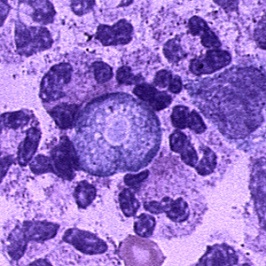 Trophozoite of Naegleria fowleri in CSF, stained with H&E.

Additionally, Naegleria can be identified in CSF smears or cultures using hematoxylin and eosin (H&E), periodic acid-Schiff (PAS), trichrome, Giemsa, or Wright-Giemsa stains. A Gram stain should be avoided, as the amebae can be destroyed during heat fixation. A stained CSF smear will show ameboid trophozoites with morphology typical of Naegleria (i.e., a nucleus with a large, centrally located and densely staining nucleolus). If amebae are identified in the CSF, the diagnosis of PAM should be subsequently confirmed with polymerase chain reaction (PCR). 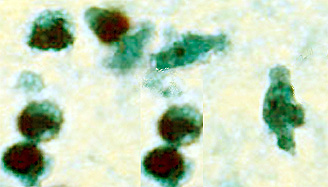 The diagnosis can also be made from microscopic examination of hematoxylin and eosin, periodic acid-Schiff, trichrome, Giemsa, or Wright-Giemsa-stained smears of brain biopsy or autopsy specimens, which might demonstrate trophozoites with morphology typical of Naegleria fowleri. The ameboid trophozoites measure 10-35 µm but when rounded are usually 10-15 µm in diameter. The cytoplasm is granular and contains many vacuoles. The single nucleus is large and has a large, dense karyosome. Naegleria fowleri does not form cysts in human tissues.

For microscopy images of Naegleria fowleri, visit the Photos page. 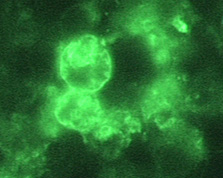 Serologic testing for Naegleria fowleri using indirect immunofluorescent antibody (IFA) to measure serum antibody titers in patient sera has little diagnostic value, because most patients with PAM die before an immune response is mounted. However, a California PAM survivor did exhibit a serologic response.

Specific molecular tools can amplify DNA from the amebae in CSF or tissue to specifically identify if the amebae are present. DNA has been successfully amplified from CSF and unfixed tissue samples. Typing of isolates can be done, but little is known about the natural populations to put these data in a biological context. An increasing number of PCR-based techniques (conventional and real-time PCR) have been described for detection and identification of free-living amebic infections in clinical specimens, but are only available in selected reference diagnostic laboratories. A real-time PCR was developed at CDC for qualitative assessment of Naegleria fowleri, Acanthamoeba spp., and Balamuthia mandrillaris in clinical samples. This assay uses distinct primers and TaqMan probes for the simultaneous identification of all three free-living amebae. Strains or subtypes of Naegleria fowleri can be looked at, but little is known about the natural populations in the environment, which makes it difficult to interpret the findings. Nevertheless, subtyping can help identify the environmental exposure of Naegleria fowleri in PAM patients. Recently, next-generation sequencing has also been used in the diagnosis of a PAM case.

Culture procedure may be used to identify free-living amebae in clinical and environmental specimens. It involves inoculating mammalian cell cultures and monitoring for cytopathogenicity or growth on E. coli lawns. For growing on an E. coli lawn, the sample is added to a growth plate covered in bacteria that can serve as a food source for Naegleria fowleri. The initial screening is accomplished by incubating the plate at a higher temperature (108°F/42°C) that kills most free-living amebae, while selecting for thermophilic amebae, such as Naegleria fowleri or other amebae. This initial screen shows up as tracks made by an ameba as it moves across the plate eating the bacteria. If there are no amebae on the plate grown at the higher temperature, then Naegleria fowleri is not present. If thermophilic amebae are present on the plate grown at the higher temperature, then these amebae undergo further specific testing to determine whether Naegleria fowleri is present since other thermophilic free-living amebae could be present. (NOTE: Amebae, including thermophilic amebae other than Naegleria fowleri, can be common in water systems, but none of these other amebae cause PAM.) Naegleria can be specifically identified in cultures from clinical specimens using hematoxylin and eosin (H&E), periodic acid-Schiff (PAS), trichrome, Giemsa, or Wright-Giemsa stains. Stained cultures might demonstrate trophozoites with morphology typical of Naegleria fowleri, as previously described. In culture, trophozoites may measure more than 40 µm. A negative culture result does not rule out the presence of free-living amebae, and other tests should be performed.

Clinical Specimens for Diagnosis at CDC

If possible, CDC requests that the following specimens be sent for diagnostic testing at CDC:

Naegleria fowleri is most likely to be detected in biopsy or autopsy tissue collected from the area surrounding the nasal-olfactory bulbs in the brain. However, CDC requests that tissues be collected from other CNS sites in addition to the olfactory bulb to look for other possible locations of ameba entry into the brain, such as around the auditory nerve.

All possible steps should be taken to minimize the possibility of cross-tissue contamination between CNS and extra-CNS tissues. These steps should, at a minimum, include:

Clinical Specimens for Diagnosis at CDC

CDC can accept the following specimens: