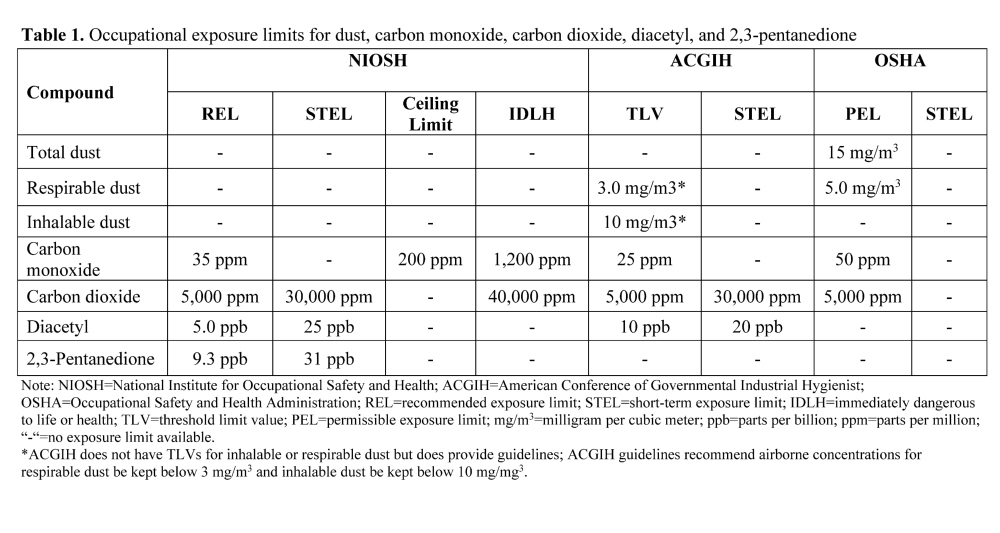 The NIOSH RELs for occupational exposures to diacetyl and 2,3-pentanedione are intended to reduce the risk of respiratory impairment (decreased lung function) and the irreversible (permanent) lung disease, obliterative bronchiolitis.

Task-based Exposures to Diacetyl and 2,3-Pentanedione

The establishment of a STEL is based on the concern that peak exposures may have greater toxicity than the same total dose spread out over a longer period. Air sampling during specific tasks, such as roasting, grinding, packaging, opening storage bins or containers with roasted coffee beans, and pouring and adding flavorings, is an important way to identify where peak exposures may occur and for targeting workplace interventions (e.g., engineering controls, ventilation changes) to reduce contaminant air concentrations.

Findings from studies of workers engaged in microwave popcorn and flavorings production were used by NIOSH to estimate worker risks for occupational lung disease by means of mathematical models of diacetyl exposure and indicators of potential occupational disease. In particular, NIOSH related multiple endpoints used to describe pulmonary impairment to levels of diacetyl exposure. Most of these endpoints are thought to occur early in the progression of more severe respiratory impairment. Table 2 shows different endpoints from a study of microwave popcorn workers. In evaluating the data, NIOSH concluded that the risk from exposure to an average airborne concentration of 5 ppb diacetyl over a 45-year working lifetime is about 1 to 2 excess cases of respiratory impairment per 1000 workers.

These estimates depend on several assumptions and limitations in data; therefore, the risks shown are imprecise. When using inexact estimates in making exposure recommendations, NIOSH chooses methods that generally favor protection of workers. Given there is residual risk at the REL, NIOSH recommends that exposures to diacetyl be kept below the REL of 5 ppb and as low as practical. Risk is best managed using a comprehensive safety and health program that includes engineering controls, exposure monitoring, routine medical surveillance, and employee training in good work practices.

Read “Coffee Workers at Risk for Lung Disease” and “Diacetyl and Food Flavorings” on the NIOSH Science Blog and share your comments.