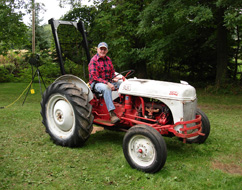 The best-known way to prevent overturn fatalities is the combination of a ROPS and seat belt use.1 Therefore, to maximize the tractor operator’s safety, NIOSH recommends that any tractor in use be equipped with a ROPS and a seat belt.

NIOSH recognizes that tractors without ROPS are still in use, often because ROPS are not commercially available for older tractor models. To fill this worker safety void, NIOSH engineers developed cost-effective rollover protective structures (CROPS) that can be built onto a tractor after market. If the older tractor does not have a ROPS and cannot be equipped with a ROPS or CROPS, then NIOSH recommends retiring it from service.

In addition to having a ROPS (or CROPS) on the tractor, the operator should always wear a seat belt for maximum protection in the event of a tractor rollover.

Available data suggest that many tractors without ROPS are still in use. In 2011, the most recent year for which data were available, 59% of tractors in use were equipped with ROPS – meaning that 41% did not have ROPS.6 This was nearly the same as data from 5 years earlier,6  suggesting that growth of ROPS coverage seen in previous years had slowed.7 The continued use of older tractors without ROPS increases the risk for deaths and injuries in the event of a tractor overturn.

In 2008, NIOSH designed and tested CROPS for four tractor models: (1) Ford 8N, (2) Ford 3000, (3) Ford 4000, and (4) Massey Ferguson 135 in accordance with the same Society of Automobile Engineers (SAE) industry standard performance test SAE J2194 used for ROPS at that time.8 NIOSH researchers selected these four tractors for CROPS designs because they were in the top ten most popular and active older tractors based on a published analysis in 1998,9  and ROPS were not widely available for the selected models.

The NIOSH CROPS designs are available to be used either by

Certain parts must be manufactured by a facility that can bend 0.5-inch-thick plate steel (A572-Grade 50). Other parts can be manufactured using a band saw and a drill press. All welded parts must be welded by a professional welder using the appropriate welding procedures for a minimum temperature of -22°F (-30°C) as stated in the SAE J2194 standard. This is required regardless of temperature ranges in the end user’s local area.

The Ford 3000 and 4000 model tractors’ axle housings were designed to support the installation of a ROPS by the manufacturer. The Ford 8N passed an axle strength test with a factor safety of two when evaluated by an external research study.10,11 The Massey Ferguson 135 axle is very similar to the Ford 8N axle and is considered to be of equal strength.

In 2016 a new industry testing standard, International Organization for Standardization (ISO) 570012, replaced SAE J2194. The NIOSH CROPS have not been tested for compliance to the current ISO 5700 testing standard.

Users must build and install the CROPS per the NIOSH specifications and must not make any changes. Any deviation from the published designs or the installation of a CROPS will result in the CROPS not complying with SAE J2194.  In the event of a rollover, the operators will not be provided with the level of protection established by SAE J2194. 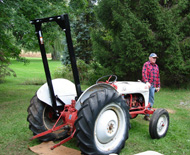 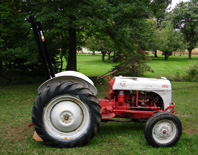 Ford 8N – rear and side views after CROPS installation

The NIOSH CROPS project conducted an outreach “proof of concept” effort to collect data from a sample of participants on the ease of installation and acceptance of the CROPS designs. The outreach efforts included installing the NIOSH CROPS in the states of New York, Virginia, Vermont, Pennsylvania, California, and West Virginia. The following groups facilitated installations:13,14

A total of 82 CROPS were installed in six states through this outreach effort. (View the 2012 Field Installation Pictures pdf icon[PDF – 2 MB])