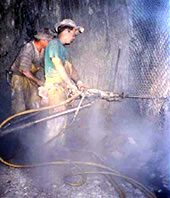 Airborne particles containing biological materials like fungi, bacteria and viruses (called “bioaerosols”) can have hazardous health effects. To study the effects of these bioaerosol particles, scientists are using new analytical techniques like DNA fingerprinting and immunological assays that can better identify and quantify potential hazards. However, these new techniques are in development and still require new and better methods of collecting bioaerosols to reduce handling and expedite processing of samples.

Dr. Bean T. Chen at the NIOSH Health Effects Lab in Morgantown, WV developed his research project to look at this need. While looking for ways to improve the collection and analysis of bioaerosols, aerosol scientist Dr. Chen developed a new design for a cyclone bioaerosol sampler. Acyclone samplerdraws air into a cylindrical chamberwhere the air flow is rotated. Particles of a sufficiently large size move toward the walls of the chamber by centrifugal force, where they are collected. Dr. Chen’s innovation was to bring the air in from the top of the sample chamber rather than from the side as in a conventional cyclone. This allows the samples to be collected in standard centrifuge tubes that are commonly used in biological laboratories. Bioaerosol samples can be processed directly in these tubes, which makes processing much easier, reduces costs, and eliminates the need to transfer material from the collection vessel to a new tube. Cyclone samplers can also use multiple tubes so that, for example, large bioaerosol particles collect in an initial centrifuge tube, medium-sized particles in a second tube, and the smallest particles on a filter. Particle size is important because smaller particles stay airborne longer and are more likely to be inhaled deep into the lungs.

Dr. Chen, biomedical engineer Dr. William Lindsley, and machinist David Edgell developed three different versions of the NIOSH bioaerosol sampler. All of the sampler designs are small and lightweight and can be worn by workers to allow the direct measurement of exposure to bioaerosols. Drs. Chen and Lindsley began the process of transferring the technology to the scientific and industrial health community by publishing their results in scientific journals and presenting them at conferences. The next step was to develop some prototypes to see how this invention could be used. Mr. Edgell manufactured over 300 of the bioaerosol samplers, which were then loaned free-of-charge to researchers. Some uses that researchers found for the new bioaerosol sampler include:

In addition to providing research on a variety of bioaerosols, these efforts resulted in useful feedback on the samplers and helped showcase this novel new design.

Ultimately, the goal is to license the sampler design to a manufacturer who can produce the the new bioaersolal sampler and make it commercially available to researchers and industrial hygienists. To date one company has indicated interest in the samplers. NIOSH is working with the National Technology Transfer Center in Wheeling, West Virginia to identify other possible industrial partners.