Incorporation of National Fire Protection Association (NFPA) 1986, Standard on Respiratory Protection Equipment for Tactical and Technical Operations, 2017 edition into NIOSH Self-Contained Breathing Apparatus (SCBA) policy statement on “Acceptance of Applications for the Testing and Evaluation of Self-Contained Breathing Apparatus for Use against Chemical, Biological, Radiological and Nuclear Agents”

The National Institute for Occupational Safety and Health (NIOSH) is updating its policy statement on “Acceptance of Applications for the Testing and Evaluation of Self-Contained Breathing Apparatus for Use Against Chemical, Biological, Radiological and Nuclear Agents.”

This policy change is being made coincident with the addition of requirements related to the use and operation of these devices in the National Fire Protection Association (NFPA) 1986, 2017 edition, Standard for SCBA used in Tactical and Technical Operations.  This letter serves as the policy change modifying the above referenced NIOSH policy statement to incorporate SCBAs meeting the requirements of NFPA 1986:2017, or subsequent editions as part of the current policy statement.

Consistent with the National Technology Transfer and Advancement Act of 1995 and OMB Circular A-119, NIOSH participated in the NFPA consensus standards development process for NFPA 1986.  Adoption of this standard into the above referenced policy statement meets the intent of this act.

This letter informs applicants of additional requirements that a SCBA will be evaluated against prior to receiving NIOSH approval and provides the procedures for submitting applications.  When first announced in 2001, the need to meet requirements for the CBRN protection level was voluntary in both the NFPA and the NIOSH approval processes, as specified in Attachment Apdf icon to the 2001 CBRN policy statement.  However, in the 2007 revision to NFPA 1981, the requirement for SCBA to obtain CBRN-level approval was made a mandatory part of NFPA 1981.  This requirement also holds true for NFPA 1986:2017.  As a result, all NFPA 1981 or 1986 approvals will require compliance with the additional CBRN requirements.

In April 2000, NIOSH entered into a Memorandum of Understanding with the National Institute for Standards and Technology (NIST), the Occupational Safety and Health Administration (OSHA), and the National Fire Protection Association (NFPA) to jointly work on developing standards for all types of counterterrorism equipment. NIOSH and NIST initiated Interagency Agreements with the U.S. Army Edgewood Chemical Biological Center (ECBC) (which at that time was the U.S. Army Soldier and Biological Chemical Command (SBCCOM)) for development of respiratory protection standards, test procedures, and laboratory support.  The new procedures for SCBA certification were consistent with the guidance of the Federal Emergency Management Agency (FEMA) and NFPA, which called for the use of SCBAs when hazards are unknown (i.e., within the first hours of an event).

NIOSH initiated its voluntary approval program pursuant to 42 CFR Parts 84.60(b) and 84.63(c). These sections provide NIOSH with the authority to issue approvals for respirators not specifically addressed in Part 84 and to develop additional requirements that the agency determines are “necessary to establish the quality, effectiveness, and safety of any respirator used as protection against hazardous atmospheres.”  NIOSH has continued to conduct that program issuing special approvals and approval labels identifying the SCBA as appropriate for use against CBRN agents.

Summary of the CBRN Requirements for Approval

The minimum requirements for CBRN-level protection determinations made by NIOSH are as follows:

Application procedures for CBRN respirators are included in the “Standard Application Procedure for the Approval of Respirators Under 42 CFR 84.”

All approval application(s) shall: 1) be submitted concurrently to NIOSH (Records Room) and the Safety Equipment Institute (SEI) and 2) include a completed application package for each SCBA respirator model for which approval is requested.  NIOSH submittals must conform to the requirements outlined in the Standard Application Procedures.  Standard SCBA approval fees are applicable to each new approval sought.  Consultations with NIOSH are available and encouraged prior to submitting an application to enable an accurate determination of required test hardware to be made.  Your effort in following these procedures will assist NIOSH and SEI in ensuring an orderly approval process.  Applications will be processed in the order in which they are received by NIOSH. NIOSH will process CBRN SCBA applications as a priority.

NIOSH will continue to maintain and disseminate an approval list for the SCBAs approved under this program.  This list will be a prominent part of the Certified Equipment List (CEL), and will contain the name of the approval holder, model, component parts, accessories, and rated durations.

NIOSH will authorize the use of an additional approval label on apparatus that demonstrate compliance to the CBRN criteria.  This label is to be placed in a visible location on the SCBA backplate, e.g., on the upper corner or in the area of the cylinder neck.  The addition of this label will provide visible and easy identification of equipment for its appropriate use.  A sample label is shown below. 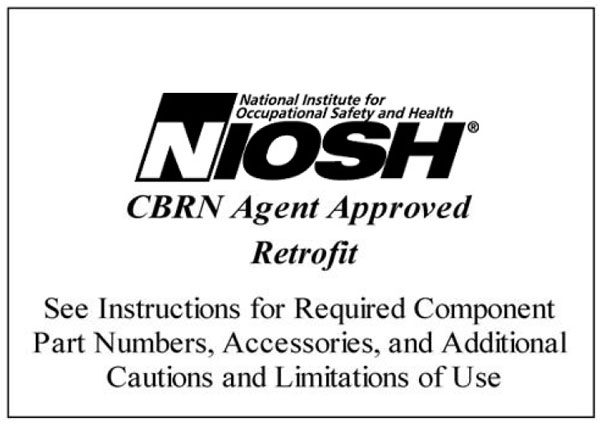 Cautions and Limitations for the CBRN SCBA must be incorporated into the applicants’ instructions for usepdf icon.

We hope this information is helpful to you.  Please feel free to contact Robert Stein at 412-386-6889 or by email at rstein@cdc.gov if you have any questions.