On October 15, 1999, at 0700 hours, the Apparatus Operator on Engine 4 was conducting a routine equipment check when he experienced problems with the Medtronic Physio-Control LIFEPAK® 500, which is an automated external defibrillator (AED). He brought the malfunctioning AED to the attention of the Assistant Chief and a Captain, explaining that when he turned on the AED, it shut down instead of self-testing. The Assistant Chief and a Captain had the AED brought into one of the fire department offices, where they placed it on the desk to check it out. When the AED was turned on again, the units message system indicated the battery should be replaced. They removed and checked the lithium battery and noted it had an expiration date of 2004. They replaced the battery in the unit and it was turned on. An explosion or battery rupture occurred, which blew out the back of the AED (see photos).

It was reported by the Assistant Chief and the Captain that the concussion from the explosion or battery rupture blew the Assistant Chief out the office door onto the floor and blew the Captain against the office wall. The office was filled with white acrid smoke which made breathing difficult. The Assistant Chief reported he received flash burns to the left arm, a sprained left wrist, and an injured back. The Captain reported he suffered upper respiratory inflammation from the acrid smoke. NIOSH investigators concluded that to reduce the risk of similar occurrences fire departments, emergency medical services, and other users of AEDs should

On October 15, 1999, at the start of the 0700 hours shift, a fire fighter was conducting a check of the equipment on Engine 4. The fire fighter pulled the LIFEPAK® 500 automated external defibrillator (AED) from the engine, took it inside, and placed it on a table to perform a routine check. The fire fighter turned on the unit, and the Light Emitting Diode (LED) readout flashed on then shut off. He took the unit back to the engine and attempted to turn it on, however, nothing happened. The fire fighter informed the Assistant Chief of the problem and demonstrated what had occurred. He turned the unit on, and the LED readout indicated the battery should be replaced. The Assistant Chief and a Captain took the AED into a small office to attempt to determine the problem. The AED was placed on a desk, and the Assistant Chief pulled the lithium battery pack to check the expiration date, which was 2004. The battery pack was replaced in the AED, and when the unit was turned on, an explosion or battery rupture occurred. The explosion or battery rupture blew out the back of the AED (see photo #2), and it was reported by the Assistant Chief and Captain that the concussion blew the Assistant Chief out the office door onto the floor and blew the Captain against the office wall. The office was filled with white acrid smoke which made breathing difficult. The Assistant Chief reported that he received flash burns to the left arm, a sprained left wrist, and an injured back, and the Captain reported that he suffered upper respiratory inflammation from the acrid smoke. Both fire fighters were transported to a local hospital, treated, and released.

Three other documented incidents involving this company’s AED units have occurred. According to the manufacturer, all three incidents were unwitnessed, and the explosion or rupture was contained by the soft carrying case. No injuries were reported in any of these incidents.

The manufacturer of this unit, Medtronic Physio-Control, has reported there have been 4 battery pack failures in 30,000 battery packs that are in use over the last 3 years.

Recommendation #1: Fire departments, emergency medical services, and other users of AEDs should follow the manufacturers instructions to replace battery packs immediately when the unit indicates a low battery or replace battery message.

Recommendation #2: The Food and Drug Administration, which is responsible for approval of medical devices, should continue follow up with Medtronic Physio-Control, manufacturer of the LIFEPAK® AED, to reduce the potential hazards with battery packs in these types of devices. 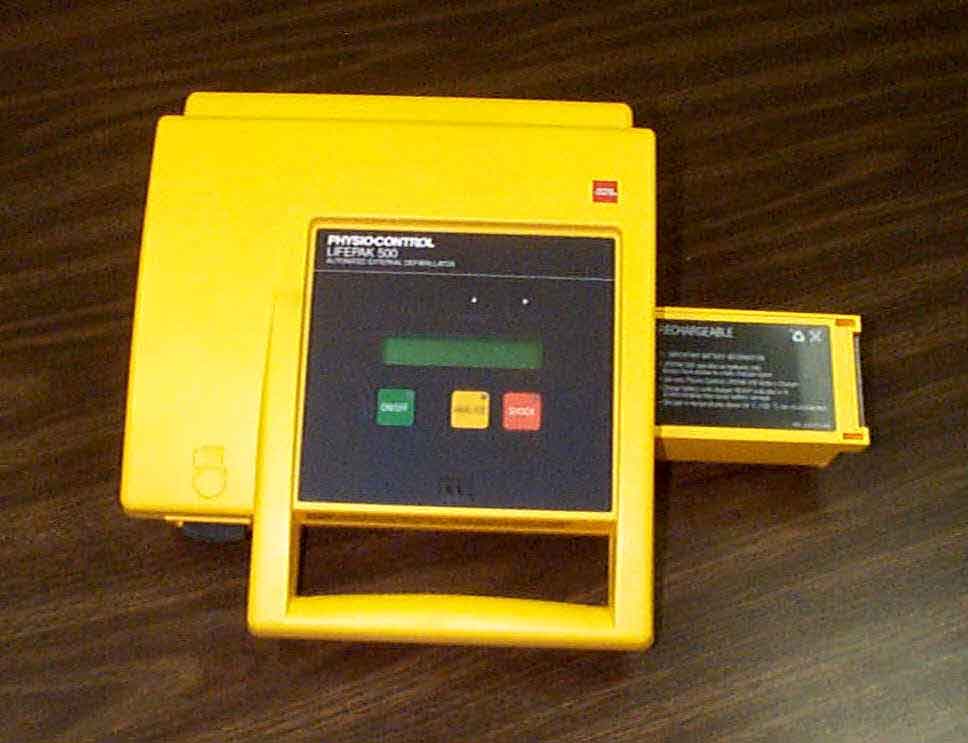 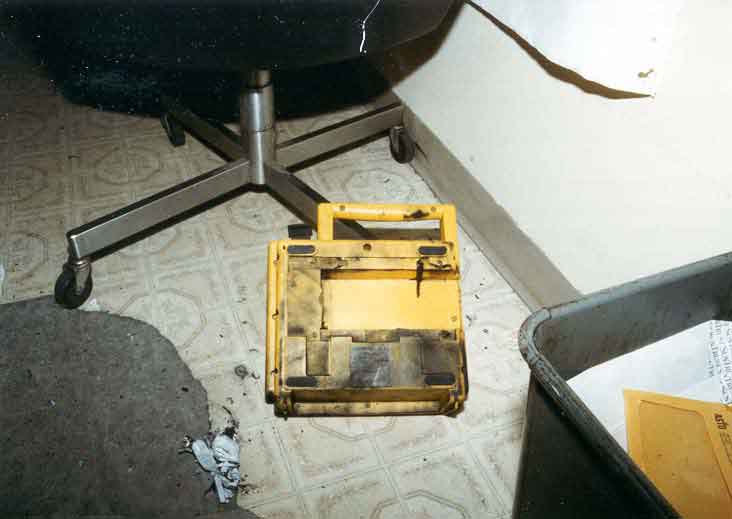 Photo 2. AED after Explosion or Rupture 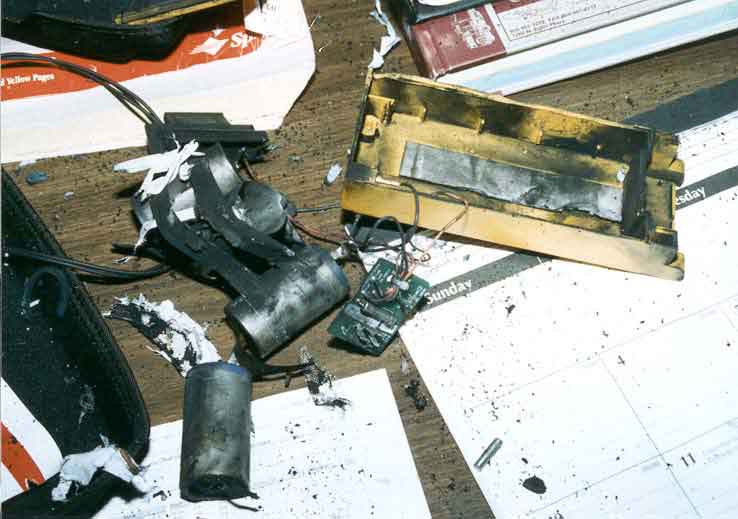 This notice is to serve as an update to this Division’s previous safety advisory dealing with explosions in the above named product manufactured by Medtronic Physio-Control Corporation.

The State fire Marshal’s Office has been in contact with numerous agencies in an attempt to develop all information possible to relay it to the appropriate agencies. During this investigation it has come to our attention that a possible “panic” condition is developing due to information spreading from unconfirmed and possible unreliable sources (i.e., the Internet).

The State Fire Marshal’s Office has not as of yet made any determinations of recommendations as to the continued use of the above products within the State of Florida. We are currently awaiting the results of testing being conducted by Medtronic Physio-Control Corporation and their related suppliers. Medtronic Physio-Control has been co-operating with the State Fire Marshals Office in this investigation and has pledged their continued co-operation. They advised that the incidence of any problems with their products worldwide have been extremely low but understand that any problems like those previously mentioned are cause for concern where lives & safety are at stake. They have asked that we include the attached letter from Medtronic Physio-Control Corporation with this update. (see Attachment #2)

At this time the exact cause for these incidents is still being investigated. We presently feel that Medtronic Physic-Control Corporation is interested in determining the source of these problems and address the needs for its correction.

All fire service, law enforcement personnel and other users of AED equipment should still be cognizant of the potential safety hazard but temper that with the fact that these devices are still an important piece of lifesaving equipment. At this time any discontinuance of use must be an agency decision.

If you have any questions or concerns you may contact Mr. Mitch Parrish, Vice President of Service, Medtronic Physio-Control Corporation at (425) 867-4491.

This letter is to provide you with accurate and up-to-date information about an incident involving the lithium batteries used in some LIFEPAK® 500 automated external defibrillators. We are concerned that some press and e-mail messages being circulated are not only incorrect but may cause unnecessary concern.

Since the LIFEPAK® 500 AED was introduced two and one-half years ago there have been four documented cases of sudden venting of a lithium battery, none involving patient applications. In one case reported to us on Friday, October 15, the battery was being handled by a firefighter and caused a minor injury; he and a co-worker were treated and discharged from a local emergency room.

All batteries, whether used in a medical device, your cell phone, a flashlight or any other application, are chemical packages that generate and store electrical energy, and have the potential to vent or rupture. The incidence of this problem is rare. We have had four occurrences in a population of approximately 144,000 lithium cells used in Physio products, some of which have been in service more than two years. Worldwide, there are another 360,000 cells in use in other applications; we have been advised of one other similar incident in this additional population.

We, in conjunction with the battery manufacturer, are conducting an evaluation of the four cells which have vented to ensure the venting was not due to an avoidable circumstance. From our initial review there is no indication to date of such a cause. We are continuing our evaluation and intend to exhaust all possibilities.

We remain convinced this battery technology is appropriate for use in AEDs. We recommend that you keep your devices in service.

We stand behind the quality of our products. If, at any time, you have questions about this issue or concerns about any Medtronic Physio-Control product, please call our customer hotline at 1.800.732.3088.