On March 19, 2003, a 53-year-old male volunteer Captain (the victim) was killed while enroute to a hazardous materials (Hazmat) training exercise. The victim was riding in Engine 91(E91) on the front passenger side when it left the roadway and careened into a ditch. After traveling over a hundred feet in the ditch, the Engine struck a tree on the front passenger side of the vehicle. The victim was pinned in his seat by the wreckage, and although extrication was attempted shortly thereafter, the victim died of his injuries while inside the apparatus. 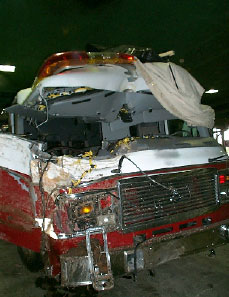 On March 19, 2003, a 53-year-old male volunteer Captain was killed in a fire apparatus crash while enroute to a Hazmat training exercise. On March 20, 2003, the U.S. Fire Administration (USFA) notified the National Institute for Occupational Safety and Health (NIOSH) of this fatality. On April 15-17, 2003, a safety and occupational health specialist and the Team Leader of NIOSH’s Fire Fighter Fatality Investigation and Prevention Program investigated the incident. Interviews were conducted with the Chief, Assistant Chiefs, and with other fire fighters from the department involved in the incident. Also, the district Fire Marshal and a representative from the Oregon Fatality Assessment and Control Evaluation Program were interviewed. The Oregon State Police accident report was reviewed. The NIOSH investigation team reviewed copies of the Department’s standard operating procedures, and the training records of the victim and driver of the apparatus. Additionally, pictures of the incident scene were reviewed, and the incident site was visited and photographed.

The combination fire department has 85 volunteer uniformed personnel and six paid officers. The department serves a population of approximately 21,000 in an area of about 185 square miles.

Driver Training
The driver operator had over eight years of fire fighting experience with this department and had completed driver training on topics such as defensive driving, driving and operations, driver preventive maintenance, and driving laws and policies.

Equipment
The apparatus involved in this incident was a 1999 closed-cab engine. It was equipped with a 750-gallon (baffled) water tank which was full at the time of the incident. The engine was approximately 8 feet 6 inches wide with a wheel base of 195 inches and a gross vehicle weight of approximately 42,000 pounds. This same engine was in a similar incident that required extensive repairs approximately six months prior to the fatal crash. The department conducts monthly maintenance checks on their vehicles and maintains written records. They also are exempt by law from obtaining a yearly State vehicle inspection.

Road Conditions/Weather
The incident occurred at approximately 1947 hours on a two-lane county roadway with a posted speed limit of 35 mph. A light rain was falling at the time of the incident. The ambient temperature was approximately 50° Fahrenheit. The asphalt roadway did not have a shoulder. A grassy ditch approximately 40 inches deep paralleled the road. The base for the roadway was recycled asphalt. Each lane was approximately 9 feet from the double-yellow center lines to the white fog line on the side of the road (Photo 1).

On March 19, 2003, a 53-year-old male volunteer Captain (the victim) was fatally injured when the engine he was riding in left the road and struck a tree. At approximately 1920 hours the combination department began participating in a multi-agency hazardous materials drill with a regional hazardous materials response team. Rescue 91 (R91) was dispatched from the station on the first alarm and proceeded to a staging area approximately 200 yards from the mock site. Engine 91 (E91) was toned out on the second alarm and while enroute to the site, dispatch informed E91 to approach the site from the east and provide traffic control. E91 changed course to respond from the east. Note: All vehicles responding to the incident were to respond under Code 1 conditions. Code 1 is operating the emergency vehicle under non-emergency conditions. The driver/operator proceeds without warning devices and obeys all traffic laws. As a car approached E91 on the narrow road, the engine’s rear wheels left the road surface, which was crumbling at the edges, and entered a ditch that was approximately 40 inches deep (Photo 2). The driver/operator attempted to steer the engine back onto the road, but hit a driveway that was at the same level as the road and perpendicular to the ditch. The engine bounced over the driveway and back into the ditch where it hit a second driveway leading to a field. The engine again bounced over the second driveway (field access) and reentered the ditch where it slid into a tree and came to rest in the ditch (Diagram, Photo 3).

The front passenger side of the cab was crushed and the driver/operator could not see the victim. The driver/operator tried to call dispatch on the radio, but the radio was inoperable from the crash. He called out for the victim, but did not get a response. He then called out for the Assistant Chief seated in one of the forward facing jump seats and got a response that he was alright. The Assistant Chief contacted dispatch on his portable radio indicating that E91 was in a ditch with an entrapment. Dispatch returned the call to verify that this was an actual call and not part of the training.

The driver/operator exited the apparatus and went to the front passenger side of the engine to assess the situation. The victim’s head was visible and he was breathing, but was unresponsive. The tree and part of the vehicle’s dashboard were compressed against the victim.

Medic 91 (M91) was the first to arrive on the scene from a prior run. The Captain and a paramedic from M91 entered the rear of E91 to provide life saving support to the victim. Engine 61 (E61) arrived with three fire fighters, one of whom was acting as the officer in charge and assumed Incident Command. The other firefighters from E61 used chain saws to cut the tree away from the apparatus. The crew damaged four chain saws in their unsuccessful attempt to remove the tree. Approximately 8 feet of the main trunk of the tree remained lodged in the front of the apparatus pinning the victim The Assistant Chief of Operations arrived in Car 1 (C1) and parked in the middle of the road towards the front of E91 (Diagram). The Battalion Chief and firefighters from R91 responded from the training site and positioned their apparatus in front of C1. The Assistant Chief of Operations was assisting R91, and they formed two crews and attempted to use their hydraulic tools to free the victim. Due to R91’s positioning, the lines for the hydraulic tools were too short to reach the victim’s apparatus on their initial attempt. After the crews extended the lines, both tools malfunctioned and went out of service. One tool was repaired and the Battalion Chief was having extreme difficulty cutting the roof away from the cab due to the cab being reinforced with layers of aluminum (Photo 4).

A Life Flight helicopter was called to the scene, and upon arrival they pronounced the victim dead. Extrication efforts continued and the victim was removed from the apparatus at approximately 2140 hours.

The cause of death as reported by the coroner’s office was positional asphyxiation.

Recommendation #1: Fire departments should develop and enforce standard operating procedures (SOPs) on the safe and prudent operation of emergency vehicles. 1-5

Discussion: NFPA 1500 § 4-2.3 states: “Drivers of fire department vehicles shall be directly responsible for the safe and prudent operation of the vehicles under all conditions. . . “ NFPA 1451 § 5.3 states that fire department personnel must be trained in and exercise applicable principles of defensive driving techniques under both emergency and non-emergency conditions. Drivers should have a thorough knowledge of the rules governing speed for emergency vehicles in their own jurisdictions and the jurisdictions of their mutual-aid partners. Fire departments should develop standard operating procedures (SOPs) for the safe and prudent operation of emergency vehicles which include all departmental policies and procedures and all applicable State and local laws. SOPs should be made available to all vehicle operators and should be incorporated into training. SOPs for driving fire department vehicles during non-emergency travel and emergency response should include, but not be limited to, the principles of skid avoidance and the effects on vehicle control of liquid surge, load factors, general steering reactions and speed. Procedures for emergency response should emphasize that the safe arrival of fire department vehicles and personnel at the emergency scene is the first priority. The most common causes for loss of control are driving too fast for road conditions, failing to properly appreciate weight shifts of heavy emergency vehicles/apparatus, and failing to anticipate obstacles.

Discussion: Driver training should be provided to all driver/operators as often as necessary to meet the requirements of NFPA 1451, but not less than twice a year. This training should be documented and cover defensive driving techniques during emergency and non-emergency conditions. Additionally, fire departments’ driver training should be in accordance with NFPA 1451, Standard for a Fire Service Vehicle Operations Training Program and NFPA 1002, Fire Apparatus Driver/Operator Professional Qualifications. During this training, each driver should operate the vehicle and perform tasks that the driver/operator is expected to encounter during normal operations to ensure the vehicle is safely operated in compliance with all applicable State and local laws.

Recommendation #3: Fire departments should develop a pre-incident planning program to include deployment of resources. 7, 8, 9

The planning staff for developing emergency scene risk management must identify items such as water supply problems, exposures, site accessibility, street conditions, potential for apparatus delays, and any other specific hazards that may relate to the site. One main consideration in pre-planning is to ensure that all members arrive on the scene safely. Just as SOPs enhance and augment fire department operations and training, pre-planning and identifying potential hazards is crucial to eliminating risks that may be encountered on the fireground, or while responding to the incident. All available routes should be considered when pre-planning a response to a site. Some routes, especially in rural areas, may only be considered under emergency situations due to their size, capabilities, and conditions. The road used to respond to the training site was a two-lane road with each lane approximately 9-feet wide and without shoulders. The apparatus was approximately 8 feet 6 inches wide not including the side mirrors. Driving the apparatus on this road at night without lights and sirens created a right-of-way issue in which the driver/operator had approximately only 3 inches per side to negotiate staying within the lane. 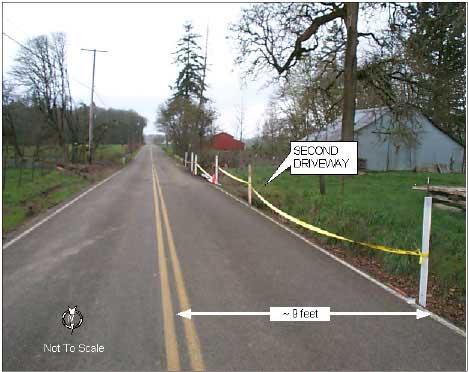 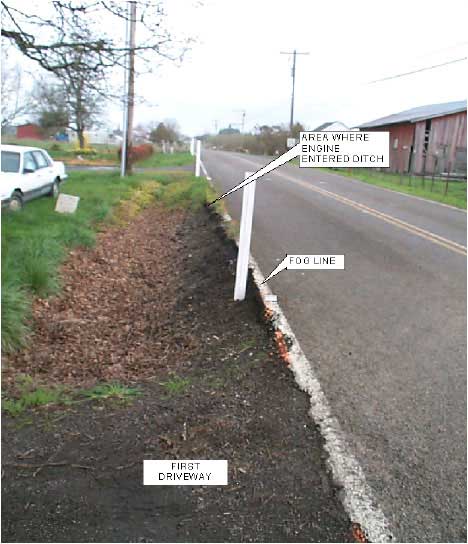 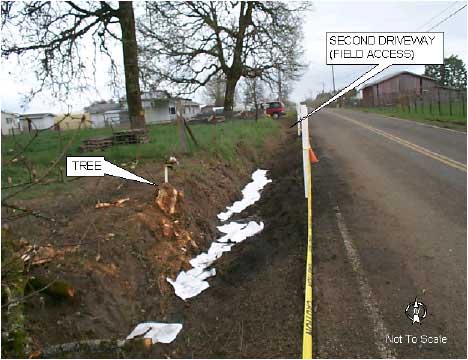 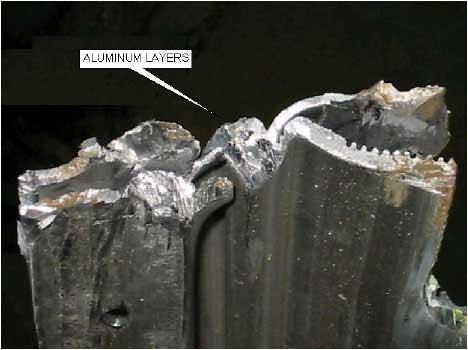