On January 13, 2003, a 46-year-old female career fire fighter/emergency medical technician (EMT) [the victim] died from injuries she received after falling from a moving, open-cab engine. The engine was responding to a reported airport emergency with an officer and a fire fighter/driver in the cab, a fire fighter/paramedic and a fire fighter/EMT (victim) seated in the open-cab jump seats. While enroute, as the engine was rounding a bend and accelerating up a slight grade to enter a highway, the victim lost her balance and fell from the apparatus onto the road. The victim was treated at the scene for multiple traumatic injuries and transported to a local hospital. She died from her injuries five days after the incident.

NIOSH investigators concluded that, to minimize the risk of similar occurrences, fire departments should:

Although there is no direct evidence that the following directly contributed to the fatality, this recommendation is being provided as a reminder of good safety practice. NIOSH investigators concluded that as a matter of prudent safety operations fire departments should: 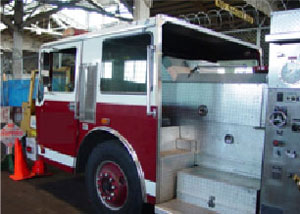 On January 13, 2003, a 46-year-old female career fire fighter/EMT (the victim) died from injuries received when she fell off of a moving, open-cab engine. On January 15, 2003, the U.S. Fire Administration (USFA) notified the National Institute for Occupational Safety and Health (NIOSH) of this fatality. On February 25, 2003, two safety and occupational health specialists from the NIOSH Fire Fighter Fatality Investigation and Prevention Program investigated the incident. The NIOSH team met with the Captain of the Engine Company, the Department Safety Officer, the Battalion Chief, the Deputy Chief of Operations, the Director of Training, the local International Association of Fire Fighters President, and crew members who were on the responding apparatus. They also spoke with police and other investigating officials by phone. The police report, training records of the victim, standard operating procedures (SOPs), department and State training requirements, dispatch sheets, apparatus maintenance records, and the death certificate were reviewed.

Training The victim had training in accordance with State and department requirements that included 17 weeks of training for NFPA Fire Fighter Levels I & II, and an additional 18 months of supervised training for department fire fighter certification. The victim was a certified Emergency Medical Technician, and had training in Apparatus Operation, First Responder, Live Fire Training, Defensive Driving, and Disaster Preparedness. The department training guidelines are in compliance with, and identical to, the State fire fighter training requirements.

Equipment The apparatus in which the victim was riding when the incident occurred is a 1989 open-cab engine that was being used as a relief piecea while the regularly assigned engine was in the shop for maintenance. The seatbelt was a lap-only type and was in good condition and working properly. Fire department apparatus are exempt from State inspection requirements; however, it is standard department procedure to perform vehicle inspections three times per year, as well as, daily recorded maintenance checks of the tires, engine, cab, brake system, tools and equipment.

Weather / Road Conditions The incident occurred on an on-ramp that merges into three southbound lanes of an interstate highway. The ramp descends slightly into a fairly sharp right turn then it gradually ascends up to the point where the ramp merges into the highway (Diagram 1). The single-lane on-ramp is 30 feet wide and made of concrete. The ramp speed limit is posted at 20 mph with a 55 mph maximum highway speed at the merge point.

At the time the incident occurred, there was no precipitation and the pavement was dry. The sky was overcast with a temperature of approximately 57º F and a wind speed of about six miles-per-hour (mph). It was dark and the roadway was illuminated by streetlights. The driver of the engine estimated the speed to be approximately five to ten mph when the incident occurred.

a Competent person is defined by OSHA as one who is capable of identifying existing and predictable hazards in the surroundings or working conditions which are unsanitary, hazardous, or dangerous to employees, and who has the authorization to take prompt corrective measures to eliminate them.

On January 08, 2003, at 1720 hours, a career fire department was dispatched for a reported airport emergency. The department responded in an open-cab engine that was being used as a relief piece while the regularly assigned engine was in the shop for maintenance. The majority of the department relief engines are the open-cab style and this type of apparatus was familiar to the victim. It is estimated that the victim had responded to approximately 30 calls on this particular relief piece prior to the incident.

Hearing protection is required to be worn due to noise from the engine, and the proximity of the open-cab seats to the motor housing. Earmuffs are available, and are to be worn by all fire fighters when riding in these seats. The victim had taken earmuffs with her when she boarded the engine.

The apparatus left the station with an officer and fire fighter/driver in the front enclosed cab, a fire fighter/paramedic and a fire fighter/EMT (the victim) seated in the open area jump seats. The victim, who was seated directly behind the driver, gave the “thumbs-up” signal that indicated she was seated securely and restrained (Photo 1). The driver then exited the station, made a sharp right turn into the street, traveled through a traffic light and then made a sharp left turn to enter the highway on-ramp.

Although it cannot be verified because no one directly witnessed her actions, it is believed at some point after boarding the engine the victim placed her earmuffs onto a railing above the motor housing near her seat. The movement of the engine may have caused the earmuffs to slide down the railing and out of her reach from a seated position (Photo 2). It is surmised that the victim released her seat belt to retrieve the earmuffs just as the engine was turning to the right at the bottom of the ramp and accelerating up to the highway merge point. When doing so, she may have lost her balance and fell from the engine onto the highway on-ramp. The fire fighter/paramedic seated in the adjacent jump seat pressed the emergency buzzer and called for the driver to stop. The driver saw the victim lying on the road through his side-view mirror and immediately brought the engine to a stop near the right side of the on-ramp. All personnel on-board immediately went to her side to begin emergency care and provide traffic control. The Officer on the scene called for medical assistance. Emergency Medical Services were dispatched at 1723 hours. Rescue units arrived within minutes and began advanced life support. The victim was transported to a local trauma center. She died from her injuries on January 13, 2003, five days after the incident.

The death certificate listed the cause of death as multiple traumatic injuries.

Recommendation #1: Fire departments should ensure that all persons responding in emergency apparatus are wearing and secured by seat belts or safety restraints at all times the vehicle is in motion. 1, 2

Discussion: Fire fighters and emergency responders make many life-and-death decisions during a tour of duty, and one of the most important for their own safety is securing the seat belt after climbing aboard a responding emergency apparatus. It is equally critical that personnel remain seated and restrained until they have arrived at their destination and the apparatus has come to a safe stop.

The fire department involved in this incident has a written policy requiring the use of seat belts and those procedures were followed initially upon departing the station. However, it is believed that the victim released her seat belt just minutes after giving the “go ahead” signal to the driver indicating that she was safely seated and secured.

NFPA 1500 states that “seat belts shall not be released or loosened for any purpose while the vehicle is in motion, including the donning of respiratory protection equipment or protective clothing.” Departments should enforce and repeatedly train all personnel on safety rules, including the use of safety restraints when riding in emergency vehicles.

Recommendation #2: Fire departments should ensure, when feasible, that each crew riding position is within a fully enclosed personnel area. 3, 4, 5

Discussion: The 2003 edition of the NFPA 1901 Standard for Automotive Fire Apparatus, Chapter 14 Driving and Crew Areas, is recognized as the “benchmark” from which newer apparatus are being designed. Chapter 14.1.1 states that “each crew riding position shall be within a fully enclosed personnel area.” Although newer apparatus are designed with fully enclosed cabs, older apparatus with jump seat riding areas are still in service. Some of these are equipped with safety bars or gates that are intended to prevent a fire fighter from falling out of a jump seat. However, these devices do not substitute for safety procedures that require fire fighters to ride in enclosed positions secured by an approved restraint system. It is recommended by NFPA 1901 that apparatus built to meet the 1979 or 1985 edition of NFPA 1901 (or equivalent Underwriters’ Laboratories of Canada [ULC]) be placed in reserve status and upgraded to incorporate as many features as possible, of the post 1991 recommendations for upgrading or refurbishing fire apparatus. These recommendations, some of which are listed below, suggest that fire departments should ensure that:

Apparatus not built to NFPA apparatus standards, or manufactured prior to 1979, should be considered for upgrading or relief.

The engine involved in this incident was a 1989 open-cab model and was used only as a relief piece during maintenance operations of assigned apparatus. At the time of the incident, the engine was not equipped with safety gates or bars. The department has been systematically replacing the open-cab units with newer apparatus that meet current specifications and safety requirements. Open-cab apparatus that remain in service as relief pieces are being retrofitted with safety barriers such as bars or gates that are installed in front of the seats in the open-cab area.

Although there is no direct evidence that the following directly contributed to this fatality, this recommendation is being provided as a reminder of good safety practice.

Recommendation #3: Fire departments should ensure equipment that is required to be used during emergency response is securely fastened and readily accessible. 3, 5, 6

Discussion: Fire fighters are exposed to fire scene and apparatus noise that may contribute to permanent hearing loss. To assist in preventing exposure to unacceptably high levels of noise, it is necessary for fire departments to identify the source, and then control and reduce potentially harmful noise levels, or provide fire fighters with personal hearing protection such as earmuffs.

The jump seat area of the open-cab apparatus was identified by the department’s safety office as an area where noise levels may at times exceed acceptable levels. Open-cab relief pieces are being systematically removed from service and replaced by newer apparatus with enclosed crew areas. However in the interim, fire fighters are required to wear hearing protection when riding in the open-cab jump seats. Earmuffs are provided by the department and can be donned prior to boarding the apparatus. However, a location in the open-cab area where hearing protection could have been secured within reach of a seated and restrained fire fighter may have eliminated the need for the victim to remove her seat belt in order to retrieve the earmuffs.