On April 7, 2002, a 29-year-old female volunteer fire fighter (the victim) was fatally injured when the engine in which she was riding overturned on the way to a confirmed brush fire. The victim was one of three volunteer fire fighters responding in the vehicle. The engine had just rounded a curve when it went off the road onto the shoulder, causing the driver to lose control and the engine to overturn. The driver and the front-seat passenger, who were injured, were assisted out of the engine through the windshield area and transported via ambulance to a local hospital for treatment. The victim was entrapped and had to be extricated by fire fighters. The victim was transported to a regional medical center where she was pronounced dead upon arrival. 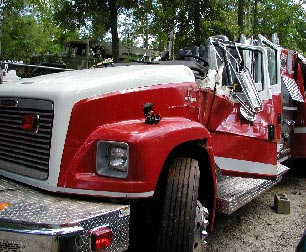 On April 7, 2002, a 29-year-old female volunteer fire fighter (the victim) was fatally injured when the engine in which she was riding overturned on the way to a confirmed brush fire. On April 8, 2002, the U.S. Fire Administration (USFA) notified the National Institute for Occupational Safety and Health (NIOSH) of this incident. On June 12-13, 2002, two safety and occupational health specialists from the NIOSH Fire Fighter Fatality Investigation and Prevention Program investigated the incident. The NIOSH team interviewed the Chief of the department, took photographs of the crash site and of the engine, and reviewed standard operating guidelines (SOGs), fire department pictures, the State Highway Patrol crash reconstruction report, training records of the victim, and the death certificate.

The volunteer department has 16 uniformed personnel and serves a population of approximately 2,000 in an area of about 4 square miles. The department requires 6 months of on-the-job training for new fire fighters. Further, the department requires that drivers watch training videos on safe driving and that they practice driving, on an as-needed basis, particular vehicles with an officer or other departmental personnel present. The driver of the apparatus involved had been a driver for the department for 4 years. He had received the required training for driving this vehicle; however, it was the first time he had driven it on an emergency call. The 29-year-old victim had been a volunteer fire fighter for 3½ years. She was certified as NFPA (National Fire Protection Association) Fire Fighter 1, Apparatus/Engine Operator and First Responder, and she had received live fire training.

Equipment. The 2002 four-door engine involved in the incident was approximately 34 feet long, 8 feet wide, 9 feet 3 inches high, with a gross vehicle weight a rating of 35,000 pounds. Per the manufacturer, the estimated service weight of the vehicle (with three people in the cab and miscellaneous equipment on board) was 32,285 pounds. It had a 970-gallon (baffled) water tank and a 30-gallon foam tank, both of which were full at the time of the incident. At the time of the incident, the department had owned the truck for 1 month.

Road Conditions/Weather. The incident occurred at approximately 1640 hours on a county roadway with a posted speed limit of 45 mph. The asphalt roadway was dry and the weather was clear. The shoulder of the roadway consisted of grass and sand.

On April 7, 2002, at 1624 hours, a call was made to Central Dispatch regarding a confirmed brush fire that threatened nearby structures. An engine with three fire fighters on board, including the victim, was one of several fire apparatuses that responded. When the incident occurred, the engine was heading east on a two-lane county road with the driver and one fire fighter/paramedic sitting in front and the victim sitting behind the driver. Note: According to the State Highway Patrol reconstructionist report, the estimated speed of the engine was 74 mph. The posted speed limit was 45 mph. The truck had just rounded a curve when it went off the road onto the right (eastbound) shoulder, causing the driver to lose control. The truck returned to the roadway, crossed both lanes of traffic, went off onto the shoulder of the westbound lane, slid sideways back across both lanes of traffic and overturned 1¼ times, coming to rest on the driver’s side on the right (eastbound) shoulder (Diagram).

At approximately 1641 hours, the driver radioed Central Dispatch for help, stating that his truck had been involved in a motor-vehicle crash. At 1643 hours a mutual-aid volunteer department was dispatched to provide extrication and two ambulances. A nearby career department, which was monitoring radio traffic, called Central Dispatch to offer assistance with the extrication. Civilian bystanders, first on the scene, helped the driver and the front-seat passenger out of the truck through the windshield area. As the two injured fire fighters were being loaded into an ambulance, the two mutual-aid fire departments arrived and began extricating the victim. The victim was reportedly lying prone with her head lodged between the rear seat and rear seat post, driver’s side. The ambulance crew instituted resuscitation efforts and then transported her to a regional medical center where she was pronounced dead on arrival. According to the police report, the victim and the other crew members in the engine were wearing three-point lap/shoulder harnesses at the time of the incident.

The death certificate listed the cause of death as mechanical asphyxia due to blunt head trauma.

Recommendation #1: Fire departments should develop and enforce standard operating procedures (SOPs) on the safe and prudent operation of emergency vehicles. 1–5

Discussion: NFPA 1500 § 4-2.3 states: “Drivers of fire department vehicles shall be directly responsible for the safe and prudent operation of the vehicles under all conditions. . . ” NFPA 1451 § 5.3 states that fire department personnel must be trained in and exercise applicable principles of defensive driving techniques under both emergency and nonemergency conditions. Drivers should have a thorough knowledge of the rules governing speed for emergency vehicles in their own jurisdictions and the jurisdictions of their mutual-aid partners. Fire departments should develop standard operating procedures (SOPs) for the safe and prudent operation of emergency vehicles which include all departmental policies and procedures and all applicable State and local laws. SOPs should be made available to all vehicle operators and should be implemented into training. SOPs for driving fire department vehicles during nonemergency travel and emergency response should include, but are not limited to, the principles of skid avoidance and the effects on vehicle control of liquid surge, load factors, general steering reactions and speed. Procedures for emergency response should emphasize that the safe arrival of fire department vehicles and personnel at the emergency scene is the first priority. The most common causes for loss of control are driving too fast for road conditions, failing to properly appreciate weight shifts of heavy emergency vehicles/apparatus, and failing to anticipate obstacles. In the state in which the incident occurred, emergency vehicles are permitted to exceed maximum speed limits so long as [they do] not endanger life or property. Further, the State traffic code regarding emergency vehicles states that these privileges do not relieve the driver of an authorized emergency vehicle from the duty to drive with due regard for the safety of all persons. . ..

Discussion: Driver training should be provided to all driver/operators as often as necessary to meet the requirements of NFPA 1451, but not less than twice a year. This training should be documented and cover defensive driving techniques during emergency and nonemergency conditions. Additionally, fire departments’ driver training should be in accordance with NFPA 1451, Standard for a Fire Service Vehicle Operations Training Program and NFPA 1002, Fire Apparatus Driver/Operator Professional Qualifications. These standards state that departments should establish and maintain a driver training education program and each member should be provided driver training not less than twice a year. During this training, each driver should operate the vehicle and perform tasks that the driver/operator is expected to encounter during normal operations to ensure the vehicle is safely operated in compliance with all applicable state and local laws.

a The National Highway Traffic Safety Administration (US Department of Transportation) defines Gross Vehicle Weight Rating as the maximum rated capacity of a vehicle, including the weight of the base vehicle, all added equipment, driver and passengers, and all cargo loaded into or on the vehicle. 1