On August 19, 2001, a 52-year-old male volunteer fire fighter (the victim) died after he lost control of the tanker truck he was driving when the right front tire ruptured, resulting in a blowout. The truck struck a large boulder and tree, entrapping the victim in the cab. He was extricated from the truck, and the Medical Examiner pronounced him dead at the scene.

On August 19, 2001, a 52-year-old male volunteer fire fighter (the victim) died when he lost control of the tanker truck he was driving after a tire blew out. On August 21, 2001, the U.S. Fire Administration notified the National Institute for Occupational Safety and Health (NIOSH) of this incident. On September 4, 2001, a crash reconstructionist contracted by NIOSH visited and photographed the incident site and the truck. On November 15, 2001, a Safety and Occupational Health Specialist and the Team Leader for the NIOSH Fire Fighter Fatality Investigation and Prevention Program investigated this incident. Interviews were conducted with the Chief of the fire department involved and members of neighboring fire departments who had responded to provide mutual aid. The NIOSH team reviewed copies of photos, police and crash reconstruction reports, the death certificate, the victim’s training records, and the department’s standard operating procedures (SOPs).

The truck involved in this incident was a 1973 cab over entry with an aluminum 3,000-gallon water tank. At the time of the incident the water tank was empty. The gross vehicle weight of the truck was approximately 43,000 lbs. The truck was equipped with a lap seat belt safety restraint system for the driver and passenger positions. Department fire fighters conducted maintenance checks on the truck on a monthly basis and maintained written records. The department is exempt by law from obtaining a yearly State vehicle inspection.

The State does not require a commercial driver’s license (CDL) for persons operating emergency vehicles or apparatus; however, the victim held a current (CDL). The department does not have a written policy requiring the use of seat belts.

The road on which the truck was traveling is an interstate highway and is comprised of two eastbound and two westbound lanes. The surface of the highway is constructed of a large, coarse, bituminous material. The highway had fog edge lines, rumble strips, and paved shoulders, and it was straight and level in the area of the collision. The road had a posted speed limit of 65 mph for cars and 55 mph for trucks. Weather conditions on the day of the incident were clear and the highway was dry.

On August 19, 2001, a volunteer fire fighter (the victim) was driving a tanker truck back to the fire station from a garage where it had been taken to have the tank pump capped. The garage was approximately 70 miles from the fire station.

At approximately 1149 hours, the truck was traveling eastbound on the interstate highway. At approximately 1249 hours, the victim maneuvered the tanker to pass a tractor trailer. The truck moved into the passing lane and overtook the tractor trailer. As the victim began to maneuver the truck back to his previous lane, the right front tire ruptured resulting in a complete blowout (Photo 1). Note: A post-crash examination by the State police and a crash reconstructionist determined that the tire was a 1979 model and that the outer shell fragment of the tire revealed a brittle and obviously aged material. The truck traveled approximately 200 feet on the eastbound side of the highway and shoulder and continued traveling approximately 335 more feet in a southeast direction into a grassy area. The corner of the front left bumper and the tire struck a boulder that was approximately 8 feet wide and 4 feet high (Photo 2). The truck overrode the boulder and struck a tree that was approximately 18 inches in diameter. The truck came to rest facing southeast in full contact with the tree and with the right front corner resting against a tree stump. The truck sustained heavy damage to the left front of the cab (Photo 3).

At approximately 1250 hours, a mutual-aid department and two ambulances were dispatched to the incident. A civilian emergency medical technician (EMT) and a physician witnessed the incident and found the victim lying sideways on the seat. The State police report indicated that the victim was not wearing his seat belt safety restraint system. Due to the significant intrusion of the instrument panel, the victim’s lower extremities were entrapped. The civilians were unable to find the victim’s pulse and began resuscitation efforts until an ambulance arrived.

At 1256 hours, Engine 93 responded with an Assistant Chief driving and two fire fighters on board. An ambulance arrived and the crew took over the resuscitation activities. Engine 93 arrived at 1304 hours and the Assistant Chief assumed the role of the Incident Commander (IC). The fire fighters from Engine 93 used cutters from a powered hydraulic tool and a reciprocating saw on the driver’s side door. The second ambulance arrived and the crew placed a heart monitor on the victim. They found no pulse and no electrical activity of the heart. An ambulance crew member called the hospital and received orders from a physician to discontinue life support activities. Hearing the radio dispatch, the Chief from the same department as Engine 93 responded. Arriving on the scene, the Chief did a scene size-up and assisted the IC. A tow truck arrived and pulled the truck away from the tree so that the victim could be extricated. The victim was pronounced dead by the medical examiner and transported from the scene.

The death certificate lists the cause of death as blunt force head trauma.

Recommendation #1: Fire departments should develop comprehensive apparatus maintenance programs in accordance with manufacturer’s specifications and instructions that include regularly scheduled inspections, documentation, and procedures for removing apparatus out of service until major defects are repaired. 1, 2

Discussion: Maintenance schedules should be established and recorded as an integral part of a well-planned maintenance program. The maintenance program should include daily, weekly, and periodic maintenance service checks. The daily maintenance check should follow the manufacturer’s handbook and should include items such as oil level, coolant level, batteries, visible and audible warning signals, fuel level, brakes, and tires. Tires should be checked for signs of wear, for drying or cracking, for cuts, proper pressure inflation, adequate tread depth, and condition of the valve stems.

At the time of the investigation, the State police and the crash reconstructionist determined that the right front tire which experienced the blowout was in a depleted condition. The department in this incident uses a checklist to perform and document weekly visual inspections of the department vehicles; however no procedures were in place on how to identify and remove an apparatus from service until major defects (e.g., the braking, steering, electrical, and coolant systems, hydraulic fluids, tires, and belts) were repaired and/or replaced. The State police and the crash reconstructionist determined that the tire was a 1979 model. The post-crash examination performed by the State police and the reconstructionist revealed that the outer shell fragment of the tire was brittle and cracked. In addition, pieces of the steel cords showed signs of rust from years of moisture exposure due to openings in the tread.

Recommendation #2: Fire departments should develop, implement, and enforce standard operating procedures (SOPs) on the use of seat belts in all emergency vehicles. 2, 3, 4, 5

Discussion: Fire departments should develop written SOPs for the safe operation of emergency vehicles and the use of seat belts. These SOPs should include all department policies, procedures, and any laws that pertain to that State and/or the department. The SOPs should be made available to all vehicle operators and should be implemented into their fire fighter training. Developing and following SOPs for safely driving fire department vehicles during nonemergency travel and emergency response include, but are not limited to, specific criteria for maintaining appropriate vehicle speed, crossing intersections, traversing railroad grade crossings, using seat belts, and using emergency warning devices. Such procedures for emergency response should emphasize that the safe arrival of fire department vehicles and personnel at emergency scenes is the first priority. Additionally, SOPs on the use of seat belts should be implemented and should apply to all persons riding in all emergency vehicles. It is important that all occupants are seated and wearing their seat belts before the vehicle is moved.

Discussion: Driver training should be provided to all driver/operators as often as necessary to meet the requirements of NFPA 1451, but not less than twice a year. This training should be documented and cover defensive driving techniques during emergency and nonemergency conditions. Sound defensive driving skills are one of the most important aspects of safe driving. Every driver/operator should be familiar with these basic concepts of defensive driving. They include anticipating other drivers’ actions, visual lead time, braking and reaction time, combating skids, evasive tactics, and knowledge of weight transfer.

Additionally, fire department driver training should be in accordance with NFPA 1451, Standard for a Fire Service Vehicle Operations Training Program, and NFPA 1002, Fire Apparatus Driver/Operator Professional Qualifications. These standards state that departments should establish and maintain a driver training education program and each member should be provided driver training not less than twice a year. During this training, each driver should operate the vehicle and perform tasks that the driver/operator is expected to encounter during normal operations to ensure the vehicle is safely operated in compliance with all applicable state and local laws. 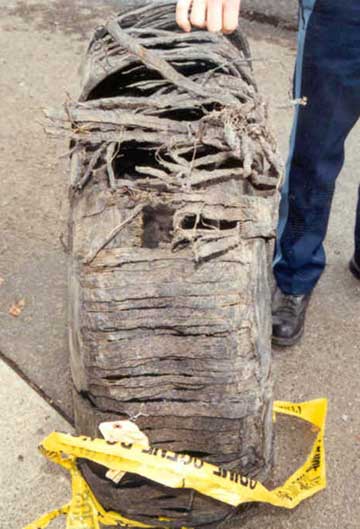 Photo 1. Tire That Experienced a Blowout on the Tanker Truck 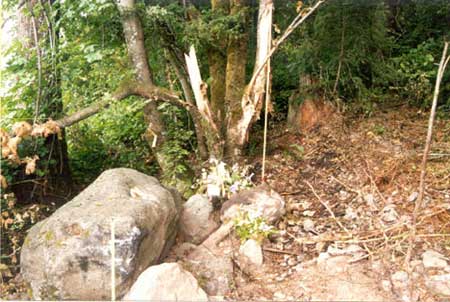 Photo 2. Boulder and Tree That the Tanker Truck Impacted 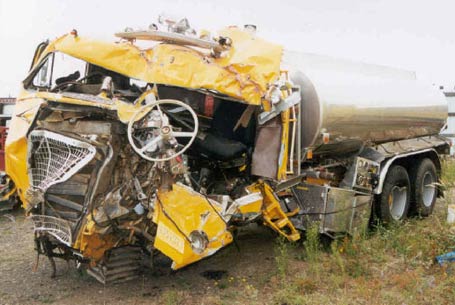