On March 3, 2000, a 27-year-old male volunteer fire fighter (the victim) died and a 32-year-old male volunteer fire fighter was severely injured after attempting to rescue an elderly woman. Volunteer fire fighters and public safety officers (trained as fire fighters) were dispatched at 0342 hours to a basement fire at an apartment building. As the crews were attacking the fire, a call came in from Central Dispatch at 0454 hours reporting smoke in a nearby apartment building. At 0457 hours, public safety patrol units reported smoke showing and a female civilian trapped in the second apartment building. At 0459 hours, command advised the patrol units that four people (one Public Safety Officer [PSO], the victim, and Fire Fighters #1 & #2) from the basement fire were being sent to the second fire. The fire fighters arrived at the second fire and saw heavy smoke coming from the front door of the apartment building and a female civilian in an upstairs apartment window (see Diagram and Photo 1). The female civilian had her head out of the window calling for help. Two of the volunteer fire fighters (victim and Fire Fighter #1), with full turnout gear and SCBAs, proceeded up the stairs to attempt a rescue of the trapped female civilian. The victim and Fire Fighter #1 located the female civilian in the kitchen area and proceeded with her back toward the entrance to the apartment. The victim opened the apartment door and was confronted with heavy fire and extreme heat. They retreated back toward the kitchen area and decided to abort the rescue. The victim and Fire Fighter #1 proceeded down the hall (without the female civilian) to the bathroom where they broke out the window and attempted to climb out (see Diagram and Photo 2). Fire Fighter #1 passed out and fell into the bathtub as the victim continued trying to get out of the window. Personnel on the fireground saw the victim attempting to climb out the window and yelled for him to jump. Note: No apparatus or fire suppression equipment was at the second fire at this time. At 0511 hours, Engine 1 from a mutual-aid company arrived on the scene and threw a ladder to the window the victim was attempting to exit. At approximately 0515 hours, the victim was removed from the window and was transported by ambulance to a nearby hospital where he was pronounced dead upon arrival. At 0525 hours, personnel on the fireground of the second fire realized they had a second fire fighter trapped in the upstairs bathroom. Two fire fighters entered through the bathroom window and rescued Fire Fighter #1 who was then transported to a nearby hospital. Fire Fighter #1 suffered from smoke inhalation and third-degree burns to 30% of his upper body. The trapped female civilian was fatally injured in this fire. NIOSH investigators concluded that, to minimize the risk of similar occurrences, fire departments should 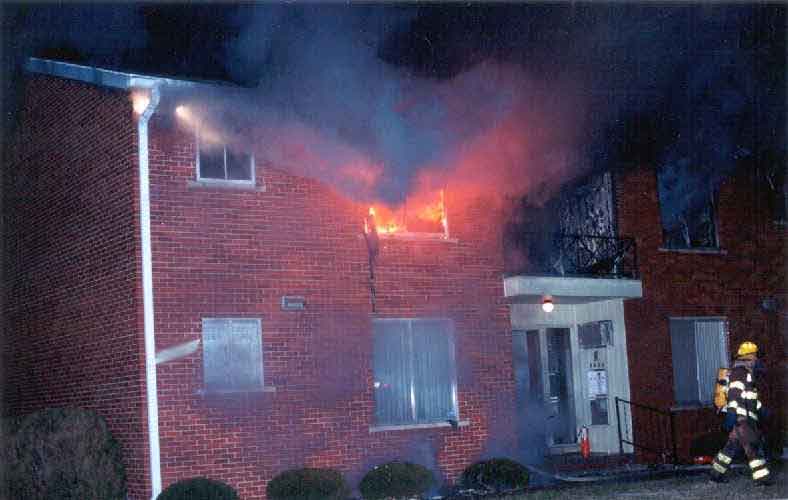 On March 3, 2000, a 27-year-old male volunteer fire fighter (the victim) died and a 32-year-old male volunteer fire fighter was severely injured after attempting to rescue a female civilian who was trapped in her apartment. Note: The female civilian was fatally injured in this fire. The National Institute for Occupational Safety and Health (NIOSH) was notified of this incident on March 6, 2000, by the United States Fire Administration. On April 3, 2000, a Safety and Occupational Health Specialist and a Safety Engineer from the Division of Safety Research investigated this incident. Meetings and interviews were held with the public safety department’s director, public safety officers, volunteer fire fighters, and the mutual-aid company’s officers and fire fighters who were on the scene at the time of the incident. Meetings were also held with the State Police Fire Investigator and the State of Michigan’s Department of Consumer and Industry Services personnel who investigated this incident. A meeting was also conducted with members from the county’s mutual-aid committee. The Standard Operating Procedures for the mutual-aid resolution for the county’s fire departments were obtained. A site visit was conducted, and photographs of the incident scene were taken. The buildings involved in this incident were two, two-story, Co-Op apartments of ordinary construction. Note: The site of this incident was just one of six arson fires concentrated in a 1½-mile area that the department had responded to within the 24-hour period in which this incident occurred. A follow-up visit was conducted on July 20th by a Safety and Occupational Health Specialist to interview Fire Fighter #1 and to examine the personal protective equipment (PPE) worn by Fire Fighter #1 and the victim (some of the PPE was not available for inspection).

The department involved in this incident is a public safety department that consists of one fire station with a total of 64 employees, of which 53 are public safety officers cross-trained as Fire Fighter Level I & II. Additionally, 30 volunteer fire fighters are on call for this department. The department serves a population of approximately 15,000 in a geographic area of 4.2 square miles. The victim was certified at Fire Fighter Level I & II. The victim had received training as a medical first responder, basic emergency medical technician, confined-space rescue, and hazardous-material awareness. The victim and the injured fire fighter each had 5 years of fire fighting experience.

The death certificate lists the cause of death as asphyxiation.

Discussion: An ICS should be defined and documented in writing, describing standardized guidelines for each situation, including routine and non-routine incidents. The system should establish roles and responsibilities for all personnel involved. It should ensure personnel accountability and safety and should provide a well-coordinated approach to all emergency activities. All fire department personnel should be thoroughly trained on this system and receive periodic refresher training, and all training should be documented. An ICS becomes more difficult when several fire departments respond to the same incident; therefore, a type of unified command system should be established. The unified command system can be used to coordinate command of the incident when several departments arrive on the scene.

Recommendation #2: Fire departments should ensure that accountability for all personnel at the fire scene is maintained.2,3

Discussion: Accountability on the fireground is paramount and may be accomplished by several methods. It is the responsibility of all officers to account for every fire fighter assigned to their company and relay this information to Incident Command (IC). A fire fighter should communicate with the supervising officer by portable radio to ensure accountability and indicate completion of assignments and duties. One of the most important aids for accountability at a fire is the Incident Command System (ICS). As a fire escalates and additional fire companies respond, communication assists the IC with accounting for all fire-fighter companies at the fire, at the staging area, and at rehabilitation. With an accountability system in place, the IC may readily identify the location of all fire fighters on the fireground. Additionally, the IC would be able to initiate rescue within minutes of realizing a fire fighter is trapped or missing.

Recommendation #5: Fire departments should ensure that adequate fire control forces and fire suppression equipment are on the scene and available for deployment for fire control activities.4,7

Discussion: Fire control forces are the fireground personnel who are involved in gaining entry and access, providing support activities, and controlling the fire. Four critical factors are to be considered when developing a basic rescue size-up: the fire stage; the fire victims (number, location, and condition); effect of the fire on victims; and the capability of control forces to enter the building, remove or protect the victims, and control the fire.

The fire suppression equipment needed at a multifamily occupancy fire is outlined in the National Fire Protection Association (NFPA) Fire Protection Handbook. The NFPA suggests that, for this type of occupancy, the staffing should be at least three pumpers, one ladder truck (or combination apparatus with equivalent capabilities), one chief officer, and other specialized apparatus as may be needed or available.

Recommendation #6: Fire departments should ensure that Rapid Intervention Teams are established and in position.8,9

Discussion: A Rapid Intervention Team (RIT) should respond to every major fire. They should report to the officer in command and remain at the staging area until an intervention is required to rescue a fire fighter. The Rapid Intervention Team should have all the tools necessary to complete the job-e.g., a search rope, rescue rope, first-aid kit, and a resuscitator to use in case a fire fighter needs assistance. These teams can intervene quickly to rescue fire fighters who become disoriented, lost in smoke-filled environments, trapped by fire, involved in structural collapse, or run out of breathing air. Many fire fighters who die from smoke inhalation or flashover, or who are caught or trapped by fire, actually become disoriented first. In this incident, fire fighters were near the entrance (Fire Fighter #2 and PSO/Fire Fighter), but they were not designated as the RIT. 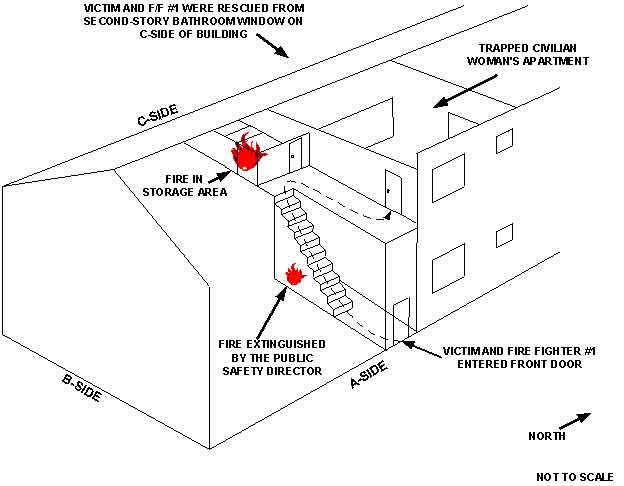 Diagram depicting the profile of the apartment building, showing the positions of the two fires,
the front door entered by the victim and Fire Fighter #1, and the second-story bathroom window. 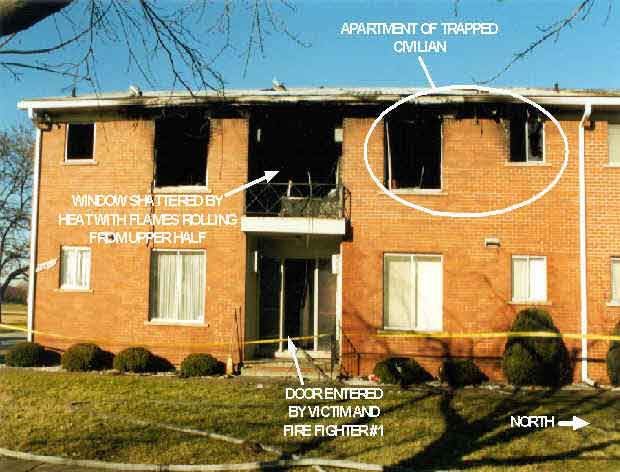 Photo 1. A-Side of the burned-out apartment building, showing the door entered by the victim
and Fire Fighter #1, the windows shattered by the heat, and the apartment of the trapped civilian. 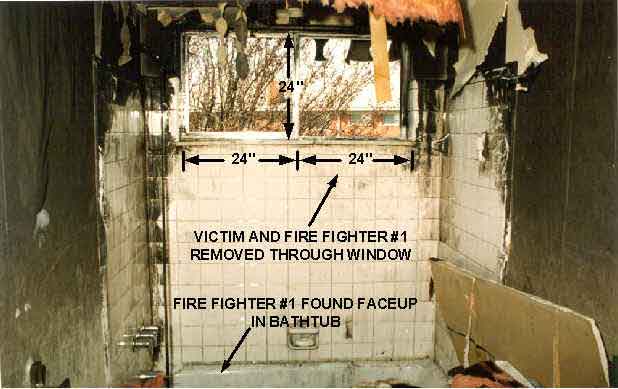 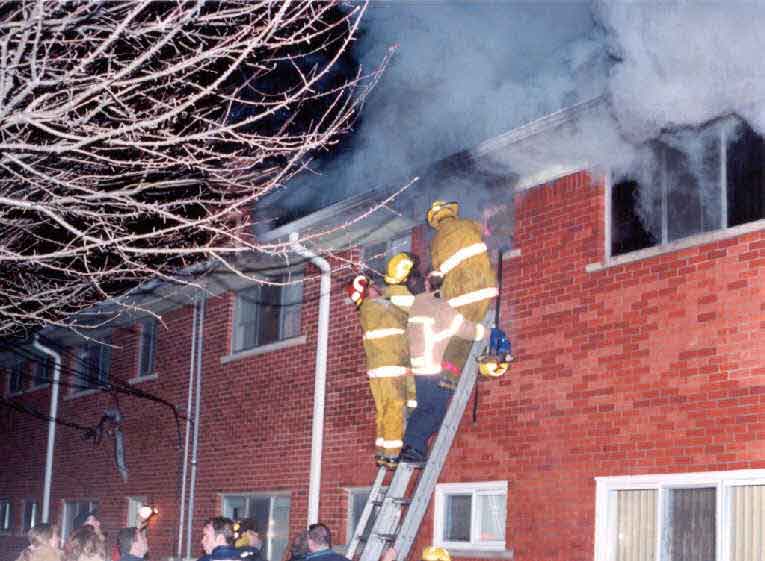