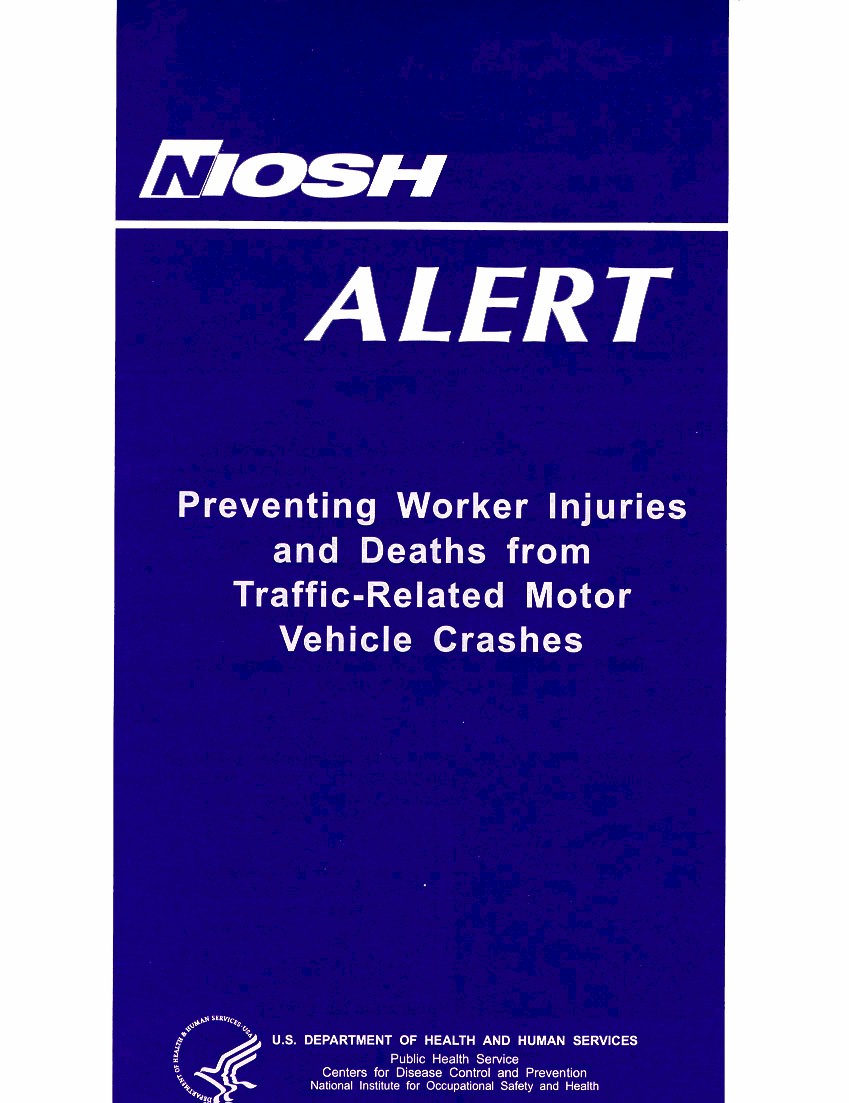 If driving is part of your job, take the following steps:

If you employ motor vehicle operators, take the following steps:

If you work or employ workers who work in construction or maintenance zones, take the following steps: 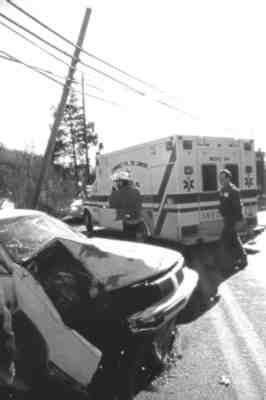 Photo by Earl Dotter(c)
Motor vehicle crashes are the leading cause of work-related fatalities.

This Alert examines traffic-related motor vehicle crashes that resulted in the death of a person who was at work when the incident occurred. Events that occurred while traveling to or from work are not included.

NIOSH requests your help in bringing this Alert to the attention of workers and employers. To raise the awareness of all workers who drive as part of their jobs, NIOSH also requests help from the following groups: safety and health officials, labor organizations, businesses and trade organizations, the academic and public health communities, advocacy groups, insurance companies, and other Federal agencies.

NIOSH data for the period 1990 through 1992 were taken from the National Traumatic Occupational Fatalities (NTOF) Surveillance System. NTOF is a death-certificate-based surveillance system composed of fatal occupational injuries to workers aged 16 and older. The NTOF data were supplemented with information from the National Highway Traffic Safety Administration (NHTSA) Fatal Accident Reporting System (FARS) for the same period. FARS, which is now called the Fatality Analysis Reporting System, is a census of fatal traffic crashes that includes data abstracted from many sources, including police records and reports from coroners and medical examiners. NTOF data were supplemented with FARS data to obtain information not included on death certificates. The actual number of fatal occupational traffic-related motor vehicle crashes from 1990 through 1992 is higher than reported in this Alert because death certificates are estimated to capture only 60% to 83% of the work-related fatalities associated with traffic-related motor vehicle crashes [Cone et al. 1991; Karlson and Baker 1978; Paulson et al. 1988; Russell and Conroy 1991].

For the period 1990­92, NTOF data indicate that 3,066 workers died from motor vehicle crashes related to traffic [NIOSH 1996]. Of these worker deaths, 2,523 (82%) were successfully matched with FARS data. These deaths involved

The characteristics of the fatally injured workers, the events, and the vehicles involved are described in more detail as follows.

Drivers, Passengers, and Pedestrians.—Most fatally injured workers were drivers (76%); 14% were pedestrians, and 9% were passengers.

Restraints.—Of the 2,158 fatally injured workers who were either drivers or passengers in a motor vehicle, 62% were not using any type of safety restraint. Thirteen percent used lap and shoulder belts, and nearly 5% used lap belts. Information about the type of restraint was not provided from the FARS data for 19% of these fatally injured workers.

Of the fatally injured drivers, 75% (1,451) had BAC results that were reported in the data:

Industry and Occupation.—Of the 2,523 workers fatally injured in traffic-related motor vehicle crashes, 35% (880) worked in the transportation/communication/public utilities industry. Industry sectors with the highest number of work-related deaths from motor vehicles were establishments engaged in trucking service (689) and construction (332). Sectors with rates three or more times the overall rate of work-related deaths from motor vehicles are listed in Table 2. Trucking service establishments had a rate 17 times the average annual rate of motor vehicle fatalities for all workers.

Of the 2,523 fatally injured workers, 43% (1,091) were employed in transportation and material moving occupations. Truck drivers had the highest number of work-related deaths from motor vehicles (973). Occupations with rates four or more times the average annual rate of death (per 100,000 workers) from motor vehicles are listed in Table 3. Truck drivers had the highest rate, followed closely by garbage collectors.

The 2,104 motor vehicles occupied by at least one fatally injured worker were of the following types:

The Other category includes such vehicles as vans, farm equipment being operated on a public highway, station wagons, and compact utility vehicles.

The 331 motor vehicles that struck a pedestrian were of the following types:

The FHWA under the U.S. Department of Transportation regulates and enforces Federal requirements relating to the safe operation and equipment for commercial motor carriers under 49 CFR† 350­399 as follows:

FHWA and NHTSA also have responsibilities in areas other than regulating motor carriers, drivers, and vehicle regulatory issues. NHTSA and the FHWA Office of Motor Carriers are responsible for overseeing State-sponsored or -conducted education and enforcement activities. In addition, all States and local communities have programs that can affect the work environment (i.e., the streets and roads). Components of the Child Labor Requirements Under the Fair Labor Standards Act and certain Occupational Safety and Health Administration (OSHA) regulations (for example, those for logging and construction) also address the safe operation of motor vehicles for particular populations or settings.

Traffic-related motor vehicle crashes are the leading cause of work-related injury death. They reduce our workforce by more than three workers each day. However, the environment in which these crashes occur is complex and may not be as controllable as other workplaces. Uncontrollable factors include aggressive or impaired drivers and motorists who ignore the dangers of sharing the road with commercial vehicles (for example, those who do not allow enough room for a truck to turn a corner).

Although the data reported here help us understand the magnitude and circumstances of U.S. worker deaths from traffic-related motor vehicle crashes, many factors remain unclear. Furthermore, because data are not available for total miles driven and miles driven classified by industry, occupation, season, and geographic location, the rates presented here per 100,000 workers may not accurately reflect the risk among worker groups.

Injury prevention and control technologies such as safety belts, air bags, daytime running lights, and vehicle design were developed to improve public safety; but they may also be applicable to workers whose jobs involve driving or travel by motor vehicles [CDC 1994]. Prevention efforts should include a combination of education, enforcement, and engineering controls. Companies with large fleets of motor vehicles can provide unique opportunities for researchers to study injury prevention strategies to begin answering the many remaining questions about risk factors and effective methods of injury prevention.

Companies must rely on their own experience when establishing safety procedures. Any employer who is developing and implementing a comprehensive traffic safety program for the workplace must gather and analyze internal data so that the company’s program targets the problems that will reduce the crashes, deaths, and injuries. The recommendations presented here highlight the issues to keep in mind when developing these safety programs. NIOSH recommends that employers take the following measures to prevent traffic-related deaths and injuries of workers from motor vehicle crashes:

Suzanne M. Kisner from the NIOSH Division of Safety Research and E. Lynn Jenkins from the NIOSH Office of the Director were the principal contributors to this Alert. Comments or questions concerning this Alert should be directed to Director, Division of Safety Research, National Institute for Occupational Safety and Health, 1095 Willowdale Road, Morgantown, WV 26505­2888; telephone, (304) 285­5894. We greatly appreciate your assistance in protecting the lives of American workers.

Russell J, Conroy C [1991]. Representativeness of deaths identified through the injury-at-work item on the death certificate: implications for surveillance. Am J Public Health 81(12):1613­1618.

*The most harmful event is defined in FARS as the event during a crash that produces the greatest personal injury or property damage.

DISCLAIMER: Mention of any company or product does not constitute endorsement by the National Institute for Occupational Safety and Health.